Santa Maria style barbecue is probably the least familiar of any barbecue style in the country, especially for those outside California. That’s likely due to how hyper-regional the menu and the fuel are, but also how limited its representation is outside the Santa Maria area. Even three hours in either direction, in Los Angeles or San Jose, if you find “Santa Maria” on a menu, you’ll probably end up with overcooked tri-tip, but there’s a lot more to Santa Maria style barbecue than one cut of beef.

I wrote yesterday about the cooks at the Elks Lodge #1538 in Santa Maria. They are masters of the top block sirloin cooked like huge kebabs on a steel rod over flaming red oak. When they cook it’s generally for a crowd, and the barbecue is served all at once. A hunk of sirloin the size of a brisket cooks up to medium in about three hours. In Texas we intentionally cook our briskets far beyond doneness to a point of tenderness, so it’s easy to hold for a long period of time, but a medium rare sirloin isn’t going to last long in a warmer before it gets up to well done and beyond. That issue is what led veteran cook Ike Simas to tell me, “Honestly and truthfully, restaurants can’t serve Santa Maria style barbecue, at least with the rods. That’s true Santa Maria style barbecue.”

What do they cook in the restaurants in Santa Maria? When I visited late last year, I found far less tri-tip than expected and a lot more steak. The long-standing restaurants like Jocko’s and Far Western Tavern had signature steak cuts like the Spenser and the Bulls Eye respectively. The menu at both Hitching Post I and II read more like one from a Dallas steakhouse with ribeye, T-bone, NY strip, and filet mignon. Of course they all have sirloin, but it’s cut down to an individual steak rather than being cooked as a whole top block. The simple fact is the “authentic” version of Santa Maria barbecue, cooking the whole top block, is more appropriate for large gatherings than individual diners. That’s why the local barbecue restaurants who favor the smaller cuts seemed a lot more like steakhouses than barbecue joints.

But the barbecue restaurants in the Santa Maria area put on a better show than any other steakhouse I’ve been to. Cast-iron grills loaded with meat licked by leaping red oak flames are commonly on display in area dining rooms. The wooden building that houses the Hitching Post I in Casmalia, just south of Santa Maria, looks like it belongs in a Western. Inside, chef Phil Meza mans the grill in a ball cap and safety glasses. Neither his brow nor his substantial mustache are the least bit damp. He jokes with our group after dinner that he simply doesn’t sweat, but he has a seriously powerful memory to keep all those orders straight on a grill packed tighter than a Safeway meat case.

We ordered a little of everything including the fantastic local artichokes blackened on the grill, and a garlicky linguica sausage that was juicy on the outside with a crisp casing on the outside. Our steaks, a ribeye, strip, and sirloin were all expertly cooked with a smoky char on every surface. A 12 oz. ribeye goes for $45, which doesn’t sound like much value at a rural steakhouse, but that includes more than steak. The relish tray and bay shrimp cocktail both look like fine dining relics, but the garlic bread dripping with butter is great, as are the grilled veggies. The hand cut fries are excellent too. A bowl of fluorescent sherbet at the end of the meal turned the clock back once again.

Bill Ostini owns the Hitching Post I, which was purchased by the family in 1952. That makes it the oldest operating Santa Maria style barbecue restaurant, but Bill’s brother Frank owns the most popular one. Thanks to the 2004 movie Sideways, Hitching Post II in Buellton captured instant fame. The Buellton menu is similar in every way to the Casmalia location, but the original was more satisfying in most categories. In fact, when we visited with the Elks Lodge members and told them we went to both Hitching Posts on the same day, the immediate question was about which we liked best. When we said the Casmalia location, they all nodded in approval. 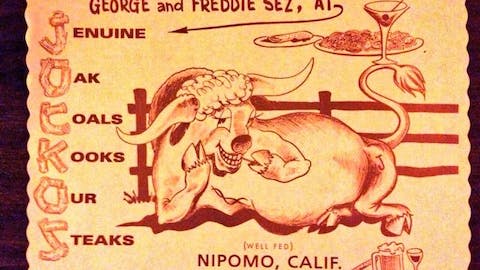 The head of the Elks’ barbecue committee also pointed us to Jocko’s in Nipomo which hugs the northern tip of Santa Maria. The bar gets packed because the waits can be long, but it truly is worth it for the best value in the area. The large version of their signature Spencer steak (a boneless ribeye) is just $27, and you can watch them grill it in a small shelter just behind the restaurant. That price also includes all the Santa Maria barbecue trimmings like a chunky tomato salsa, garlic bread, and pinquito beans. These are a smaller version of pinto beans, and are grown only in this area of California. Every restaurant we visited, no matter the quality of the meat, put out a good bowl of beans.

The Far Western Tavern was founded in 1958 in Guadalupe, but moved to Orcutt in 2012. It’s by far the fanciest of the Santa Maria style barbecue restaurants with white tablecloths and modern decor. I just wish they’d have included a grill that wasn’t hidden back in the kitchen. Their signature Bulls Eye steak is a boneless ribeye, and a 14 oz. cut will cost you $37. It was great, and perfectly cooked, but you can also eat well here for much less. One of their original menu items is a simple steak sandwich which now costs $12. Thin slices of round steak are tenderized with a jaccard before being grilled. It’s served on garlic bread, and makes for a rich, beefy sandwich that would be a bargain anywhere.

After meals at four steakhouses, I still hadn’t found a tri-tip on the menu. A few spots within Santa Maria cured my curiosity, but mostly their versions were poor. The name BBQ Land was promising, and the grill inside was fired with all wood. One of the cooks brought the wood into the kitchen in a shopping cart, but it didn’t help the sorry slices of tri-tip. The beef was already cooked, sliced, and chilled when we arrived. We then got a generous serving of dry, gray beef. They used a similar method at Shaw’s in the mid-afternoon when the grill was cool and our meat order came out of a sauté pan. A return trip at the height of dinner brought forth a better version, but it wasn’t good enough to bring me back a third time. Even the local Albertson’s had some slices of tri-tip hot and ready from the in-store rotisserie, but it fared no better than the poor restaurant versions. At Rancho Nipomo on the north side of town they switch things up and smoke the tri-tip, but they don’t take it out of the smoker until it’s overcooked and dry. 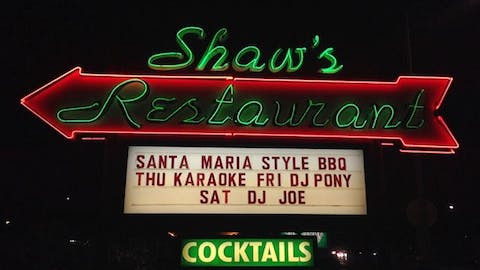 It was only at the Elks Lodge where I found a good slice of tri-tip. It was hot off the pit, seasoned heavily with salt, pepper, and garlic, with juicy bits of fat and charred crusty edges. After an hour on the pit, but pulled with a little pink left, it tasted more like barbecue than anything else I ate in town. After that first bite, every other tri-tip on that pit was then trimmed of all the bark (which was literally thrown in the trash), before being sent to the kitchen where it was sliced paper-thin into a tray and placed in an oven until it all turned gray. As a ticket holder at the event being catered, I also tried that version that paled in comparison to what I ate hot off the pit. Even the best cooks can’t always control what the meat looks like when it hits your plate.

The irony of this visit to Santa Maria was that good tri-tip, of which this style of barbecue is strongly identified with, was scarce. The Santa Maria area is a steak lover’s dream, but a few wisps of smokiness from the red oak fire isn’t going to quench any desire for a smoked brisket. If you’re in Santa Maria with a hankering for barbecue, you’re better off cooking a tri-tip, or maybe even a brisket, in the backyard. Go to one of these restaurants for great grilled steaks.

Check this previous post for more on California’s native barbecue style, how it developed, and how the Santa Maria Elks Lodge does it different than any restaurant.