Before the phrase “mesquite-grilled” became a common descriptor on hoity-toity menus of restaurants trying to prove their Texas bona fides, and before backyard cooks bought mesquite chips by the pound to add an “authentic smokehouse” flavor to their meat, the mesquite was a scraggly tree that people in the Southwest considered a nuisance. And while many ranchers and farmers in West Texas still curse the prolific and hardy tree, most people, instead of complaining, have made lemons into lemonade.

Our modern relationship to the beleaguered mesquite begins during the post-Civil War era, when much of South and West Texas became cattle grazing land. As livestock populations proliferated, the animals helped the seed-bearing mesquite pods spread, their languid movement across the land strengthening the tree roots, as explained in a 1982 Texas Monthly article:

As livestock munch on mesquite beans, they are apt to trample on some trees, especially younger ones, which triggers a survival response from the mesquite. On the underground portion of the main trunk are dormant buds that literally get jolted into life if the plant is shaken up. The disruption makes those buds send up more stems—one mesquite becomes a bigger, thicker mesquite.

This became a problem for ranchers. The tree’s deep and wide root system (which also makes it hard to eradicate) slurps up water in an already drought-stricken landscape, and grasses that protect against soil erosion wither away. As mesquite spreads, it also chokes off valuable acreage, and the pods, when consumed in large quantities, can be harmful to cattle. This confluence of irritations led many landowners in the area to dream of its demise.

In 1946, the Dallas Morning News reported on mesquite eradication tests being run in South Texas. A pesticide called “24-D Hormone Killer” was being spread by Dow Chemical “in the hope information obtained will lead eventually to elimination of mesquite.” At that point they estimated that 10 million acres of Texas was covered in mesquite. Just five years later, The Seminole Sentinel reported a more dire number. “[A]bout 65,000,000 acres of Texas range land are infested with mesquite and other varieties of noxious shrubs.” It seemed mere chemical warfare wouldn’t be enough.

As when any problem crops up, an enterprising entrepreneur saw opportunity. In this case, that was Albany resident J. D. Willett Jr., who started bagging up mesquite chunks in 1956 and selling them under the W W Ranch name. In a short story about a local chamber of commerce meeting, The Albany News wrote, “[Willett] reported that he and his associates have found that mesquite, using trees with the red centers, and having been dead at least five years, makes very excellent wood by barbecue.”

These guys weren’t exactly reinventing the wheel here. A 1913 ad in the Crosbyton Review alerted readers to the need for “3 to 5 cords of good mesquite wood to be used for the barbecue.” But the idea of selling the wood was novel. I suspect the notion of marketing mesquite as a desirable retail product sounded to local ranchers like what we all thought about bottled water twenty years ago. They probably couldn’t believe they were getting one over on the American consumer.

But they did, and mesquite’s reputation—and its association with Texas barbecue—got a big boost in the late fifties thanks to the Air Force. In 1957, the 433rd troop carrier wing, which was based at the now defunct Brooks Air Force Base in San Antonio, had a few weeks of training scheduled in Miami, and they decided to treat local city officials to some authentic Texas-style barbecue. The unusual catering method became fodder for news: “They flew in a steer and all the trimmings for the barbecue,” the Breckenridge American wrote, adding that, “Needing fire with which to cook the steer, they also flew in mesquite wood.”

Today, mesquite wood remains a popular fire fuel for barbecue. Chadd Green, who works at W.W. Wood, Inc., a wood-product company in Pleasanton that sells chips, chunks, and mini logs under the Western Premium BBQ Products, said it’s their second most popular product both in Texas and the rest of the country. (Hickory holds the top spot by a hair.) Green said mesquite is what the company was built on when founder Jerry Lawson started it in 1986. They chop and kiln-dry their wood before it gets bagged. Area ranchers might want to get to know them if they’re faced with a glut of unwanted mesquite. Green said they’re always happy to take drop-offs at their Pleasanton facility as long as you call ahead first. 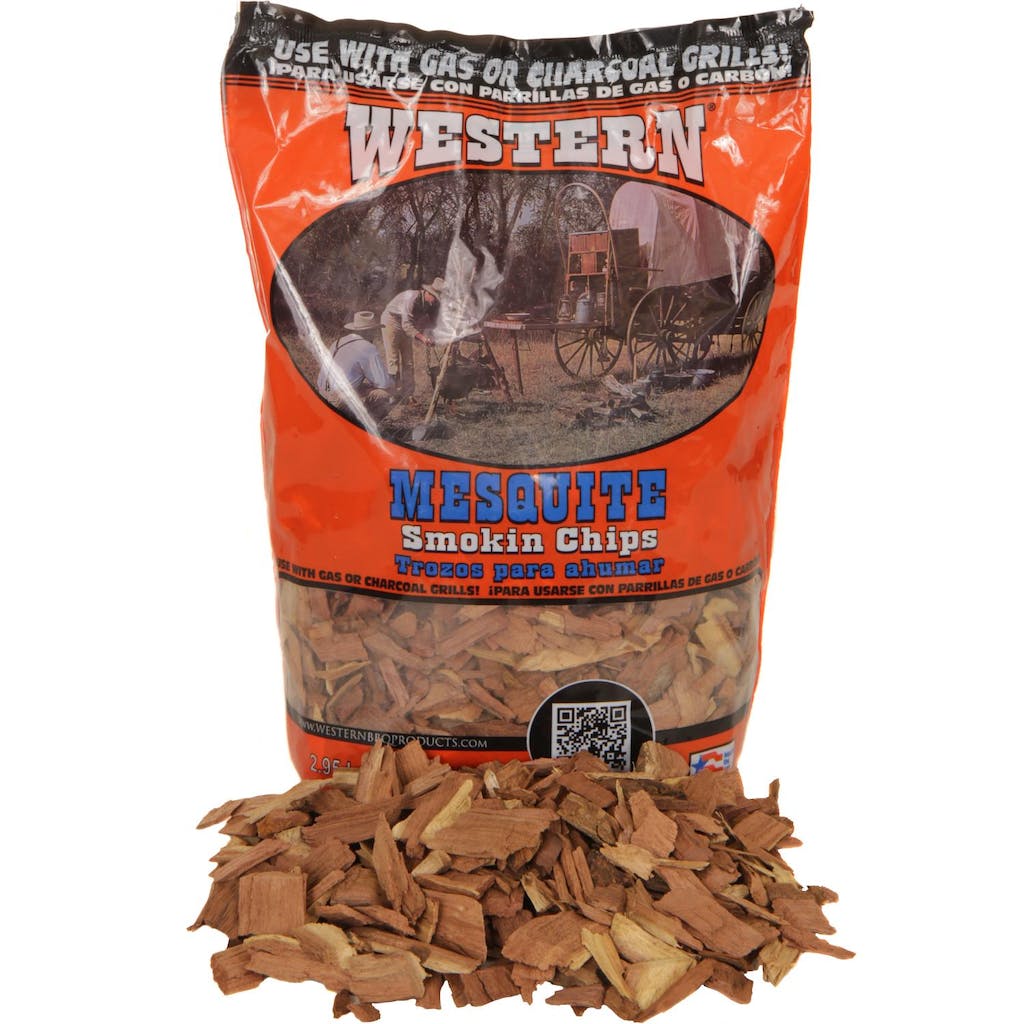 That kiln-drying process replicates the “seasoning” process practiced by many barbecue joints (although that usually lasts a year or more), but those five-pound bags of mini mesquite logs rarely makes it to a restaurant. (Western Premium BBQ Products are marketed mainly for retail.) Barbecue joints get their wood by the truckload, but with so much oak, hickory, and pecan in Texas smokers, how often is mesquite the choice?

When I went searching across the state for barbecue while researching The Prophets of Smoked Meat, I kept track of the wood being used. In the 200 barbecue joints I visited, mesquite was the most popular choice. That has a lot to do with the swath of Texas where mesquite is the only local hardwood option—basically everywhere south of San Antonio and west of San Angelo. Yet most of the famous barbecue joints, most of which are clustered in Central Texas, steer away from mesquite because many pitmasters are turned off by its strong smoke flavor.

That opinion is rooted in some science. Wood smoke flavors are developed from the combustion of lignin within the wood, and mesquite has a higher concentration of lignin than most hardwoods. In its chapter on smoked food, the book Modernist Cuisine ranked the common fuel sources for smoke from least to most intense, and mesquite was listed as the strongest. This makes it a great option for direct-fire cooking: coals made from mesquite wood last longer and burn hotter than other woods, and once you’ve got the coals to cook with, the harsh smoke is long gone. This is why places like Cooper’s Bar-B-Que in Mason, Cranky Frank’s in Fredericksburg, or Big Boy’s Bar-B-Q in Sweetwater all favor mesquite.

As for great barbecue smoked with mesquite, that’s harder to find. Too many times I’ve had my tongue numbed from creosote-covered barbecue care of a smoldering mesquite fire. It has to be burning to keep from depositing that dirty smoke, but it burns hot. Keeping a fire low-and-slow with mesquite that’s burning properly is a challenge, which is why joints like Valentina’s Tex-Mex BBQ in Austin, Opie’s BBQ in Spicewood, and Rio Grande Grill in Harlingen should be commended for their ability to manipulate the wood. As should Tyler’s Barbeque in Amarillo. Their pitmaster revealed his method on Twitter the other day, saying, “The trick is to let the wood burn into coals and smoke with clear smoke for 80% of the cook time.” Essentially, this means the key to smoking successfully with mesquite is to make sure you see a flame and not just smoke.

As for controlling the spread of mesquite growth on our lands, the battle still hasn’t been won despite the efforts of Dow and their Sendero product. But rather than poison it, cut it down and stack it up. You never know when you’ll need some for your next barbecue.