For forty years, Paul Burka has been a part of Texas Monthly. His retirement officially begins today, on Texas Independence Day. His legacy will live on in Texas Monthly’s list of the best and worst legislators, and his celebrated career has made an impact on Texas politics. But what few know is that before his career in journalism, Burka was a Texas barbecue lobbyist.

Paul Burka’s love affair with Texas barbecue began on October 8, 1966. Griffin Smith Jr. had convinced Burka to come along on a Saturday road trip to Lockhart. As Smith remembers, it was “a beautiful crisp clear day, and we discovered Kreuz’s.” The atmosphere and the barbecue made an impression. After finding some like-minded friends, Mary Sanger and John P. Hamilton, they formed the Texas Barbecue Appreciation Society (TBAS). Their 1970 letter to Texas mayors outlined their aim. “Our organization, the Texas Barbecue Appreciation Society, exists for one purpose: to promote the enjoyment of our state’s finest regional gourmet dish: good barbecue.” 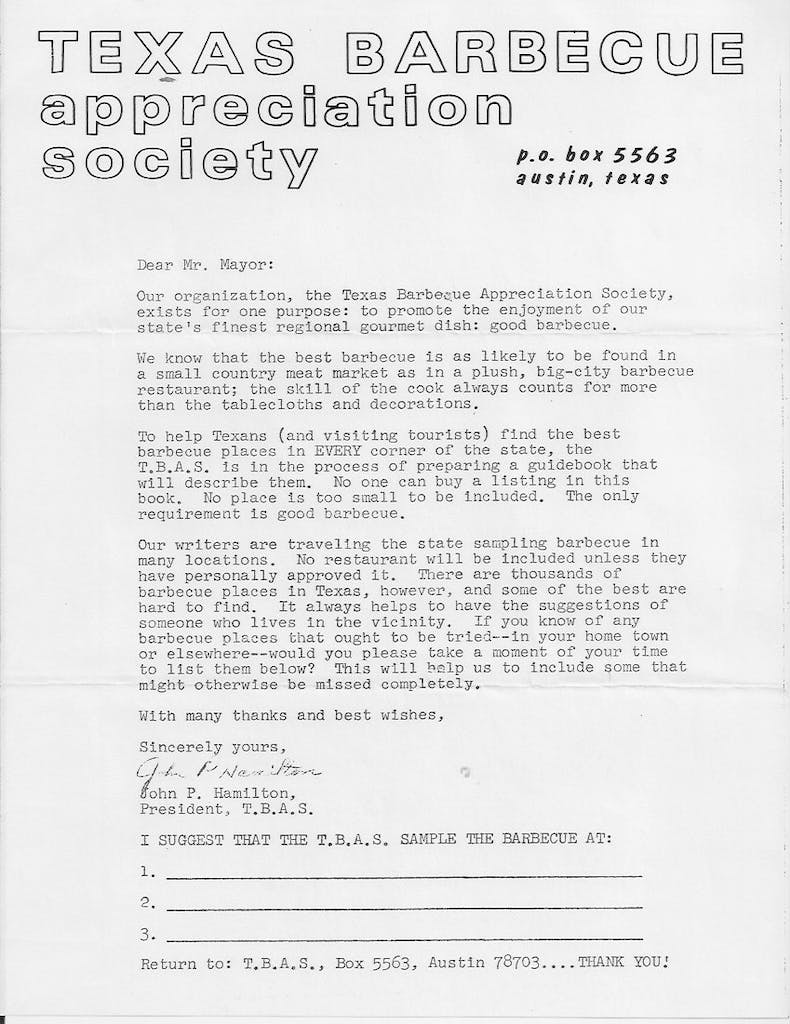 Burka was working as an aide in the Capitol and noted that “all the lobby groups send out questionnaires.” The group followed suit and typed up a humorous questionnaire of their own. They asked each candidate for their support on four items. “Our society supports creation of a three-man Texas State Board of Barbecue Examiners.” This team would assess the quality of barbecue at joints across the state and determine if they could use the word “barbecue” to describe their food. There would of course be a grace period “to allow time for compliance, upgrading of recipes, improving meat quality, and the like.” 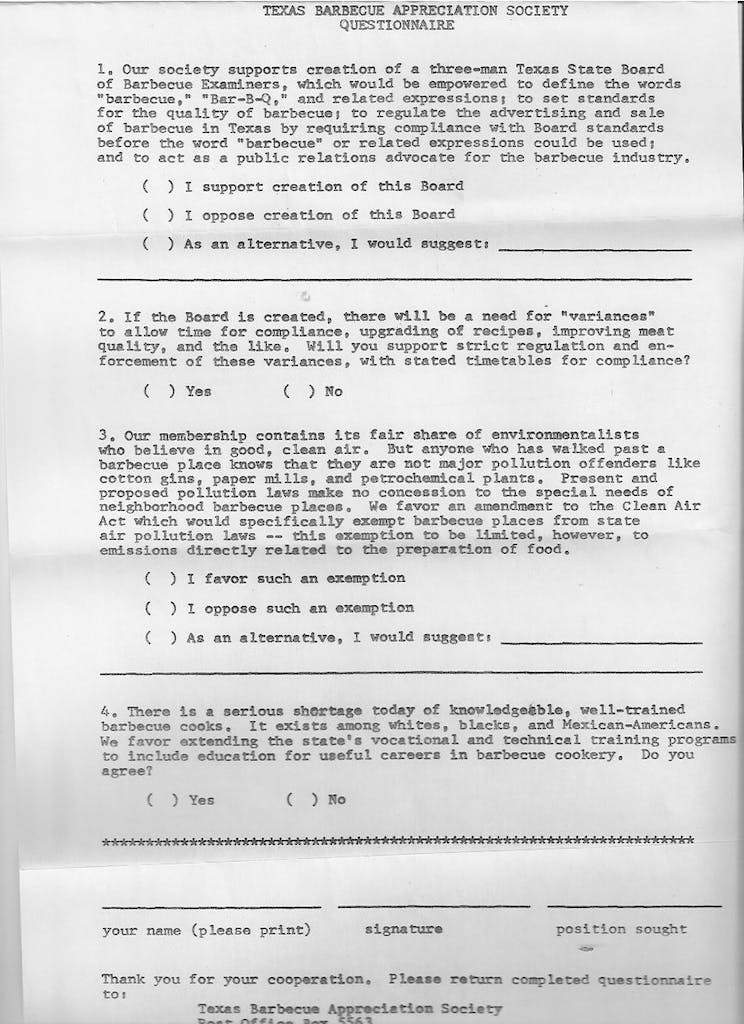 Then TBAS got more specific with pleas for barbecue joints to be exempted from the Clean Air Act, and for the state to support a barbecue training program. “We favor extending the state’s vocational and technical training programs to include education for useful careers in barbecue cookery.” Although I’d support that final one, let’s remind ourselves that the whole endeavor was a bit tongue-in-cheek. Griffin Smith Jr. noted that the questionnaire “was actually, as you can imagine, a joke…This was a parody of the kind of questionnaires that statewide candidates got” from other special interest groups.

Despite the humorous nature of the questions, they did receive a few responses. “We got in some answers” said Burka, but many were more along the lines of “What is this crap?” Griffin Smith Jr. remembered one more specifically that came unsigned from El Paso “that said in big letters ‘This is bulls—!’ It was intended to be fun, but some people took it seriously.” 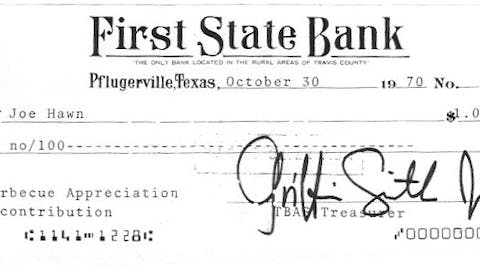 Seven candidates took it seriously enough to gain an official endorsement from the TBAS. The endorsement came along with a check for $1.00 and a letter suggesting a use for the generous donation. “We hope that you will choose to spend it on a barbecue dinner at your election night Victory Party.” And in closing “Barbecue fans all across Texas are counting on you.” 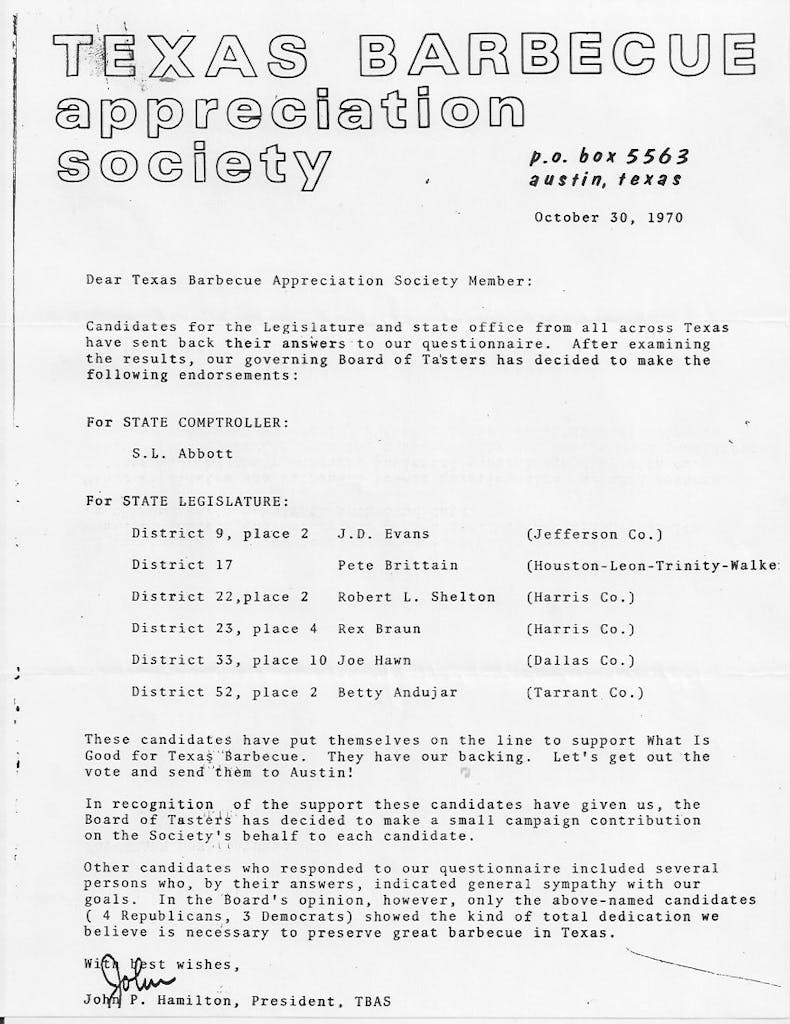 The TBAS folded after about a year, but might have continued if they hadn’t lost their P.O. Box, as Griffin Smith Jr. recalls. “I came in one day late, and they said ‘Sorry. It’s already been rented to somebody else.’” Three years later, Smith penned the first barbecue cover story in Texas Monthly, and Burka came onto the staff the following year. The legacies that they created from there are still alive in the magazine, and maybe we have a vigilant postmaster to thank for it.