Today marks the first Jerky Heap challenge. We’ll taste one jerky at a time and see if it’s better than the current leader or not. If it’s better then it gets top billing and remains on the top of the Jerky Heap. 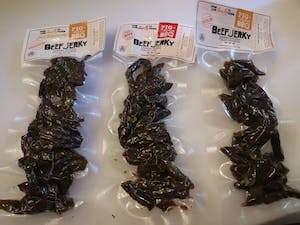 Pig of the Month BBQ (POTM) sent me this sampling of their jerky to try. There are three flavors – original, hot, and mild. I tried them all with an esteemed panel, all of whom are fans of dried meat products. The first thing we notice about this jerky was the note about eating the jerky  within three days of breaching the vacuum packing. Jerky is meat that is dried so that it can last for long periods of time without refrigeration, so this was confusing. It made more sense when there were no nitrates in the ingredient list, which is the most common preservative used in commercial jerky. 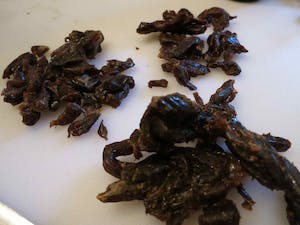 The texture was soft and moist. If you know Robertson’s jerky and it’s dog treat like toughness, this stuff is at the other end of the spectrum. The POTM jerky had good initial flavor, and the Hot did have some good heat. We couldn’t tell much difference between the Original and the Mild, but all three flavors had an odd texture after a few chews. It seemed to disintegrate in your mouth, kinda like a cheese puff. This reminded me of the term “diminishing caloric density” as discussed in the book Salt, Sugar, Fat. This is when a food seems to disappear on your tongue, so your brain doesn’t realize how much you’re consuming. No wonder we finished all three packages. As I stared at the ingredient list yet again, I saw the reason for it being over-tender. They had used a natural meat tenderizer called papain. This is effective, but it also continues to tenderize even after the meat is packaged. Now it all made sense.

We liked the POTM jerky just fine, but it has some issues. At this point we have just one jerky on the heap, so The Pig of The Month is on top of the Jerky Heap.