Texas-style barbecue seems to be taking over the world, and that doesn’t just mean you can find smoked brisket on the menu in Seattle and New York. There’s an aesthetic to presentation that has permeated these places deeper than post-oak smoke has seeped into Louie Mueller’s walls. Places across the country are plating (if you can call it that) their sliced, smoked meat on pink butcher paper-lined trays.

A few years back, if you saw a pile of beef on butcher paper, chances are that it came from Lockhart or Luling. This dates back to the old days, when Kreuz Market and Black’s BBQ, in Lockhart, and City Market, in Luling, operated primarily as meat markets. People typically were ordering to-go, and the butcher paper, already used for raw meat, doubled as wrapping for the cooked stuff. At Louie Mueller Barbecue, in Taylor, which still wraps-go orders in white butcher paper, trays started being used for in-house dining back in 1959, according to Wayne Mueller.

Call it meat market paper, peach paper, or just butcher paper, it now appears to be a tray adornment meant to be a sort of symbol for the “authentic” barbecue.

In 2006 Barry Sorkin and a team of barbecue aficionados opened Smoque in Chicago. They broke the mold for what a barbecue joint in Chicago was expected to serve. They served ribs (to be expected in the Windy City), but they also sold hot links made by Tim Mikeska in Taylor, Texas, and the centerpiece of their menu was Texas-style brisket. But what would they serve it on? “We talked about pizza pans, but the round shape was a waste of space on the table,” Sorkin remembers. That’s when he started searching for a sturdy rectangular tray. “They had half-sheet trays, so I figured they had quarter-sheet trays too. I had a hard time finding them. We had to special order them, but now it seems ubiquitous. You can go to Restaurant Depot and get them.”

Sorkin didn’t realize he’d created the new standard for serving barbecue. But he was using white freezer paper, not the pink butcher paper. That came later, and it was centered around the Austin scene. After the raging success of Franklin Barbecue, everyone went in search of their secret. Was it the smoker? A secret ingredient in the seasoning? Maybe it was the pink butcher paper that he wrapped his briskets in. Backyard pitmasters, and probably a few competitors, began calling Aaron Franklin asking where to buy that paper. His paper supplier even became the subject of barbecue message boards. Currently Franklin is using paper from Oren International which advertises that its pink butcher paper “is most often used in the Bar-B-Que scene as a basket/tray liner.” I asked Aaron Franklin how he settled on using it. “It’s standard stuff for Central Texas. I don’t know what else you would use.”

Mark Jones is the vice president of sales at Oren International, and he couldn’t be happier about the recent surge in popularity for his company’s pink butcher paper. They’ve manufactured it for about a decade, but it wasn’t until about a year ago that he noticed a trend. “Orders are up, and popularity is growing,” Jones told me. Did he attribute the newfound demand to barbecue? “Oh, yeah.” He fields about a dozen calls per week asking how to purchase single rolls of his product, but you’ve got to go through a distributor for that. Alamo Food Equipment & Supplies, outside of San Antonio, sells a 1,000-foot-long-by-eighteen-inches-wide roll for about $20. The paper has gotten so popular that an Austin reseller is charging more than double that.

Now pink butcher paper is the norm in Austin. A tray from la Barbecue is hard to tell apart from one a mile away at Kerlin BBQ. 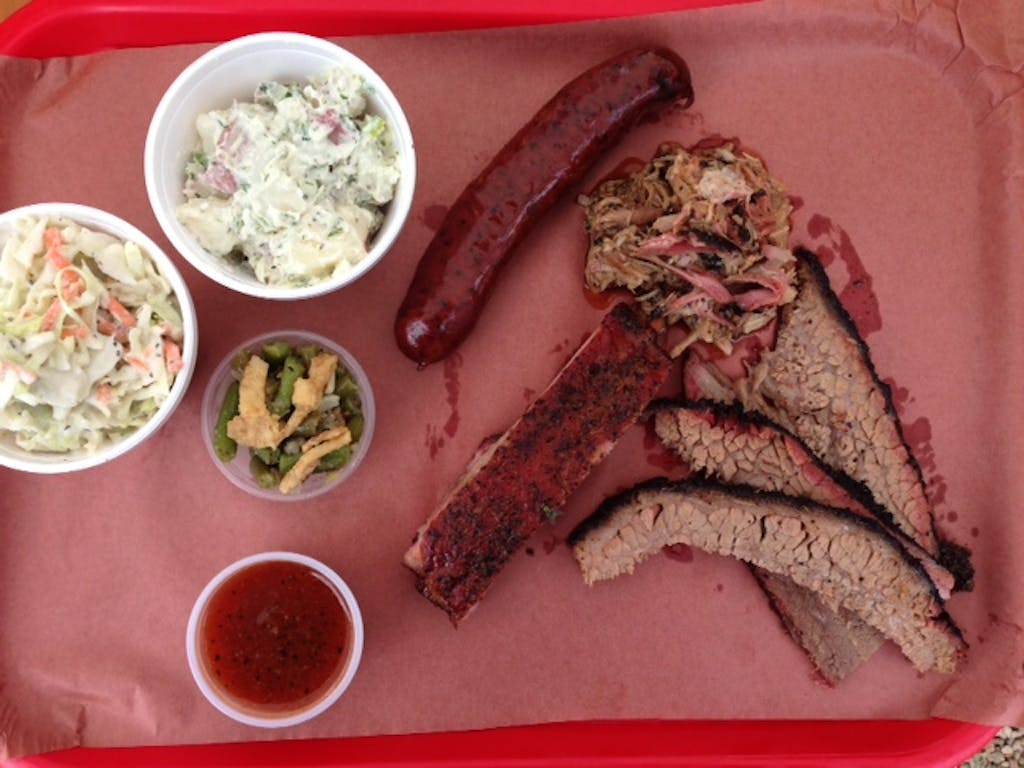 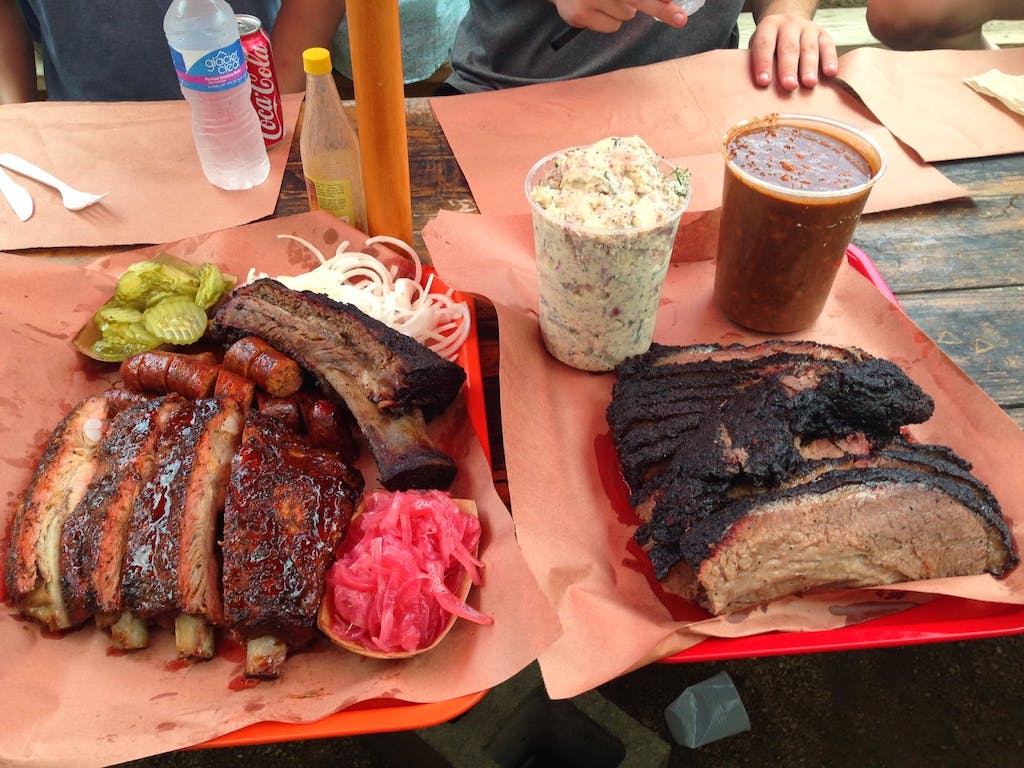 Around the rest of the country, a butcher paper liner is almost a requirement if Texas-style barbecue is being served. Labels have been added below, but without them it might be hard to tell if these barbecue trays came from Texas or Boston. 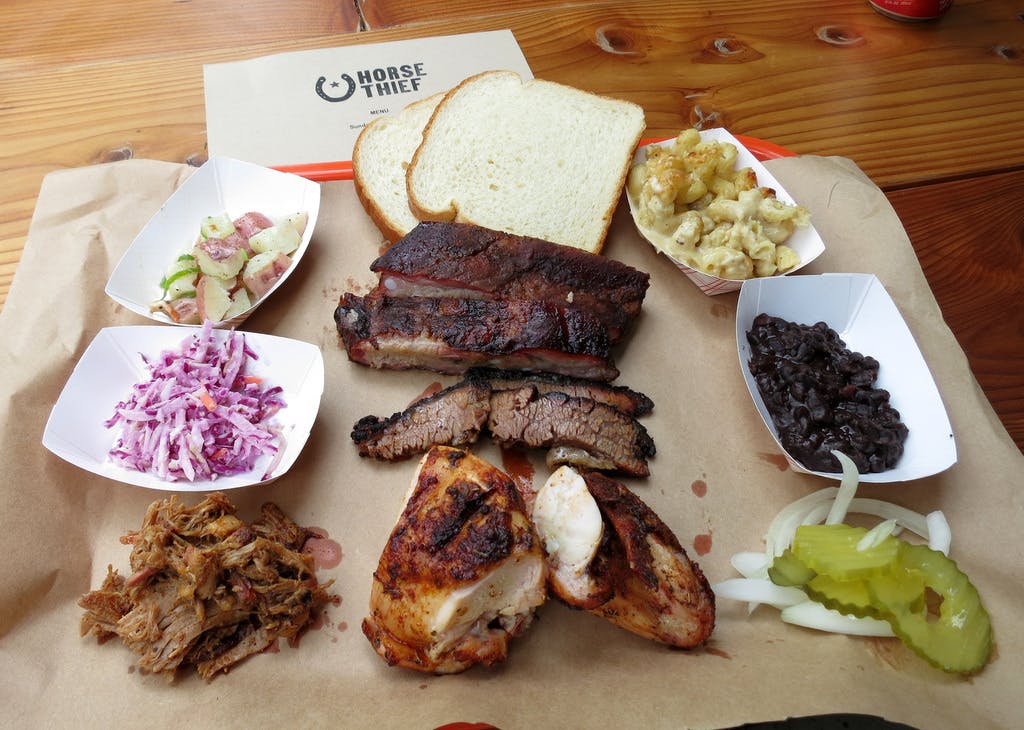 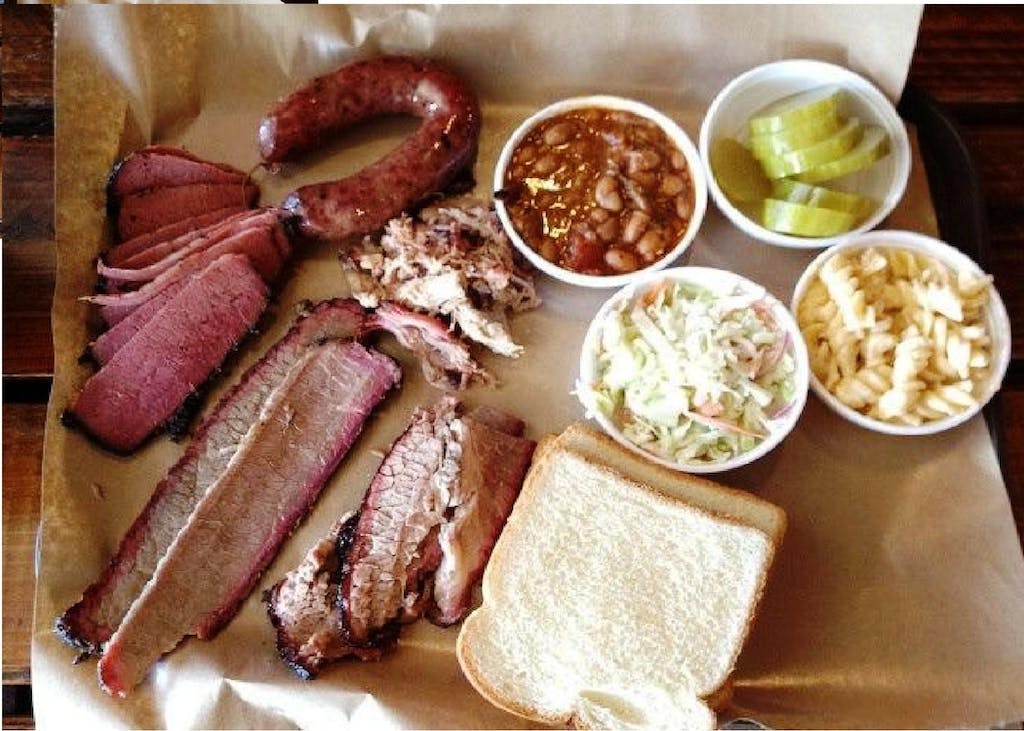 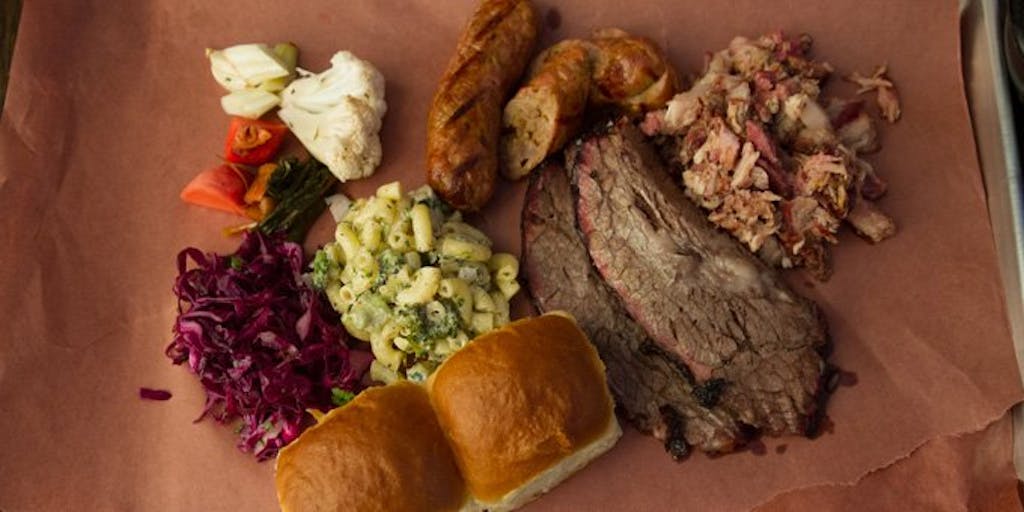 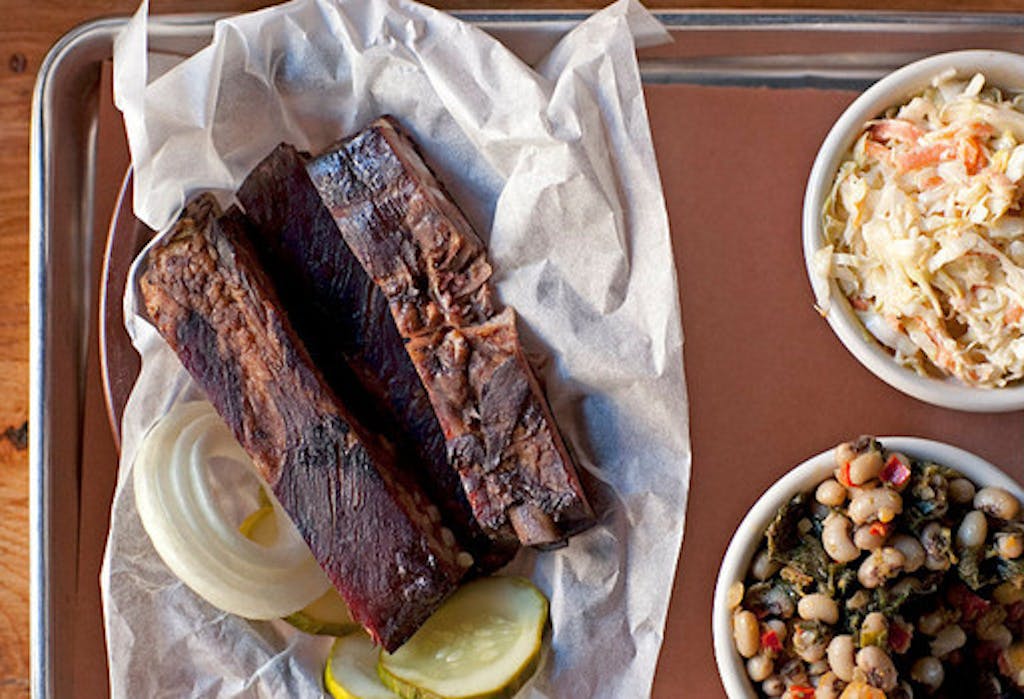 Percy Street Barbecue in Philadelphia, Pennsylvania. Photo from the Examiner 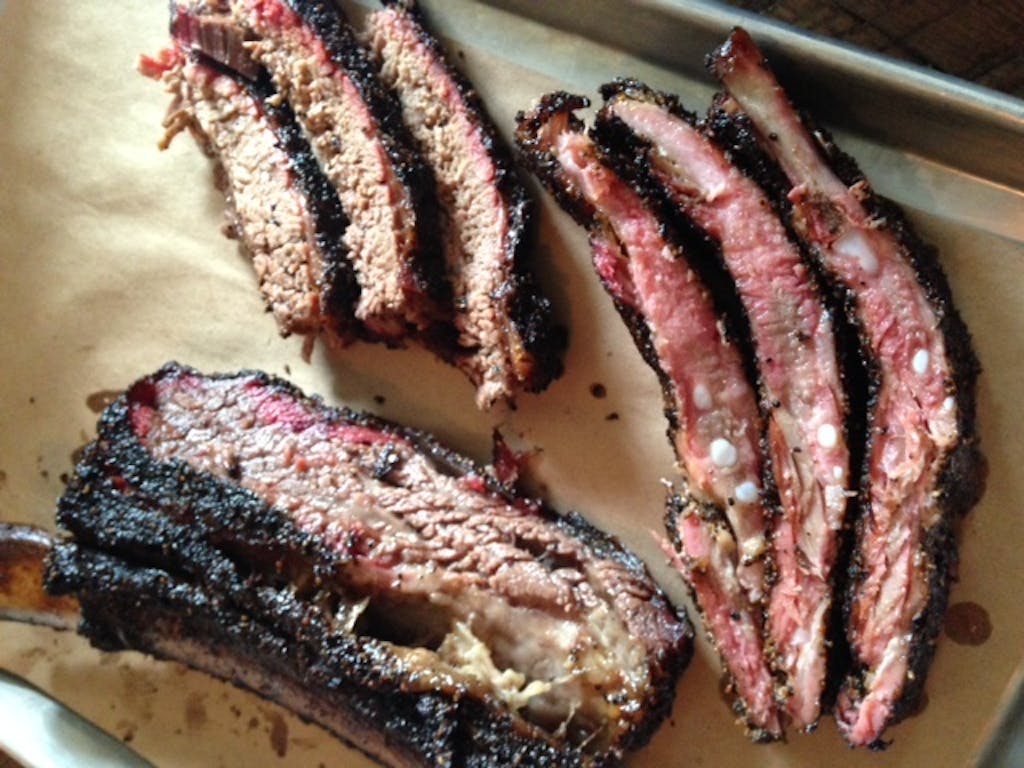 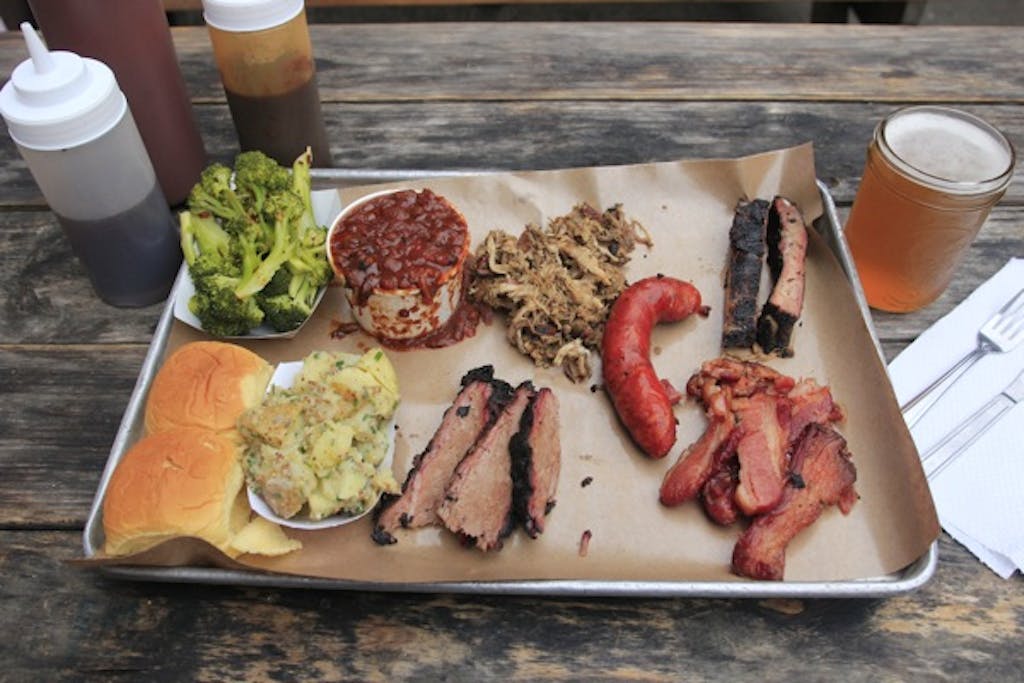 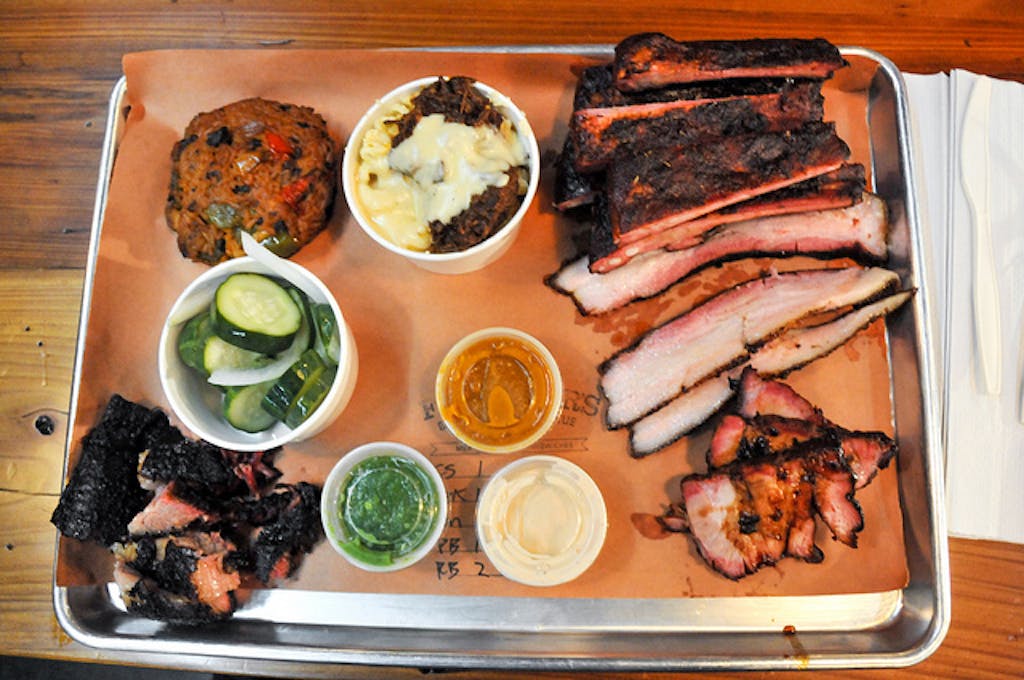 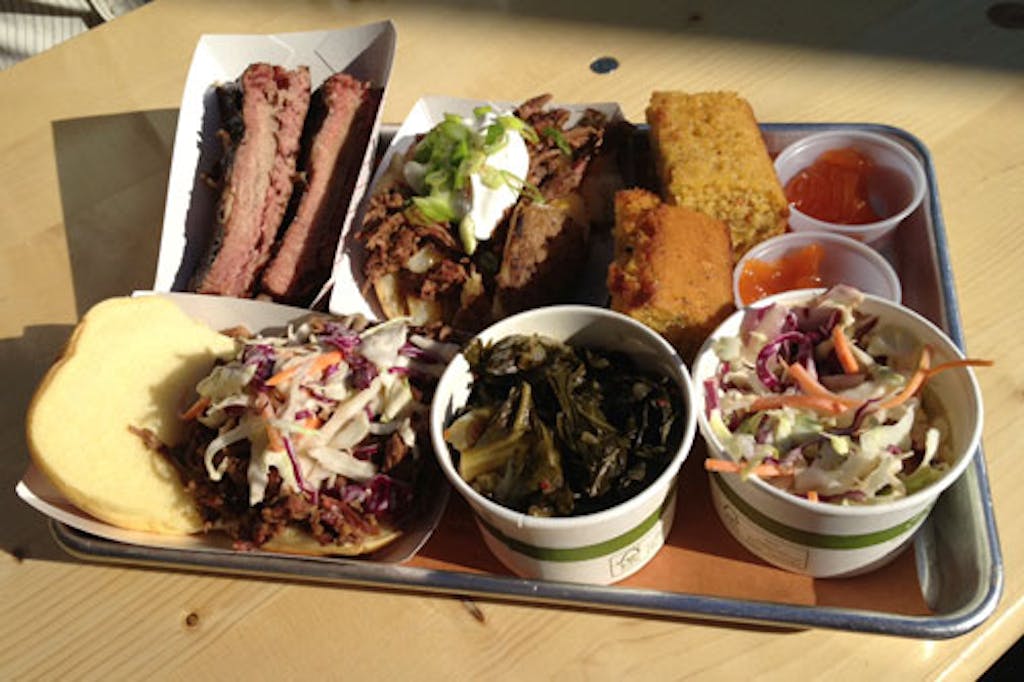 Morgan’s BBQ in Brooklyn, New York. Photo from The World’s Best Ever 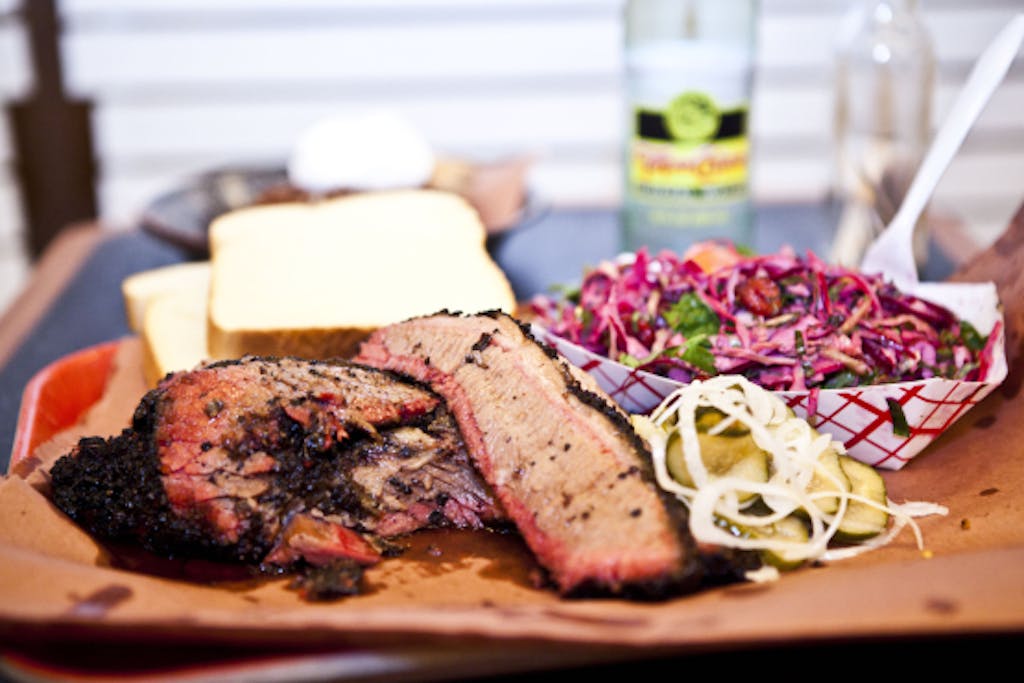 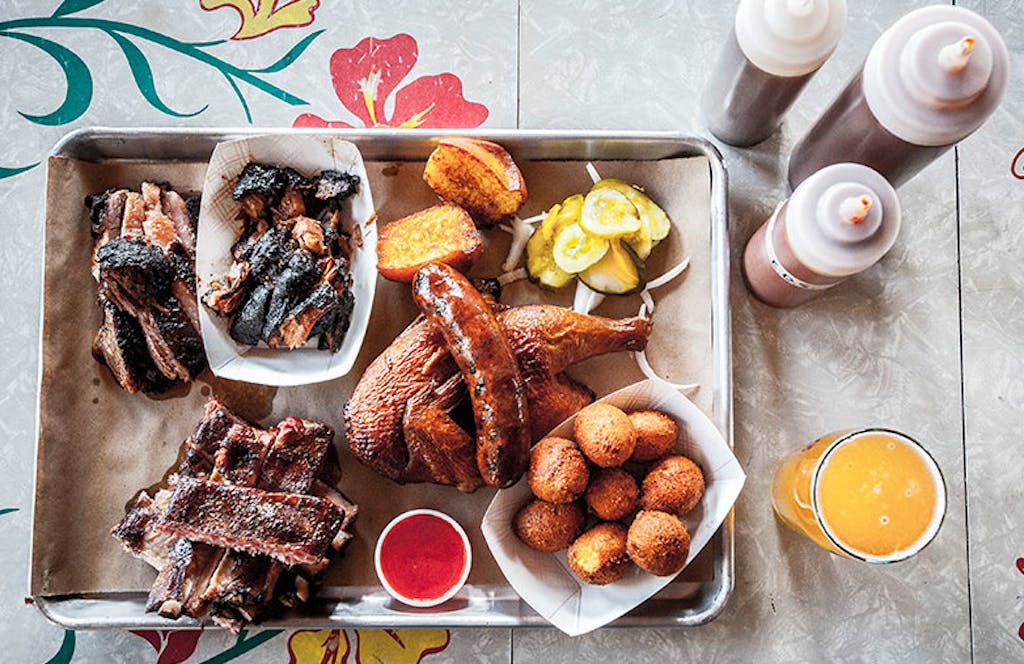 Salvage BBQ in Portland, Maine. Photo from the restaurant’s website 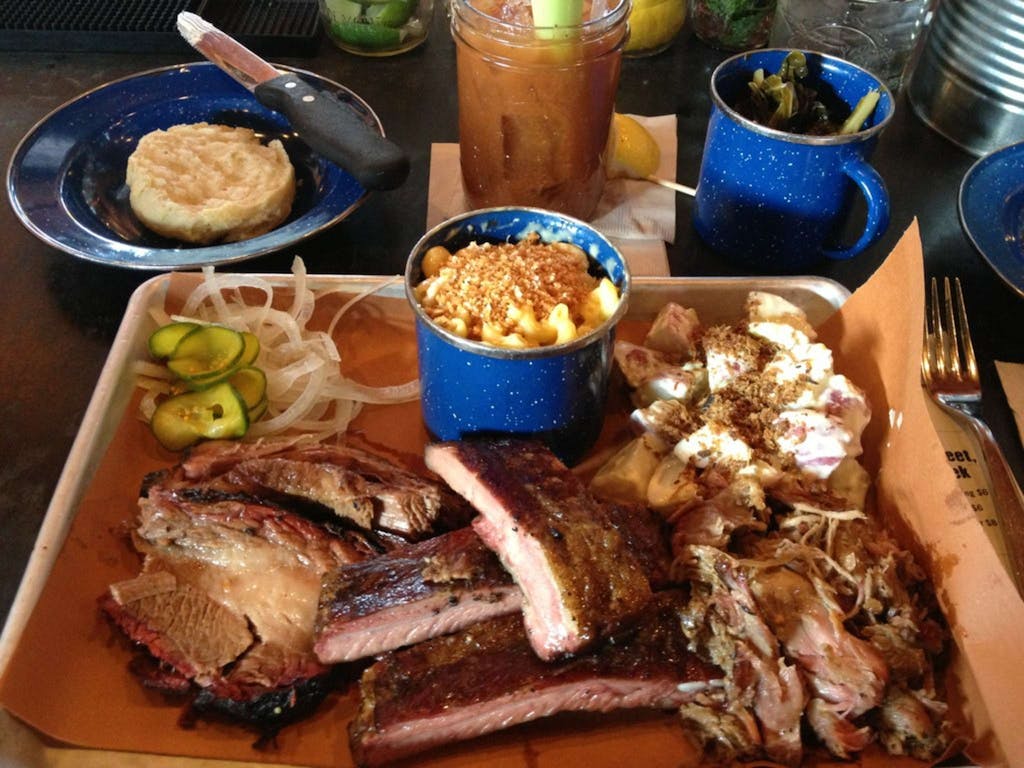 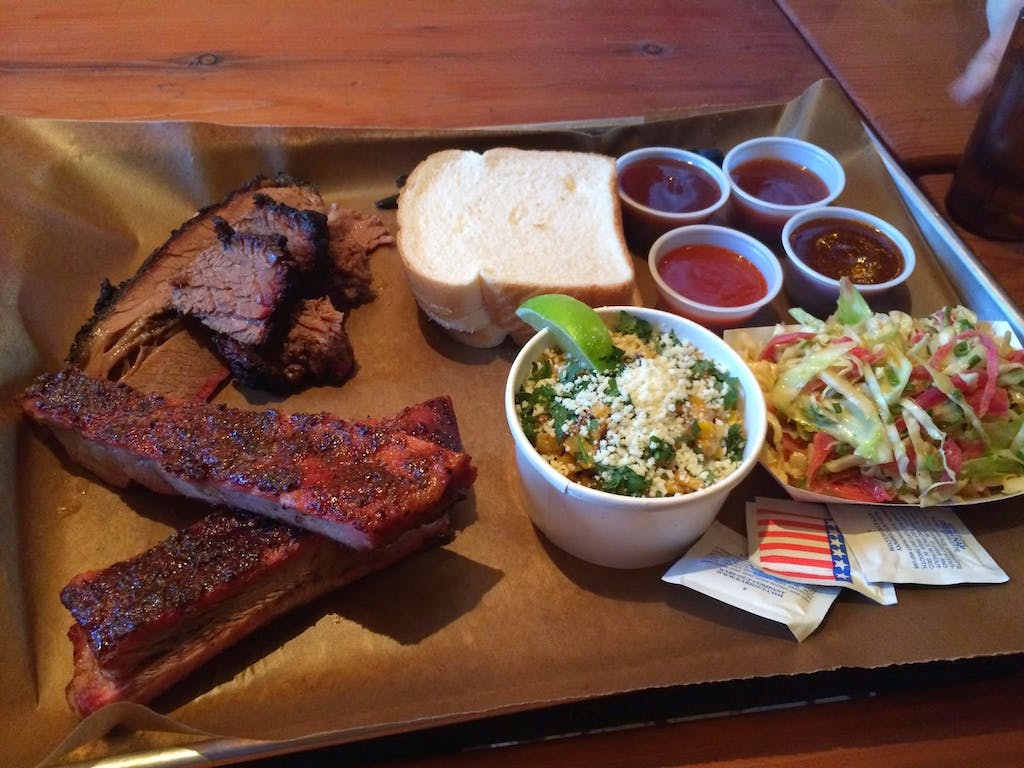 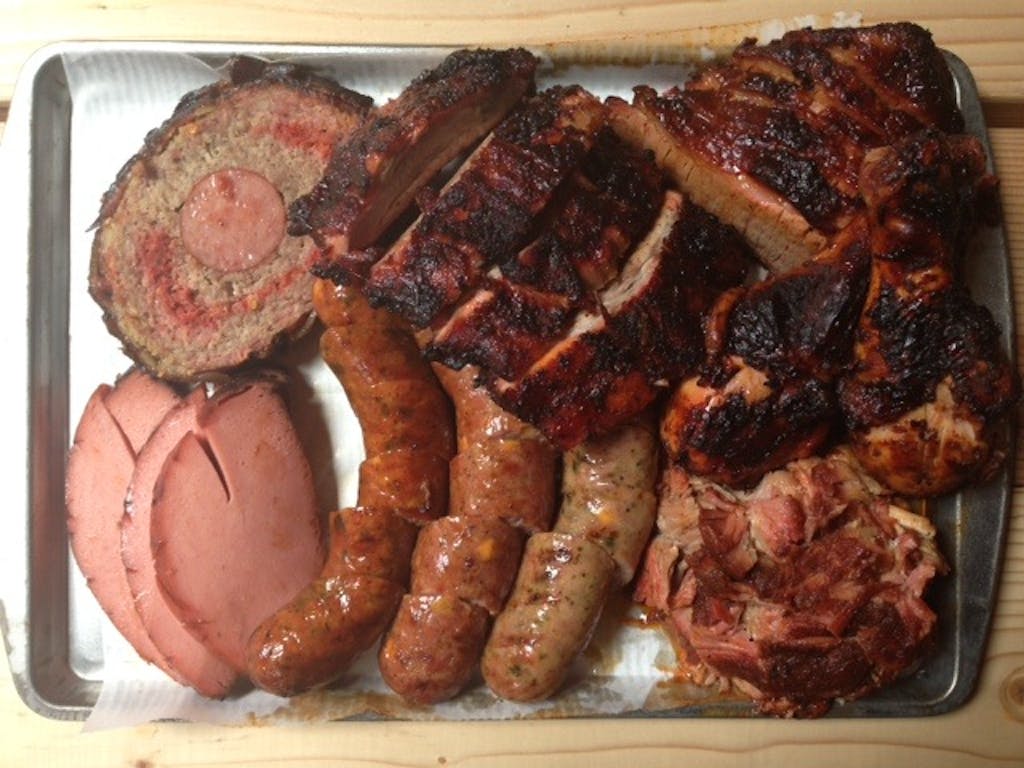 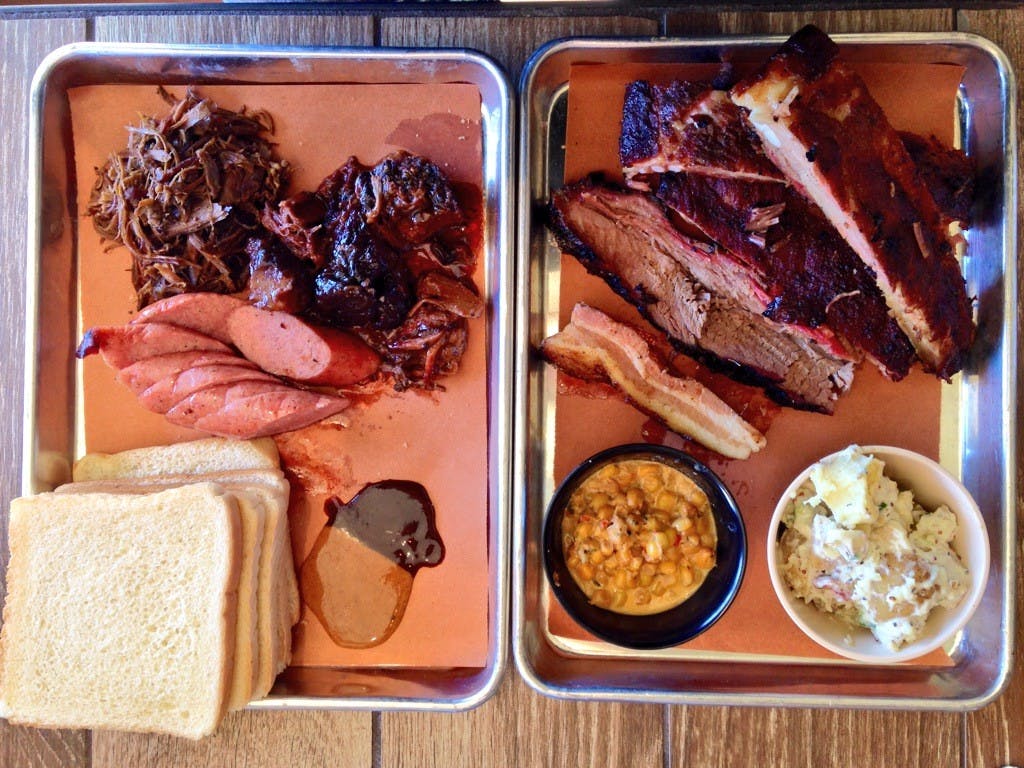 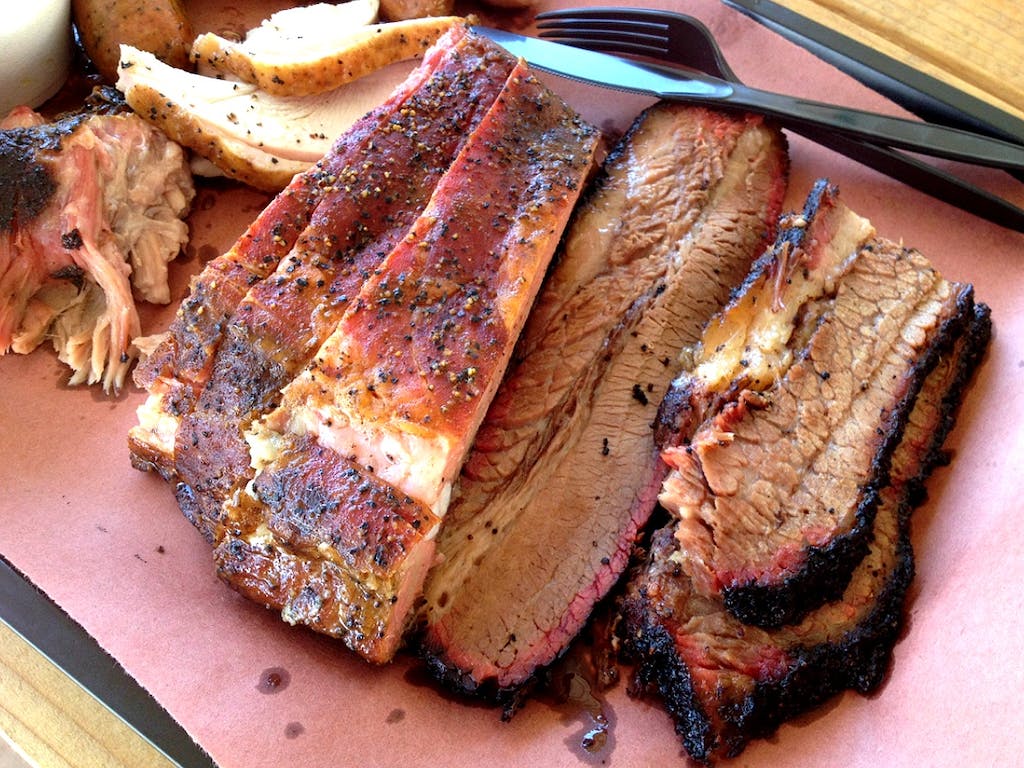 A friend of mine in Seattle is opening a barbecue joint called Jack’s BBQ later this month. I called him to see if this new look of barbecue has affected how he plans to serve his barbecue. He’s going to use butcher paper, but hasn’t settled on which trays to go with. I mentioned quarter sheet pans, and I could almost sense his eyes lighting up on the other end of the phone. “I might have to look into those!”