The Texas Book Festival comes to Austin this weekend, and this year there’s a new food option – or three. Texas Monthly has partnered with three barbecue joints and a taco truck to create the TMBBQ ‘Cue Court. From 10-5 on Saturday and 11-5 on Sunday, you can come by the corner of Congress Ave. and 9th Street in downtown Austin to try some incredible barbecue. Here’s the line-up:

– Miller’s BBQ (Belton) and Peached Tortilla (Austin) are pairing up to create some menu items featuring incredible barbecue from Miller’s with the ingenuity of a taco truck. They’ve have a pulled pork bowl with Japanese pickles, asian napa slaw and cilantro lime rice along with:

– The Blue Ox BBQ (Austin) trailer will represent Austin barbecue. They’ll be there with their full barbecue menu which includes:

– Jason Dady will bring his crew from Two Bros. BBQ Market (San Antonio). In addition to their cherry glazed baby back ribs, you’ll also be able to get Brisket Fritos Pie and The Jefe Sammich with Smoked Chicken Thigh, Potato Salad, Slaw & Shiner Black Sauce. They’re fresh off a Reserve Grand Champion prize at Smoke @ ICC, and the final menu is inspired by their brisket entry at the competition: Tamarind Glazed Smoked Brisket with Spicy Peanuts and Thai Herbs.

Check here for more information about the ‘Cue Court. We hope to see you there. 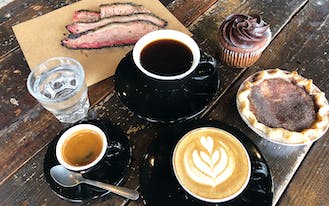 Breakfast Will Soon Be Brewing at Miller’s Smokehouse