Driving on State Highway 16 through Central Texas, passing picturesque pecan forests that double as cow pastures, you’ll eventually come across two barbecue joints next door to one another in San Saba. For a quick stop, Gage BBQ offers the convenience of a drive-thru and tender, sweet ribs. The relative upstart, Youngs Burritos & BBQ, provides an impressive array of mesquite-smoked meats, homemade sides, and even Iranian ice cream for dessert.

“I’m not putting my name on a box of anything,” Lisa Young, the family and business’s matriarch tells me. The recipe for the sides are all hers, like the excellent mustard-based potato salad with plenty of eggs and pickles, which is mostly mashed and includes lots of seasoning.

The thick steel smokers poke out the front of the building, allowing the exhausts to run outside. These pits are the reason the Youngs settled here, right next to a competitor. They moved the business from Richland Springs, fifteen miles west, into San Saba when it was just a few months old in 2015. “We couldn’t find another place,” Lisa said, and this building was already set up for barbecue. Plus, the relocation kept the building in the family. Vaughn’s Texas 16 BBQ, the previous tenant, belonged to Ronnie Vaughn, the grandpa of Lisa’s niece. Vaughn’s Texas 16 BBQ closed more than a decade ago, and the Youngs have given it new life.

Lisa’s husband, Carl, runs the pits along with their sons Jeremy and Colten. The smokers are stubby and don’t have a separate firebox, and a mesquite fire is just built to one side of the cooking chamber. Carl said he smokes the briskets for about ten or twelve hours before putting them in deep pans that are then covered with foil. “The pans act like a pressure cooker,” Carl told me in the pit room. They continue to cook throughout the day until they’re needed for service. At eleven in the morning, they were already very tender—but don’t expect to pick up an intact slice by dinner time.

The method holds in plenty of moisture, so the briskets weren’t dried out. But building in a resting period would be an improvement. When I stopped through, they come straight off the pit and were too hot to touch with bare hands. I liked the flavor, though, of the simple rub. The smokiness of the mesquite was the dominant flavor, right on the edge of too much, but just tame enough to enjoy.

Tender spare ribs had a bit more going on in the rub, and the smokiness was more subtle. The same goes for the pulled pork, which was was great wrapped inside a warm, homemade flour tortilla (remember, burritos is also in the name) that came on the side of the barbecue tray. There’s also plenty of toppings like fresh, chopped jalapeños, pico de gallo, shredded cheese, and the tomato-based barbecue sauce. The tortillas are big enough to  handle a good chunk of the barbecue menu all at once.

There’s an original sausage and a jalapeño version. Neither are made in house, but they are warmed in a unique way. Since they’re already smoked, they grill them for service. It makes for a juicy link with a little extra flavor from direct-heat cooking.

The family’s talents don’t stop after the main course. Decadent bread pudding was hot from the oven the morning of my visit. Better yet was a duo of homemade ice creams. A sweet cream version was like a cool glass of sweet milk on a hot day. Bastani, an Iranian recipe, was far more complex. The scent of rose water was strong, and there’s some saffron in there too. A few pistachios gave it some crunch. I’d never tried Iranian ice cream before, and I certainly didn’t expect to be introduced to it at a barbecue joint in San Saba.

The Youngs’ creativity with dessert reflects the overarching theme of their joint: they’re not chasing current barbecue trends. They cook in a fashion that’s unique to their situation, and remain true to the locally available mesquite. It might not all be perfect, but their barbecue reflects their place in Texas. You can get Austin-style barbecue in Austin, so it’s nice to find barbecue in San Saba that tastes like the Hill Country. 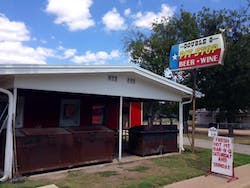