Q: First, I have to admit that I am not from Texas (big sigh) though I have been there before and I do love the Lone Star State. The thing is, I have friends here in Arizona who don’t love and respect Texas as much as I do and yet they frequently use the word “howdy.” I don’t like that they use “howdy,” because it seems more of a Texas thing than an Arizona thing. You know, like how it’s Texas A&M’s official greeting and all. What do you think about this, Mr. Texanist?

A: Thank ya much for this here alert, ma’am or mister. The Texanist sure does ‘preciate it. If there’s one thing that rankles his rear like a burr ‘neath a saddle blanket it’s sidewinding Arizonans casually appropriating one of the most widely used words in the Texas vernacular. Upon reading your letter, the Texanist was, at first, hotter than a hornet caught in the crown of a felt cowboy hat on an especially warm day. He was, in fact, just fixin’ to raise up a posse to help him deliver a wagonful of canned whup-ass out Arizona way when it suddenly struck him, like a pecan fallin’ on the noggin, that imitation, as the ol’ proverb goes, is the sincerest form of flattery.

Plus, truth be told (and after giving his Texas tongue such a workout in the preceding paragraph, the Texanist is too tuckered out to do anything but tell the truth), while most all Texans do indeed say “howdy”—or sometimes the even Texan-ier “hidy”— the word is not solely the possession of Texas or Texans. According to etymologists, the roots of “howdy” can be found across the pond, in 16th century England, where it was common for gentlefolk in that time and place to greet fellow countrymen by asking after each other’s health with a simple “How do ye do?” Sometimes, it was shortened to “How do ye” or even “How d’ye.” The response would have addressed the question at hand directly: “Oh, me back’s ailing a bit and I’ve suffered a bout of St. Vitus’s Dance of late, but other than that there’s not much to report. Thanks for asking. How do ye?”

Fast forward a few centuries, to the southern United States, where “How do ye” and its related forms had been condensed to, you guessed it, “Howdy,” a simple “hello”-like greeting and not the more formal enquiry it once was. And as Southerners spread westward, they brought the greeting with them to a number of places, including Texas, where it really took hold.

Nowadays, “howdy” is firmly planted in the Texas lexicon, or, if you will, the Texicon, right up there at the top of a long list that includes “fixin’,” “tump,” “y’all,” and “yahoo,” among many others. “Howdy” is indeed the official greeting at Texas A&M University, although nobody knows the origins of the tradition. The word is also the focus of countless postcards, coffee mugs, t-shirts, and all sorts of other Texas-branded gewgaw. Texas Monthly itself used to hawk “Howdy” t-shirts in its classifieds section (“Order yours today: talkin’ Texan never goes out of fashion. Only $6.50.”) The Texanist is going to speak to the marketing department about a reboot of those smart tees. Also, googling “Texas” and “howdy” will result in a whopping six million more results than will googling “Arizona” and “howdy.” But all you really need to know to appreciate how ensconced “howdy” has become in the Texas argot is that it’s the first word to come out of the mouth of Big Tex each year at the State Fair of Texas— “Howdy, folks. This is Big Tex. Welcome to the State Fair of Texas.” On top of all that, the Texanist, who is fluent in Texan, would venture a guess that, depending on his schedule, he uses the word “howdy” many dozens of times a day. “Howdy” is definitely, as you have suggested, a Texas thing a whole lot more than it is an Arizona thing.

The way that Texans talk—those drawls and twangs and that unique vocabulary—are among our most identifying characteristics. The Texanist, responding to query about the Texan accent, once compared a good Texas brogue to the plumage of a peacock—always colorful, but especially impressive when in a full-strut display. For instance, when the Texanist travels outside of Texas he will sometimes turn his own accent up a bit, as if it were a nametag announcing, in big, bold letters, “Howdy, my name is the Texanist. I’m from Texas. Buy me a drink.” without having to actually say it.

Talkin’ Texan can be fun to do, so it doesn’t surprise the Texanist the least bit that non-Texans occasionally give it a try. On its face, the fact that your friends say “howdy” is not at all offensive. Were the Texanist to ever be greeted with a “howdy” by an Arizonan, he might raise an eyebrow, but he wouldn’t see it as a reason to raise his dukes. He’d probably just reciprocate with a smile, a tip of the hat, and a “howdy” of his own. Unless, that is, he sensed that the simulation was meant in a mocking and unflattering way. If imitation is the sincerest form of flattery, then it follows that mockery would be the sincerest form of belittlement. And Texans don’t tolerate belittlement very well.

Considering your stated admiration for Texas—which, by the way, is very much appreciated—and acknowledging your concern for our welfare, the Texanist does hereby deputize you an official member of the Arizona Chapter of the Posse for the Protection of Texan Talk, equipped with multiple cans of whup-ass and, should you see fit, full authorization to open them up.

On behalf of all Texans, the Texanist thanks ya kindly. 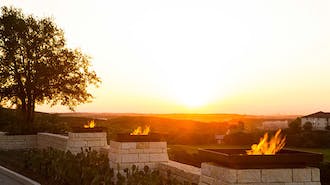 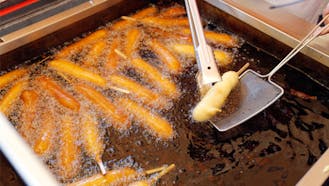 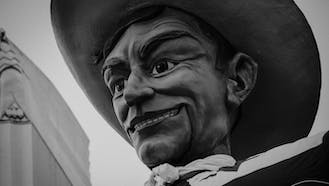 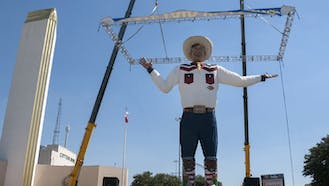 A Visual History Of Big Tex