Prior to every House committee meeting, chairmen admonish the audience that only credentialed media are allowed to video or record the committee, but the public also is reassured that an official recording of the meeting is being made. But if it hadn’t been for some members of the public violating the rules at the House Transportation Committee meeting Thursday night to video record the confrontation, only the vaguest descriptions of the allegations and recriminations would be available.

The video was “locked up” because it had become part of an investigation into a violation of House rules, according to House General Investigating Chairman John Kuemple.

But removing the video from public view also meant it looked like a conspiracy by the House leadership to keep the truth from coming out. Stickland’s supporters were quick to shower him with blessings on Facebook.

“This little bit of juvenile payback by Tyrant Pickett effectively reveals who they are really afraid of: YOU and the liberty-lovin’ Texans that you speak for!” wrote one.

Another wrote: “The “party” is mothballing your legislation for daring to stand on principle. That you for standing up for those who made the journey to Austin for not.” I think he meant naught.

You get the drift.

The conflagration between Pickett and Stickland started earlier in the day as a mere spark when Stickland used a parliamentary maneuver to knock a Pickett bill off the calendar to give Federal Reserve Bank security guards arrest power. Pickett, according to The Austin American-Statesman, gave Stickland a copy of the bill with two stick figures drawn on it to look like a policeman, labeled Fed Reserv Good Guy, and a robber, labeled Bad Guy.

(Just in case you are new to the world of conspiracies, the Federal Reserve Bank supposedly is quasi-private institution run by Wall Street bankers and foreign interests determined to financially enslave Americans. Entire books have been written about the conspiracy and debunking the conspiracy. Just know Stickland’s supporters on Facebook cheered at his assault on Pickett’s bill: “We need to stop Bill to Give Arrest Powers to Federal Reserve Guards.”)

As day faded into night Thursday, Stickland prepared for a hearing in Pickett’s committee on his HB 142 to ban red light cameras. From the House floor, Stickland posted onto Facebook a photo of three women in his office working on papers. One was one her knees on the floor. Stickland wrote, “I am still on the floor fighting the liberals. Grassroots champions are back in my office preparing to testify on HB 142 to ban red light cameras in the State of Texas.”

That was about the time Representative Gary Elkins, who has been fighting against red light cameras since 2003, noticed something unusual. There was a difference between the number of people signed up to testify on his bill and the number for Stickland’s bill, even though they were almost identical pieces of legislation.

“We had about 16 people who registered for my bill positive and about 33 negative,” Elkins told me. “Then my chief of staff contacted me and said, ‘Something’s weird because about 50-something people are for Stickland’s bill and your bill is almost identical, so why wouldn’t they be for both bills, because it was the same 33 people who opposed both bills?”

Elkins told me he had no idea how Pickett found out that some of Stickland’s registered witnesses were not even in Austin.

Sometime around 9 p.m., Pickett called Stickland forward to lay out his bill.

“I was sitting there,” Elkins said. “Stickland got called before my bill. Stickland got up and then the chairman said, ‘Wait a minute.’ Then he started making a phone call. I was like, ‘What is going on?’ He called the people and he confirmed that the people did not register for the bill, which is a violation of our rules.”

Pickett announced he would leave Stickland’s bill pending, but invited any witnesses actually present for it to testify on Elkins HB 1131.

Pickett: You just heard someone who claims to have registered here…

Stickland: What do I have to do with that? You know I was on the floor all day with you.

Stickland: What are you trying to prove here?

Pickett: I’m not having to prove anything. The proof is there. House Bill 142 is pending. Please, leave the committee room or be removed.

Stickland: I hope you have the gall to apologize to the people who have spent their time and money supporting this bill.

Stickland turned and left with a sergeant in a gray suit. A woman’s voice on the recording can be heard to sigh and say, “Got it.”

Canon contacted the House audio-video staff earlier today trying to get the official video posted online. After she was turned down, she posted a Facebook comment that read: “If they alter one mili-second of last night’s exchange between chairman Pickett and Rep Jonathan Stickland, there will be hell to pay. And I’ll be raising a BIG sh*t storm over this!! (oh, it’s also highly illegal to tamper with a video recording of a committee hearing, or any meeting of official status.) WE WILL BE WATCHING.”

Of course, filling out false witness affirmation forms also could be a violation of the law for tampering with a government document. At the moment, though, the case is under review by the House General Investigating & Ethics Committee as a violation of House rules.

“There will be an investigation looking into the alleged violations of House rules regarding witness registration,” said committee Chairman John Kuempel, R-Seguin. “Our rulebook, it clearly states you have to fill it out yourself at the Capitol.”

The investigation at first will be conducted behind closed doors, Kuempel said.

Stickland and Pickett declined to discuss the incident with me.

Elkins told me that banning red light cameras has passed the House almost every session, only to die in the Senate. Recently, a red light ban in SB 714 by Senator Bob Hall won Senate approval and was sent to the House. The legislative council lists its companion as Stickland’s bill, not Elkins. Elkins said he still has hope for his red light ban to move forward. In the meantime, he got a ring-side seat for one of the best shows of the 84th Regular Session of the Legislature.

“In my 21 years, I’ve never seen anything like it,” Elkins said. 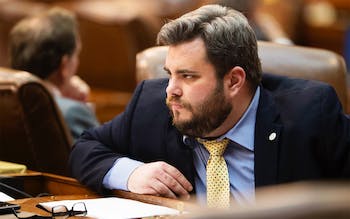 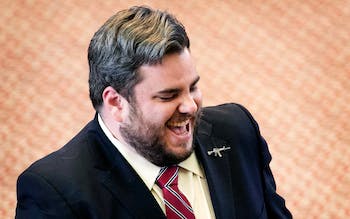 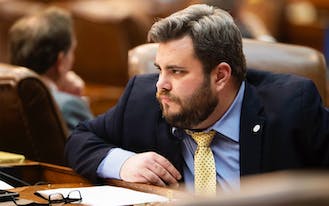 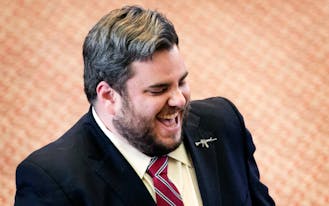 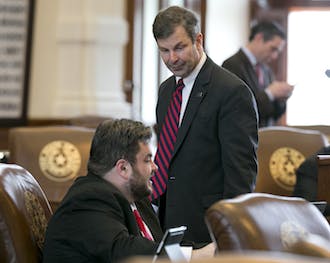 A Tale of Two Libertarians