After school, we would sometimes stop by a small white shack on Closner Street, the main drag in Edinburg. I’d walk up to the dark window, feeling the breeze from the air conditioner unit inside. Standing there in my stiff blue plaid pinafore, a hand would reach out between the black burglar bars, and take the coins from my hand. Once the grinding noises coming from within the shack ceased, the hand would appear again, this time holding a Styrofoam cup filled with shaved ice, drenched in tart, imitation peach syrup, and garnished with a plastic spoon. I can still taste the metallic vanilla flavor of fake peach, still feel the cold flakes melt on my lips. I really loved snow cones on those hot, end-of-school days in late May, somewhere in the seventies.

Raspa or snow cone stands are still scattered throughout South Texas, predictably in parking lots of grocery stores or Laundromats. Always scouting, I love committing to memory their location. Like a video game avatar, I mentally give myself points for every location I capture. (There’s one, frrrrrinnngg!)

You have your choice of standard issue purple grape, red cherry, and blue coconut (a former alternate favorite of mine), but South Texas snow cone stands have a dizzying array of fantasy flavors unseen anywhere else. All fruit flavors including pineapple, mango, papaya, tamarind, and lychee can be upgraded into a cream flavor with the addition of condensed milk. Chamoy, a salted dried green peach of Chinese origin, is a huge flavor favorite (they taste like battery acid, but with a kick).

One of my new favorite snow cones is a Diablito, or A Little Devil. The combination varies according to who prepares it, but generally speaking, they are made of tamarind syrup, a copious drenching of freshly squeezed lime juice, and a thick top coating of Sal Lucas (see sidebar). Usually, I eat only half, as after about five minutes I can feel my esophagus eroding.

Last night I had a chamoyrindo, which is a combination of chamoy and tamarind. I had never heard of those before. Like a barista at a coffeehouse, the snow cone guy is an artist, combining salty and sweet, artificial with natural, acido sour with salt and blazing hot chile over shaved ice. Word gets around as to which raspa stand has the best flavor combinations, the most generous syrup pours, and the longest menu.

Raspa stands can sometimes also be a full blown snack stand, but there again, the selection is highly regional. Hot Cheetos are absolutely de riguer, sometimes served with liquid cheese poured into the bag, like Frito Pies. Popcorn, chips, candy, Corn Nuts, and nachos are regular fare too. Selections of any protein (like hot dogs or hamburgers) are rare, as that is expensive, volatile inventory.

Fruit cups can be a major component of a snack or raspa stand. Cut up wedges of cucumber, jícama, watermelon, cantaloupe, or pineapple shoved into tall clear plastic cups, doused with fresh lime juice, chile powder, or a powdered acido preparation are very popular.

Big dill pickles are always in stock. In addition to selling pickles, a Pic-a Dilly is a snow cone that has no fruit syrup, but is topped with pickle vinegar, loads of lemon juice, some chopped pickles or pickle relish, and variable combinations of salt, chile, or citric acid. Pic-a Dillys are for hard-core acido fans, the ones my orthodontist targets with grim warning signage.

Roasted corn in a cup is another biggie in the snack stand scene, and personally, I am a huge fan. In the fall, there is usually a corn roaster outside of my hometown grocery store. You can smell the burning charcoal when you go inside. The entire shopping session, I am thinking about how I want my corn: Mayonnaise, grated Parmesan cheese, chile powder, lime juice, margarine, salt, with the kernels either freshly cut from the cob and served in a cup, or au natural, on the cob, with the attached burnt husks twisted into a convenient handle for clean handed gnawing convenience. I usually get my corn in a cup, so I can eat it on the way home. Corn on the cob makes for dangerous driving. By the way, thanks for the cup holder, Chevy. My kids in the back seat thank you too.

Ah, but I digress. We were talking about raspas.

A raspa stand is always a 10- by 10-foot square hut. Clapped together out of plywood or cast-off paneling, they are usually painted blinding tropical colors and are invariably lit with irritating fluorescent lights. The colorful syrup bottles with pour spouts are proudly lined up for the choosing, with the flavors listed on a large, sometimes bilingual placard outside.

Hawaiian shave ice intrigues me. I hear the Hawaiians put sweetened Japanese adzuki beans in the bottom of the cone and then fill it with shaved ice and the flavored syrup of your choice. Beans in our local Tex-Mex culinary dialect have a different perception, so I doubt an upgrade of con frijoles would ever cross over into our raspa world. But what do I know? I would have never thought a Pic-a Dilly would sell . . .

My husband talks about the yukis that he enjoyed during his childhood in Reynosa (across the border from McAllen). Vendors with rolling carts would stroll the plazas with enormous canvas covered blocks of ice. When a paying customer arrived, the block of ice was uncovered, and the ice shaving would commence via a rectangular hollow metal shaver. Once the shaver was full, the ice was transferred to a conical mold. A wooden stick was inserted, and then the ice was compacted around the stick, in the mold. Once inverted, you had an ice cone on a stick, which was then bathed in a thick flavored syrup of your choice. A yuki is the way snow cones are made when there is no electricity, still the case in many parts of Latin America.

The customer lines can get pretty long after school or dinner. Families can always be found in the evenings gathered at the raspa stand, loitering at the picnic tables, chatting and making the most of the occasional breeze from the passing traffic. Cops, kids, moms in chanclas, blue collar dads, barefoot babies in diapers, ’tweens in soccer uniforms all head to the raspa stand when the day has been too hot, too long, and lacking in any significant pleasure. The moment of the first bite, when all the snowy ice is crisp and sweet in your mouth and you hear the wind softly applauding the palm trees overhead, is a moment of nostalgia that you can buy every day for under $2.

Everyone loves a raspa. 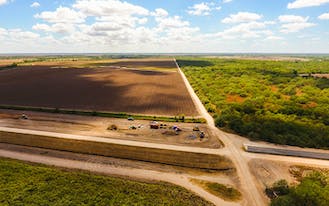 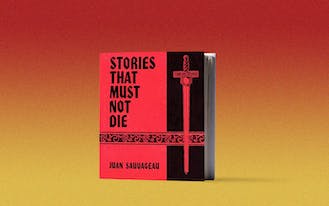 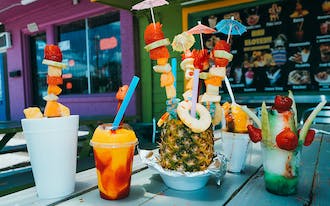