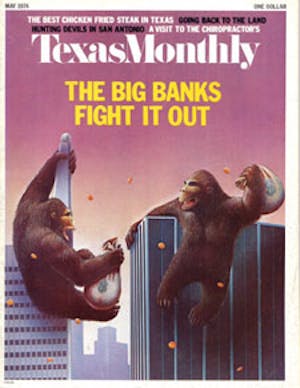 Like other converts to a new faith, John B. Connally has become rabidly dogmatic in professing allegiance to the Republican party. Since the first of the year, the Reverend John has been taking his crusade around the country to demonstrate to the good Republicans of the United States how magnificently he can preach their gospel.

It was never more apparent than recently when he addressed the party faithful in northwest Ohio’s fifth congressional district, always a bastion of Republican strength. Why the eight-term congressman, Delbert L. Latta, is even a member of both the house rules and judiciary committees, and that’s something that isn’t done very often. They are very secure Republicans, born and bred that way, and would never give a thought to voting for anyone from that other party. They are the bedrock of the Republican party, small businessmen, bankers, young attorneys, family people—the kind who will deliver their votes to Connally when and if he is nominated for president. This district is known around the country for its party support. In the last three years these Republicans have heard Spiro Agnew, Gerald Ford, and Earl Butz at their annual dinner.

This year 1800 of them plunked down $5.50 for an evening in Bowling Green, Ohio. It was the largest Lincoln Day crowd in the fifth district since a non-candidate named Richard Nixon spoke there in 1967.

Right now, they aren’t too concerned yet about 1976 presidential politics since uppermost in their minds is the defeat of a Democratic governor and a US senator. But they did listen to Connally and they liked him, although in a quiet way.

They stood for a sincere ovation when he walked to the head table, then stood for him when he was introduced to speak, and they stood and applauded when he finished. But it wasn’t applause or adoration one would expect of Republicans frantically in search of a leader. It was firm, but polite, support of Texas John.

Connally was seldom interrupted during the speech as he explained his “conversion” to their party and enthusiastically defended Nixon’s actions on the economy and Viet Nam, which they enjoyed hearing. Connally told them he switched parties because he felt that the future of the country, individual opportunity, fiscal responsibility, and preservation of the free enterprise system lay in the well-being of the Republican party.

Little bits of Southern Baptist evangelism began to surface as he spoke. He knew when to raise his voice and when to speak softly. The audience was never restless, but listened to his words because they are thinking about 1976 even though they aren’t working on it yet. Connally preached about the virtues of America and the Republican party, and, when it was over, you could have substituted God and Jesus Christ in place of country and party and had a sermon worthy of any Southern revival.

Connally also spoke about the United States’ future in international affairs. He said we are no longer at the apex of power and must wrestle in the future with the emerging economic power of Western Europe, China, the Soviet Union, the Arab countries and the developing nations, such as Brazil. Ohio Republicans were impressed. Although there was little interrupting applause, there were a lot of nods as Connally prophesied about the future. Afterwards, a rotund, cigar-chomping elderly gentleman who was a county chairman for Nixon in 1972 said he would like to be Connally’s county chairman in 1976. One woman, also impressed, told her husband that she could read about the speech in the paper the next morning and “it just wouldn’t have the same impact.”

I had to think that low-keyed speakers such as Howard Baker, Ronald Reagan, and Charles Percy could not have made a similar impression on Ohio’s staunchest party faithful. Connally was good and, Lord, did he ever look well. Handsome and trim, he must have had some sauna treatments as he made those umpteen Lincoln Day dinners of roast beef and meatloaf. He never said “uh,” spoke forcefully, and talked the language those Republicans wanted to hear. He complimented the past and present office-holders in the crowd, and did everything that any other non-candidate would have done. But Connally tried a little harder and did it a little better than the life-long Republicans would have. In, short, he demonstrated to them that he has accepted their faith, and he aims to keep it.