The men whom Andrés Manuel López Obrador bested in Sunday’s Mexican presidential election—and not only those three—ride in big, black, bulletproof Town Cars. To ward off kidnappers, they often travel in convoys with one black sedan in front and one behind, each carrying two heavily armed security guards. After all, isn’t Mexico a dangerous place for people these days?

López Obrador, or AMLO, as he is usually called, famously drives a compact white Nissan. He’s usually alone, behind the steering wheel. This year, as from 2000 to 2005, when he was mayor of Mexico City, and as during his prior presidential campaigns, in 2006 and 2012, he has eschewed bodyguards. Despite obscure beginnings and years of setbacks, he lives a truly charmed, if also ascetic, life. And that may be at the heart of his appeal to Mexican voters, who gave him a landslide victory in national elections on Sunday.

Mexico’s new president-elect was born in 1953 to a family of mom-and-pop merchants in small-town Tabasco, on the Yucatan peninsula. In those days, Mexico was a repressive one-party state. Its Partido Revolucionario Institucional, or PRI, was rhetorically, and sometimes in practice, nationalist, even if it was thoroughly corrupt as well. During his youth, López Obrador apparently imbibed its principles, such as they were. “The Process of the Formation of the Nation-State in Mexico, 1824-1867,” his 1987 bachelor’s thesis at the Universidad Nacional Autónomo de México, argued that “Mexico was the first Latin American country to suffer the aggressive policy of the United States. … The greed of the nation to the north initially centered on the province of Texas.” Most Texans would wince at words like that. Even most leftists outside of Mexico date “American imperialism”—what others would call “the American sphere on influence”—to a later date, the 1898 Spanish-American war.

Despite its professed nationalism, the PRI was unpopular in universities when AMLO was in his student years. Mexican collegians, like those elsewhere, were enthralled to fantasies of socialist change. A man who is now a close aide to the president-elect told me that when they were fellow students, López Obrador once tried to recruit him to the PRI.

“I was a member of the Communist Party, and I told him so,” he said.

“What was his response?” I asked.

That anyone might propose an alliance between the PRI and the Mexican Communist Party was not unreasonable because the Communists usually endorsed the PRI’s presidential candidates. But the idea soon bordered on the absurd. In 1968, at the order of PRI-ista Luis Echeverría, who would become president four years later, Mexico’s government gunned down some four hundred leftist demonstrators in what became known as the massacre at Tlatelolco.

A decade of armed, socialist attempts to overthrow the government ensued, followed by the rise of a dozen leftist parties whose electoral challenges ended in dismal failure until 1988, when Cuauhtémoc Cárdenas, the son of the PRI’s only beloved president, General Lázaro Cárdenas, founded a new party with a name too long to remember: the Partido del Frente Cardenista de Reconstrucción Nacional. People called it the “Ferrocarril,” or train, for short. Had the votes been honestly tallied, most observers believe, the younger Cárdenas would have become president instead of Carlos Salinas, a PRI privatizer and darling of the American press.

AMLO left the PRI for the Cardenista campaign and, at least formally, never went back. In subsequent years the Ferrocarril morphed into the Partido de la Revolución Democrática, or PRD, under whose banner AMLO waged his 2006 and 2012 presidential campaigns. But in 2014, when the PRD supported a partial privatization of its petroleum industry and an overhaul of standards for teachers in public schools, he struck out on his own. National ownership of Mexico’s oil was nearly sacred on the left, and teachers (who largely fell into the socialist and leftist categories) were desperate for leadership. AMLO gathered his allies into what he named the Movimiento de Regeneración Nacional, or MORENA—a word that also means “dark-skinned.” Its delegates will apparently now command a majority in the Mexican congress.

Yet Mexicans “on the left” are not yet sure of López Obrador’s loyalties, or even his nationalism. They view him as better than a lesser-evil candidate, but not really a comrade. True, as mayor of Mexico City, he christened pensions for the elderly and single mothers. But instead of extending the metro system, his administration built inner-city freeways that chiefly benefited the 20 percent of Mexicans who then owned cars. When AMLO joined telecommunications billionaire Carlos Slim in a project to restore and revive the capital’s downtown, today known as The Central Historical District, some on the left also said that he was gentrifying for the sake of hoteliers.

This year, in attempts to build a big tent, AMLO embraced Monterrey funds manager and agri-businessman Alfonso Romo, whom he had previously denounced as corrupt. He also took into his inner circle Manuel Bartlett, the PRI-ista who had  said that “atmospheric conditions” required him to suspend the vote count in the national election of 1988. Further perplexing for his activist base, AMLO accepted an electoral alliance between MORENA and the Partido de Encuentro Social, a party of evangelical Christians who are opposed to both abortion and gay marriage.

Previously known for his gravitas, AMLO put on a tranquil and lighthearted face this year. He grinningly deflected questions and accusations in three televised electoral debates, saying words to the effect of “You guys are assailing me because you’re desperate. I’m leading in the polls and everybody knows I’m going to win.”

While his opponents called for stiffer police and military measures to combat the nation’s drug cartels, he said that the problem of drug trafficking had to be attacked at its root: widespread poverty. He pledged to call a meeting that included Pope Francis, to sift through ideas for combating violence, including amnesty for some involved in the trade—which was immediately denounced until aides clarified that the amnesty would entail poor farmers who grow such crops as marijuana and laborers who help in its manufacture. Such a meeting would not happen before December 1, when AMLO will take office. Or in other words, “Trust me. You’ll get my anti-narco program mañana.”

Though still evasive, López Obrador was a bit more specific about economic issues. Mexico’s pride has been deeply offended by two worrisome shifts, both the result of relaxed trade restrictions. To the detriment of its peasantry, Mexico now imports corn, a plant that was bred in today’s Puebla state centuries before it was exported, thanks to the Conquest, to the rest of the world. And even though General Lázaro Cárdenas—Mexico’s FDR—nationalized the petroleum industry in 1938, the country now imports natural gas and liquid fuels from Texas. AMLO promises to remove those blights on national sovereignty while at the same time vowing not to renationalize anything.

During his campaign, he didn’t call for class struggle, either. Instead, he declared that Mexican poverty is owed not to wage exploitation but to corruption in government ranks. In keeping with his record as Mexico City’s mayor, he promised an austere government with a balanced budget. Funds for social welfare programs, he ventured, will come not from increased taxation of the rich, but only from the savings good government brings. His new image and packet of promises probably reflect a failsafe strategy. He didn’t want to risk a narrow defeat or red-baiting again; in 2006, he was defeated by a dubious half-percentage point, and in 2012, his campaign was derailed by depiction as a groupie to Venezuela’s leftist Hugo Chávez. AMLO has never professed socialism, but on the other hand, the same can’t be said of most of the coterie he leads. Detractors on the right note that he has an eleven-year-old son whose name is Jesus Ernesto, and AMLO freely admits that the boy’s middle name honors Ernesto “Che” Guevara, the deified revolutionary who rose to stardom under Cuba’s Fidel Castro.

Last Wednesday he dedicated his closing campaign speech to the Tlatelolco martyrs of 1968 and to a dozen Mexican figures who in years past crusaded for transparent elections. Nine of those he named were socialists, communists, or agrarian rebels. That sent a coded message, a “dog whistle,” as Americans would say. AMLO’s left-wing heroes are not household names, nor are they revered in Mexico—except by his activist base. Because AMLO styles himself as a nationalist, the New York Times has in the past two weeks published two op-eds comparing AMLO to Donald Trump. Both men may be populists because, in gambits to win the support of ill-informed voters, they’ve simplified and sloganized issues that are complex. But they are not kindred nationalists. Ever since its loss of greater Texas, Mexican nationalism has been a defensive posture, not an aggressive one—and it certainly has lacked the racial overtones of Trump’s own messaging and policies.

Nearly thirty years ago as a business-page correspondent for the now-defunct San Antonio Light, my job was covering the run-up to NAFTA, which opened Mexico’s doors for American exporters and investors. One morning when I was touring the campus of a Monterrey industrial firm whose name I cannot recall, the executives who were my hosts conducted me to a grassy area where employees took lunch breaks. There, on a cement pad, sat an aging prototype of a subcompact car. For more than a century, Monterrey has been a steel and glass center, and its leading figures had teamed up, about the time AMLO was born, to begin producing the car for the Mexican domestic market. But when they went to Mexico City to seek permits, they were rebuffed because the federal government had other plans: it had just granted an American company permission to set up a plant for assembling cars from parts made in the U.S.A.

Today, Mexico not only assembles parts, it manufactures them as well as entire cars. A grand complex of auto manufacturing is growing in the Monterrey region, but as of yet Mexico has no national auto brand, nothing owned and made there. It has a population about twice the size of South Korea, yet it imports Korean vehicles.  Now that Americans drive subcompacts, Mexico could conceivably produce cars for export to the United States as well as for the market at home. Perhaps we shouldn’t be surprised that there’s talk that Carlos Slim and other investors may launch a Mexican car—but for export only to Latin America.

AMLO, like all the candidates in this year’s presidential race, has promised to create jobs in Mexico with the kind of wages that auto plants pay. If his presidency is to be a success, I’d say that, among other things, to build his country’s pride and to win the trust of men who ride with bodyguards in black limousines, he has to find a way to realize the Monterrey magnates’ frustrated dream. 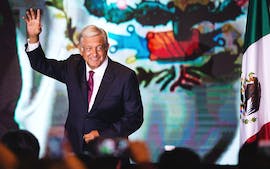 All You Need to Know About Mexico’s New President 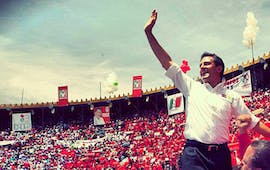