The Trump administration this week will begin implementing its “Migrant Protection Protocols” in El Paso, requiring some migrants to return to neighboring Ciudad Juárez, Mexico, while their asylum claims are processed in U.S. immigration courts. That controversial program has been underway since January 2019 in California, but this will mark its first use in Texas, according to multiple sources who spoke to Texas Monthly on the condition that they not be identified because they weren’t authorized to speak publicly about the plans.

The American Civil Liberties Union and other groups have filed a lawsuit in San Francisco challenging the legality of the plan to have asylum seekers wait in Mexico while their cases are heard in U.S. immigration courts. A hearing is scheduled on Friday on a request for a temporary injunction to block Migrant Protection Protocols. Critics say it puts migrants in dangerous conditions in cities like Ciudad Juárez and makes it difficult, if not impossible, for migrants to obtain legal representation.

Homeland Security Secretary Kirstjen Nielsen has called MPP a “humanitarian approach” that “will help to end the exploitation of our generous immigration laws.” Opponents see it differently. “This is not good policy; this is calculated disorder and contempt for human life,” said a statement from Hope Border Institute, an El Paso-based nonprofit organization that promotes Catholic social teaching. “It seems there are no limits to this administration’s efforts to skirt the bounds of legality, trespass basic human decency and trample on the dignity of those availing themselves of the law to protect their lives and the lives of their families.”

Mexico’s official position is that MPP is a unilateral action by the United States, but the government hasn’t objected to the return of migrants from San Ysidro and Calexico in California to Mexican border cities. The first immigration court hearings for migrants waiting in Mexico began this week in San Diego, after they were postponed from last week because of government scheduling glitches, the San Diego Union-Tribune reported. In El Paso, preparations for the program began on Tuesday, “and returns [to Mexico] are expected to begin later this week,” a spokesperson said.

El Paso has been the focal point of the recent massive surge in Central American migrant families who cross the border, surrender to U.S. agents, and request asylum. The Border Patrol on Tuesday said El Paso sector agents have taken into custody an average of 570 migrants a day over the past month, with 90 percent occurring in the El Paso urban area rather than more remote areas of New Mexico. “These numbers continue to stretch the resources available to the U.S. Border Patrol to deal with this influx and the challenges that come with it,” the agency said in a news release. Migrants crossing the border in El Paso are doing so in an area that is heavily fenced. But the barriers are well north of the Rio Grande, the international boundary, and aren’t a deterrent to migrants who aren’t seeking to evade Border Patrol agents.

Ciudad Juárez also is feeling the strain of the migrant influx, with more than 2,700 people waiting in shelters for the opportunity to come to a U.S. port of entry and request asylum, according to the Mexico City newspaper La Jornada. The newspaper said U.S. Customs and Border Protection officials had stopped allowing any asylum claims at El Paso ports of entry. A CBP spokesman said that reporting was inaccurate but also noted, “When our ports of entry reach capacity, we have to manage the queues, and individuals presenting without documents may need to wait in Mexico as CBP officers work to process those already within our facilities.”

The implementation of Migrant Protection Protocols, previously called “Remain in Mexico” by the administration, would further strain resources in Ciudad Juárez. The migrants waiting to approach ports of entry have already filled shelter space past capacity. La Jornada reported that the Chinese manufacturer Foxconn had offered to employ three hundred migrants at its plant in nearby San Jerónimo, Mexico, but is waiting on Mexican immigration officials to approve work permits.

Annunciation House, the El Paso nonprofit that provides food and shelter to migrants released by U.S. officials, has scrambled to find additional shelter space. Hundreds of migrants have been sent in recent days to Albuquerque and Tucson because shelters in El Paso and nearby Las Cruces, New Mexico, have reached capacity. 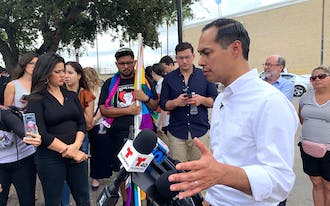