The plastics industry may no longer have an excuse to pollute American waterways. In the largest-ever settlement of a Clean Water Act suit filed by private citizens, the petrochemical company Formosa Plastics agreed this week to stop releasing plastic waste from its plant in Point Comfort, bucking the conventional wisdom that “zero discharge” is impossible. That means no pellets, no powder, no flakes—and fewer reasons why other industry giants can’t follow suit.

The $50 million settlement follows a protracted legal battle between the company and a group of concerned Texans. As Texas Monthly has reported, for nearly four years, a shrimp boat captain turned environmentalist named Diane Wilson and a crew of former Formosa employees collected nurdles—the pellet-shaped building blocks of plastic consumer goods—to prove that Formosa was violating its permit. They hiked and kayaked along the banks of Cox Creek, the brackish stream that feeds into Lavaca Bay and receives much of Formosa’s plastics-laden storm and wastewater, documenting their findings.

Their trove of roughly 30 million nurdles served as the physical evidence in Waterkeeper v. Formosa. In August, a federal judge decided in favor of Wilson and her fellow plaintiffs, ruling that Formosa’s violations were “enormous.” Next came the punishment phase. Though the plaintiffs originally asked the judge to levy $166 million in penalties, the parties agreed to a settlement this week. Formosa will pay a $50 million fine and eliminate plastic discharges from its Point Comfort plant. Experts are hailing it as a historic settlement that has the potential to change the way the U.S. plastics industry handles its pollution problem.

“This is a company voluntarily agreeing to no discharge of plastics. This is not a court telling them they have to,” said Amy Johnson, an attorney with Texas RioGrande Legal Aid who represents the plaintiffs. “That should set the standard for the industry.” In a press release, Formosa executive Ken Mounger wrote that the settlement demonstrates the company’s “commitment to manufacturing products in a safe and environmentally friendly manner.” (A spokesperson for the company said that no one was available to be interviewed for this article.)

The settlement dictates, in great detail, how Formosa will revamp its cleanup and wastewater systems to reach the zero-discharge goal. In the coming months and years, the plaintiffs will play a central role in selecting engineers and monitoring the company’s progress. Citizens will be encouraged to keep collecting nurdles and report their findings to a monitor, whose appointment must be approved by both parties. Kelly Haragan, the director of the environmental law clinic at the University of Texas School of Law, believes this process could serve as a model for the responsible management of nurdles nationwide and setting a higher regulatory standard.

“The industry has argued in the past that it wasn’t an achievable standard, but I don’t think [Formosa] would’ve agreed to it unless they thought it was doable,” she said. “That is big,” she added—especially in today’s plastics boom. “When other companies are coming in for permits now, that should be the default standard.”

Formosa’s $50 million will not go to the plaintiffs. Instead, it will be funneled back into the local community to fund educational, research, and conservation initiatives along the Texas Gulf Coast—an outcome that wouldn’t have been possible if the case had gone to trial again and the penalties were paid to the federal government, Johnson said.

Wilson, who has been protesting Formosa for nearly three decades, doesn’t plan to stop kayaking up and down Cox Creek, snapping photos and scooping up nurdles. “We’ll be involved every step of the way. If it’s not resolved, we can take it to the judge,” she said. “We want zero discharge. It’s not just a theoretical idea.”

The case is also proof that “regular citizens can make a difference,” Wilson said. “But they have to be persistent,” she added. “We didn’t have expertise, we didn’t have money, we didn’t have support. It just takes a little blood and sweat.” 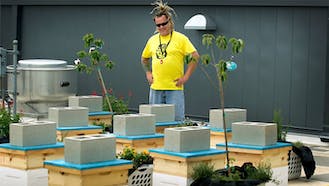