For West University Place Republican Sarah Davis, the contemporary metal and glass event hall at Evelyn’s Park Conservancy was an ideal place to launch her campaign for a fifth term in the Texas House. This upscale pocket park in Bellaire is a green-lawn oasis in one of the wealthiest legislative districts in Texas—the local income is almost three times the state average, and four out of every ten houses have a value of more than $500,000. The surrounding neighborhoods are filled with academics from Rice University as well as the greatest concentration of doctors in the state, more than seven thousand, mostly working at the Texas Medical Center.

Despite the gilding, the district leans Democratic. Hillary Clinton carried it over Donald Trump in 2016. And, although she lost statewide, Democrat Leticia Van de Putte of San Antonio got more votes here in the 2014 race for lieutenant governor than Houston Republican Dan Patrick. This is a district that will vote for a Republican, but only for the right kind of Republican.

“This is a swing district, and you have to be able to have nuanced positions and understand who all you represent,” Davis told me late one evening this week as we sat at the formal dining table in her West U. home. “I represent the people here. I do not represent Greg Abbott.”

Just two hours earlier, the Evelyn’s Park facility where Davis had launched her reelection bid had turned into a tea party rally against her. It almost looked like her opponent was Governor Greg Abbott, not the challenger on the ballot, attorney Susanna Dokupil. In one of the oddest turns of modern Texas politics, Abbott has put his political reputation on the line in an effort to defeat Davis, spending more than $161,000 of his own campaign money on commercials portraying Davis as a liberal Democrat masquerading as a Republican.

This test of political strength has become symbolic of the larger struggle in the Texas Republican Party this year. Faith-based social conservatives who oppose gay rights, promote abortion restrictions and private school vouchers, and oppose government in general are pitted against fiscal business conservatives, whose views on limited government do not preclude investments in transportation and education.

During the legislative sessions last year, Abbott was miffed that the House did not give him the respect he believed he deserved. This year he is sending a message: If you can’t respect me, fear me. Abbott also is supporting challengers to two other House Republican incumbents. The risk to Abbott is that if these incumbents win in spite of his opposition, it will send a message that he can be ignored.

A few hours before I met with Davis to discuss her race, I went hear Abbott speak out against her at a get-out-the-vote rally. Abbott is investing himself so deeply in the challenge to Davis that the name of her opponent almost seemed like an afterthought. “Now, there is nothing wrong with Sarah Davis running for state representative,” Abbott told the gathering, “as long as she is honest with the people in her district, telling people that she is the Democrat that she votes to be!”

Modern governors have supported candidates running for open offices or reelection, but by supporting challengers to incumbent Republicans Davis, Wayne Faircloth of Galveston, and Lyle Larson of San Antonio Abbott is breaking with a long tradition of governors supporting members of the same party. With more than $40 million in the bank and no apparent serious challenge of his own from either party, Abbott can afford to take the risk. But what explains the fervor with which he has gone after these three Republicans?

Voting records alone do not explain it. Although Davis is the Republican House member who comes closest to voting like a Democrat, in a study done by Rice University political scientist Mark Jones, Faircloth is one of the more conservative members of the House, and Larson is just a little to the left of the Republican median on the conservative/liberal scale.

Jones believes Abbott targeted the three Republicans because they questioned his ethics in taking campaign donations from individuals who receive state appointments from the governor. The three offered a bill during the special legislative session to restrict this kind of pay-to-play activity by any governor, but it looked like it was aimed at him. “Abbott viewed it as an affront,” Jones said.

There are other reasons why Abbott might choose a candidate like Dokupil in an open race over Davis if this was an open race. Abbott is an anti-abortion Catholic, and Dokupil opposes abortion; Davis believes in a woman’s right to choose. Dokupil worked for Abbott as an assistant solicitor general when he was state attorney general and defended the Texas state pledge of allegiance at the U.S. Supreme Court.

Dokupil has had the support of Texas Right to Life and Texans for Vaccine Choice, a group opposed to mandatory vaccinations of school age children.  She also has had support from at least one member of the far-right Texas Freedom Caucus, and the warm-up for her rally with Abbott featured Robin Lennon, a rock star of the tea party movement in Harris County. Lennon lives in Kingwood 35 miles away, so her appearance in Bellaire was more symbolic than anything else, but it was just the kind of symbolism Abbott wanted. “It is the people who power this state, and it is Susanna and I who will be the guardians of the individuals and the citizens of Texas who represent the heart and soul of this great state,” Abbott said. “This is a fight for the very future of both the Republican Party and the state of Texas.”

For her part, Dokupil told the crowd she would support Abbott on property tax reduction and passing private school vouchers. Mostly, though, she just reminded everyone that Abbott was with her. “There are a lot of special interests out of Austin who are going to have my opponent’s back in this race,” she said. “But the governor and I are going to have your back.”

When I visited Davis two hours later, she had just finished her own political speaking event and apologized for her voice. Like much of the rest of Texas, she has the nagging cough of 2018. Davis said she is feels confident that she will win the primary contest, mostly because Dokupil accepted the support of Texans for Vaccine Choice. “It’s just the whole anti-vaxxer thing. I mean, come on, I represent the medical center, the world’s largest medical complex,” Davis said. “You think they’re going to vote for an anti-vaxxer? Not a chance in hell.”

Davis makes that point, among others, in her tough response commercial to Dokupil.

Davis believes Abbott’s reason for going after her is fundamental—to make legislators believe they will get a primary opponent if they don’t do exactly what Abbott wants. She said Abbott had promised the House Republican Caucus in 2015 that he would support them in the next election if they would vote for his pre-kindergarten legislation that was controversial with tea party voters. When the election came around, Abbott failed to show. So during the session last year, the House was just not willing to follow his lead, she said, because he hadn’t followed through. Now, it is just about creating fear.  “Why, why else would you do this? Why unless it’s just because ‘I am, I want to be a dictator, and if you are not going to follow me lockstep, then I’m going to get rid of you.’”

Whoever wins the Republican primary will face a Democrat in the general election, either scientist and business owner Allison Lami Sawyer  or perennial candidate and gadfly Lloyd Wayne Oliver.

I asked Davis if Dokupil wins the Republican nomination can she defeat a Democrat in the district? “No, not for one second,” Davis said, sitting up straight with an air of self-confidence. “If I am the GOP nominee, which I believe I will be, then I think it’s a whole different ballgame because I know locally the Democrats have no taste to invest and spend the kind of money [it would take to win]. They tried it in 2012 after my first session. I think they spent over a million dollars, and I won by ten points.”

The Republican civil war this year is the culmination of a quarter century of Republican Party dominance in state politics. Statewide issues now are most readily decided in the Republican primary. As historian George Norris Green wrote about Texas politics in the 1950s, when the state was one-party Democratic, “With only one party, considerable dissidence is inevitable within it—there is no other place to go. Even after the frustrations and frayed nerves of internecine warfare, the Democrats find themselves in the same ring.”

Sarah Davis believes the Republicans have now fallen to a trap with social conservatives promoting “antics on bathroom bills” and “harping on abortion constantly,” instead of addressing broad state issues. 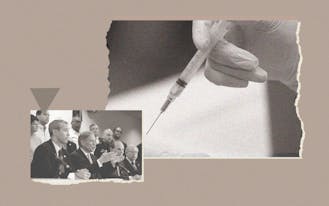