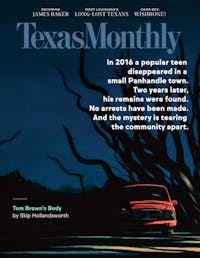 From the October 2020 Issue Subscribe
This interview was originally published on August 11, 2020.

Sheryl Sculley served for fourteen years as city manager of San Antonio, the third-fastest-growing municipality in the country. She was regarded nationally as one of the most accomplished professionals in her field. By the time she retired in 2019, she had thoroughly reorganized the city’s operations and finances, earning it a AAA bond rating that has saved taxpayers millions of dollars in borrowing costs. Famously, she had battled the city’s powerful police and fire unions and reined in extravagant health insurance that—along with other benefits and wages granted decades earlier—would have, if left unchecked, eaten up all the city’s revenues as early as 2024.

Sculley was not able, however, to secure the political support necessary to change the police union contract in ways that would enable the chief to discipline or dismiss the relatively small proportion of officers who repeatedly used excessive force, had sex with women they arrested, and, in one case, stuffed a sandwich with dog feces and fed it to a man who was homeless and hungry.

The daughter of a labor leader, Sculley has chronicled her experiences with the police and fire unions in a new memoir, published by Lioncrest in Austin, and titled Greedy Bastards: One City’s Texas-Size Struggle to Avoid a Financial Crisis. It provides a timely guide to reform that’s at once cautionary and encouraging. We spoke with Sculley by phone from her home in San Antonio. This interview has been edited for clarity and length.

Texas Monthly: Texans have a lot on their minds right now, Sheryl. Why should they be interested in contracts for police and fire unions?

Sheryl Sculley: Well, one of the big things we’ve got going on is a recession that’s slashing the tax revenues that cities collect, in Texas and around the country. Because of COVID-19, San Antonio has lost $200 million in anticipated revenue for the fiscal year that ends next month. Nobody wants to raise taxes during a recession, so cities have to cut spending. And one of the fastest-growing expenses for many cities is health insurance and other benefits for police officers and firefighters. These benefits are far in excess of what the vast majority of taxpayers can afford for their own families.

A second big issue right now, of course, is the protests for greater accountability of police officers. Reform has to include making it much less difficult to discipline and dismiss those who repeatedly use excessive force. The union contracts dictate not only wages and benefits but disciplinary procedures. If we want to get bad cops off the streets, we have to address the union contracts that today make that very hard to do.

TM: The title of your book, Greedy Bastards, is provocative. Why did you choose that?

SS: One of the union leaders, recorded on video, used that phrase to describe how he thought they were being perceived during the contract negotiations. I have great respect for our first responders, and good relationships with many in the rank and file. As city manager, I was adding fifty to one hundred police officers a year, to keep pace with San Antonio’s growth. So I don’t blame police officers and firefighters for taking what they can get in terms of compensation. I do have issues with union leaders who don’t negotiate in good faith and don’t take into account the interests of the taxpayers who pay for their salaries and benefits. Ultimately, it’s up to city officials, elected and appointed, to stand up for those taxpayers and oppose unreasonable union demands.

TM: You were able, against long odds, to rein in unaffordable health-care benefits, saving San Antonio more than $150 million over five years. But you didn’t have the same success in making it easier to discipline and dismiss officers who repeatedly used excessive force. What did you want to change, and why wasn’t that possible?

SS: The police and fire unions, in San Antonio and elsewhere in Texas, are a powerful political force. Thanks to laws passed by the legislature in the 1980s, these unions are allowed to endorse political candidates, contribute money to them, and provide lots of volunteers for their campaigns. As a city manager for thirty years, in places like Phoenix and Kalamazoo, I’d never encountered a situation where police officers and firefighters could be this actively involved in picking the officials who would decide their compensation and discipline.

Elected officials are understandably wary of challenging these unions. If they don’t like you, they’ll find an opponent to run against you and support that challenger. The firefighters work 24 hours on and 48 off, so they in particular have lots of time to knock on doors.

It’s a classic protection racket, and it can get ugly. When Nelson [Wolff, the county judge for Bexar County, which includes San Antonio] wouldn’t take political contributions from one of the unions, they sent him a fancy gift basket with a dead rat in it. During negotiations on the police contract, some officers would tail members of our negotiating committee when they were driving, in what we assumed was an effort at intimidation.

When you’re an appointed city manager, you have to have the support of the mayor and city council for anything you do. I was fortunate to have that support for taking on the financial issues, which required courage on the part of our elected officials. But that support was lacking for the changes needed to make police officers more accountable. I don’t say that as a criticism: Every elected official has to weigh how many controversial issues they can take on at any one time. The council had grown weary of the fight, and the I think the community had, too.

I must add that we were in different times then, in 2016. My hope is that the very different moment that we’re in now, with all the protests for racial justice, will create more political support for changes in the way we run our police departments. The current police union contract in San Antonio expires in 2021, so we’ll see.

TM: Please give us some specifics about how police discipline works under the current contract in San Antonio, and what needs to change.

SS: Under terms of the police contract, disciplinary actions are subject to strict limitations. They can be appealed and many are. Often suspensions are reduced to written reprimands. When an officer is accused of misconduct, he gets 48 hours to get his story straight before being interviewed by internal affairs investigators. No civilian suspect gets that. The police chief cannot base his discipline on that officer’s entire personnel file, or it will get overturned in the arbitration process. If the officer hasn’t made the same mistake within two years, his record before then is off-limits. We might have a five-page list of infractions in the officer’s file, and less than a half page of that is admissible in arbitration.

If the officer is successful in concealing his or her misconduct for a while, and the chief doesn’t learn about it within 180 days of it happening, he’s not allowed to impose any disciplinary action. That’s what happened with the officer who served a shit sandwich to a homeless man.

We’ve fired officers for beating up unarmed suspects, having sex with suspects, and when the officers have appealed, we’ve been forced to take them back.

TM: Federal job-safety statistics show that, thanks to better fire codes and training and equipment, firefighting is no longer among the top twenty most-dangerous occupations, ranking behind jobs such as trash collection and construction. And even police work is safer than such jobs as roofing and farm labor. So what’s the rationale for giving police and firefighters pay and benefits that far exceed what the typical taxpayer can afford?

SS: We still see tragic losses of firefighters and police officers in the line of duty. But it’s true that firefighting has become much safer. Only about 18 percent of a firefighter’s work today is fighting fires. About 82 percent is responding to medical emergencies.

Since the COVID-19 pandemic struck, we’ve been reminded that many other kinds of essential workers take big risks for the public good, from nurses to package deliverers to workers in grocery stores. And we have to keep in mind that the median family income in San Antonio is only about $50,000 a year. A fifth of our residents fell below the poverty line at last count, and that was before COVID.

Another important point is that most of our police officers and firefighters live outside San Antonio, in part because taxes are lower in the suburbs. Here again, they got the Legislature to pass laws prohibiting cities from requiring that they live in the city they serve. So it’s easy for union leaders, looking for higher compensation, to say, “Just raise taxes.” If we did, they wouldn’t be the ones paying those taxes.

TM: During the contract negotiations, the union leaders decided to target you very publicly and personally, including by criticizing your demeanor, attacking your compensation, and successfully promoting a ballot measure to reduce pay for future city managers. Would they have treated a man in the same way?

SS: No, I don’t think they would. One of the union leaders told a city council member that they didn’t want to “lose to a girl.” I just laughed and said, (a) I’m sixty years old, so not really a girl, and (b) This is 2016, and there are lot of women now in important positions.