If you couldn’t tell by the epic sixteen-woman medley that kicked off last night’s Country Music Association Awards, this one was for the girls.

Cohosts Dolly Parton, Reba McEntire, and Carrie Underwood opened the show with a rendition of “Those Memories of You,” which bled into an assortment of country classics sung by luminaries like Martina McBride, Jennifer Nettles, Sara Evans, the Highwomen, and Tanya Tucker.

In a field historically dominated by men, female country artists have consistently held their own and gone on to become some of the genre’s biggest icons. But rarely does the industry dedicate so much attention (or airtime) to them. A recent report examining nineteen years of country airplay charts revealed that the total number of spins for female artists on year-end airplay reports declined 66 percent between 2000 and 2018, with female vocalists making up just 11 percent of the top 150 songs last year. Last night offered a glimmer of hope that things could finally change.

For the first time in the CMAs’ fifty-two years, women were nominated in every category (except male vocalist of the year). And while the show’s opening paid tribute to the genre’s female legends, two of the night’s winners proved that the future of country music might be right here in Texas.

Golden girl Kacey Musgraves racked up an early win for music video of the year with her song “Rainbow,” and Maren Morris led the competition with a whopping six nominations. Morris—who has been touring with her sophomore album, Girl, this year—also became the second woman in CMA history to be nominated for album, single, and song of the year more than once. That both Texans are crossover artists who have attracted fans in and out of country music is just a point in favor of their staying power.

After an impressive performance of her title track, “Girl,” Morris gave a tearful acceptance speech for her album of the year win. Thanking her family and management, the Arlington-born singer-songwriter fought back tears as she mentioned the late producer Busbee, who passed away in September.

“I would be really remiss if I didn’t mention a huge facet of why this album sounds the way it does, and we miss him so dearly,” she said. “He texted me the morning we got the nomination for album of the year this year, and we were so excited, and that’s our friend Busbee.”

Musgraves took home one of the night’s top awards, with her first win for female vocalist of the year, presented to her by country icons and former winners of the honor, Janie Fricke, Pam Tillis, Kathy Mattea, and Martina McBride.

“Words can’t express just how meaningful and truly unbelievable these past couple of years have been,” Musgraves said during her acceptance speech. “Ultimately, I just want to say that I feel that the female creative spirit, female energy—it’s really needed right now, it’s really important and I feel like it’s something that earth needs.”

And while the artist won for her Golden Hour single “Rainbow,” she teamed up with Willie Nelson for a different multicolored song, performing The Muppets Movie song “Rainbow Connection,” in what was quite possibly the purest and most wholesome moment of the night. (Warning: watching footage of the performance may leave you misty-eyed.)

Nelson’s singing was a bit gruff, more spoken than sung; Musgraves’s clear-toned voice was a perfect complement that showed off why the collaborators are such a well-matched duo. At the end of the duet, Musgraves capped off the performance with the fitting final words of “Rainbow”: “It’ll all be all right.” 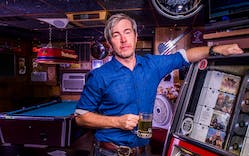 For Singer Bill Callahan, Home Is Where the Art Is