The crowd at Austin’s Paramount Theatre erupted in thunderous applause when Dave Chappelle walked onstage. But the world-renowned comedian, who dropped in unannounced, was only there to introduce the main act: comedian and proud Houstonian Mo Amer, whose set that night would be turned into a Netflix special. “Texas, it’s your night,” said Chappelle to a roaring crowd. “Texas, you’re giving birth to another star.” The audience erupted as the red curtains drew back to reveal Mo Amer, dressed in green sneakers and black jeans.

Amer has spent years on the road opening for Chappelle, but he still took the time to fill everyone in on his backstory. He lived in Kuwait until age nine, when his family fled to Houston seeking asylum during the Gulf War. He described how his family members’ lives were forever changed by the war, and how alongside his mother and his sister, he took the danger-filled journey to America to seek refuge, and how he had to wait twenty years to gain U.S. citizenship.

The experiences of an Arab-American refugee fleeing his war-torn home and growing up in the U.S. don’t inherently lend themselves to stand-up, but Amer managed to talk about his childhood in a way that both gave the audience a window into his perspective and kept them laughing. Amer told the story of how he, his sister, and his mother made a terrifying journey from Kuwait to Houston. His mom distributed their money among the lining of her purse, custom money belts she and Mo’s sister wore, and the lining of their suitcase. Amer described the “extremely traumatic moment” of arriving in Baghdad and looking out the bus window to see that all of the passengers’ suitcases were being ripped apart. Anything of value was being taken.

He said his mom looked out the window and said “Oh my God—I need to find that money.” They looked at his sister and could tell she was panicking. Amer’s description of his sister’s reaction sent the audience into hysterics: “She has zero gangster skills! She is sweating profusely—she’s about to sell everybody the f— out for sure. I tell ya, if anybody walked up to her [and asked], ‘Is there something we need to know, little lady?’ my sister would’ve cracked and yelled, ‘We have MONEY!’ As he told the story, the tension and fear that he and his family felt was tangible, and yet he had the audience roaring with laughter and applause throughout.

The comedian also reflected on his Arab name, saying “it’s a weird time to be Mohammed.” Alluding to the Islamophobia professed by some Americans, Amer said, “You know, Mohammed is the most popular name in the world, but I can’t find one keychain with my name on it. Not one person has shared a Coca-Cola with me in America.”

Amer recounted a flight he took a couple of years ago, when he was randomly upgraded to first class and seated next to Eric Trump. “I didn’t know I was gonna get upgraded to first class, much less sit next to Eric Trump,” he told the crowd on Thursday. “But I do know one thing—the lady that upgraded me was probably a Clinton supporter. Let’s be real. I think she was just sittin’ there like, ‘Oh, oh, oh, Eric Trump is on my flight? Okay, okay, okay, oh, there’s an empty seat next to Eric? Okay, mhmm mhmm, let me take a look at the upgrade list and see who’s standing by patiently here. Oh, Mohammed Mustafa Amer?! UPGRADE!’” After startling the president’s son with “As-salaam alaikum, Eric!” (an Arabic greeting that means “peace be unto you”), Amer told him not to worry—he was a comedian, so he had to mess with him a little. “I said, ‘Relax, man, my name’s Mohammed, I’m Muslim, I’m Arab, you know?’” Amer told the rapt crowd. “’Oh, and by the way, I came here as a refugee—too late, bitch, I made it! You tell your dad to build all the walls he wants.’”

The large crowd at the Paramount wasn’t just packed with local fans. According to Chappelle, comedians came in from all over the country to support the “beloved member of their community,” including Houston hip-hop legends Trae tha Truth and Willie D from the Geto Boys.

In his Netflix special, which will air on the site this fall, Amer will introduce his voice as an Arab-American refugee to a much wider audience.

Listen to Andy Langer’s recent interview with Mo Amer on the National Podcast of Texas. 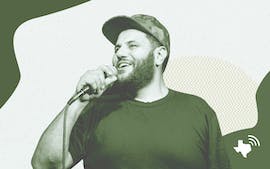 Mo Knows Immigration: Houston Comic Mo Amer on His Own Journey to Citizenship 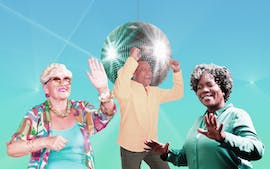 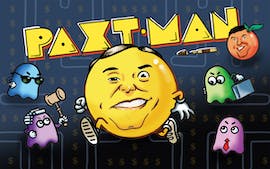 Bum Steer Awards, 2021: Get Ready for the Amazing Adventures of PAXT-MAN!