Under the Trump administration’s zero tolerance immigration policy, the border between the U.S. and Mexico has become the subject of an unceasing national debate. But for much of its history, the dividing line was top-of-mind only for the people who lived and worked along it: a logistical barrier, but also an accepted factor of everyday life, one that influenced the every aspect of the communities surrounding it.

That’s the border depicted in Retablos (October 16, City Lights Books), a memoir by El Paso native Octavio Solis, a renowned playwright who served as a cultural consultant on Pixar’s Coco. His El Paso isn’t a political battleground, it’s a backdrop for familial tension, adolescent longing, and nascent ambition that marked his childhood in the sixties and seventies. Solis examines the border as mythology—one of neighborhood ghosts and heroes from Mexican comic books, where the looming monster can be a Border Patrol agent or a simmering resentment between brothers. “Sometimes the gods are our presidents on both sides of the river, and sometimes they’re a ten-year-old boy,” says Solis. “It complicates our assumptions of what the border is.”

The memoir is told through short, vignette-like character studies of his formative figures and experiences: Consuelo, his family’s maid, in evening prayer; his sister turning away from her maternal role in a family of brothers. He modeled the format after retablos, Mexican devotional paintings that often depict a character receiving salvation in a precarious situation. The device freed Solis from the conventions of plot that playwriting dictates. “It felt like these stories wanted to go to quiet revelations, to epiphanies that happen not when you’re building things to a dramatic climax,” he says.

To reach those quiet revelations, Solis embellished the stories of his youth, maintaining the “essential pith” of the narrative but inventing details. To him, that replicates how one re-tells a memory—and how one inevitably mythologizes the formative characters and experiences of his or her childhood. “That can bring us closer to the truth,” he explains. “If I thought of the painful aspects as happening to a fictional Octavio, I got at some essential truth about them that I never would have arrived at had I stuck to the facts.”

The result is a series of scenes that illuminate a particular place and time by setting universal experiences within them. As a self-conscious teenager working at Chico’s Tacos, where his father is the day cook, Octavio the character learns about how a parent changes in a context outside the home—and sees his coworkers without papers get deported. When, while playing hide-and-seek behind his house, young Octavio finds a young woman hiding from Border Patrol, he experiences a startling moment of intimacy and longing alongside her grim desperation. The border is the framework for Solis’s coming-of-age: it’s a political issue, but also the lore of his childhood.

For Solis, who hasn’t lived in El Paso since he was eighteen, the scenes take on not only the flash fiction form of retablos but also their function. Traditionally, the folk art paintings act as an expression of gratitude towards the divine forces that shaped a life: La Virgen de Guadalupe, saving a woman suffering from influenza; San Isidro, patron saint of farmers, rescuing a family’s harvest from a plague of locusts. For Solis, a now-faraway son of the border, Retablos pays homage to the characters and the everyday miracles that guided him.

Through his characters and his memories, Solis offers a nuanced portrayal of a border community beyond the “border issue.” He hopes that gives readers a way to glimpse life on the border beyond the headlines and executive orders. “Before, the border was a fact of life, and now it’s gotten to a point where everybody has to have a stand on it,” Solis says. “Rather than ideas and precepts and arguments, I chose to focus on the people. That’s where one can gain a real understanding of what these issues are really about.” 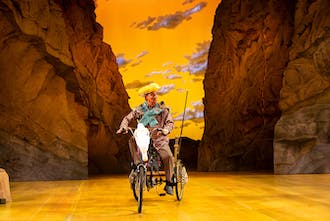