If you subscribe to the primary stereotype of millennials as lazy, entitled hipsters in their twenties who destroy the institutions of the past because of their own selfish desires for avocado toast, then the Texas zip codes they’re moving to might surprise you.

Those stereotypes tend to be off-base, of course. “Millennials” refers to people born between the early 1980s and the mid-1990s, which means that most people who are entering the workforce in 2018 are actually members of the subsequent generation (the ominous-sounding “Gen Z”), while the oldest millennials are pushing forty. The term refers to a diverse group of adults with different interests and goals, which is reflected in where they’re moving, as shown in a study and data sets provided by RentCafe. 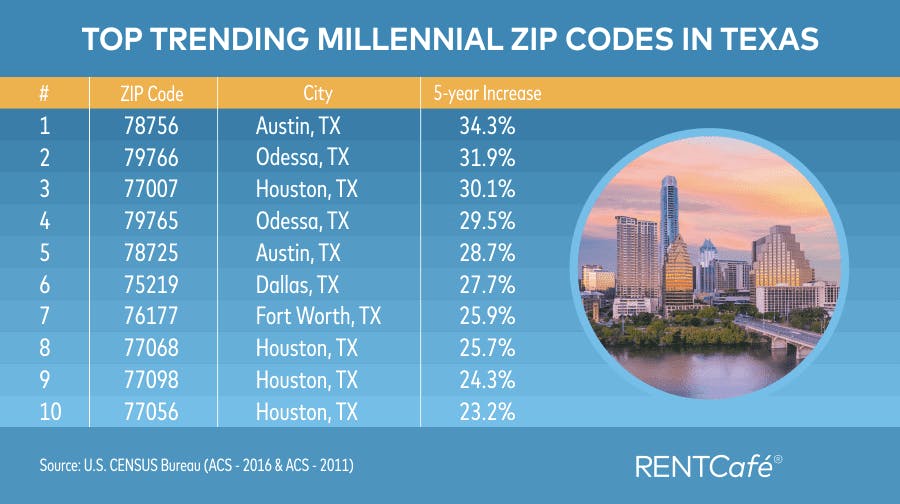 Of the ten zip codes in the state with the largest increase in the percentage of millennials from 2011 to 2016, only two—the central Austin Brentwood neighborhood in 78756 and the Southeast Austin neighborhood in 78725—are in the young person’s paradise that is Texas’s capital. What’s more, two of the top five neighborhoods aren’t in any of the largest cities in Texas—instead, they’re in 79766 and 79765 in Odessa, which saw booms among younger adults of nearly 32 percent and 30 percent, respectively.

Among the top ten zip codes, one of the more notable facts to jump out is the prevalence of Houston, which takes four of the top spots. Most of those zip codes—77007, 77098, and 77056—are right in the heart of the city’s urban core. (77068, on the Northwest side, near Spring, is an exception.) That does track with one piece of the conventional wisdom about what millennials want in their living situations: both in Houston and across the nation, walkable urban areas near downtown tend to be the neighborhoods of choice.

That holds true in Dallas, too, where the 75219 zip code (which includes the central Oak Lawn neighborhood) saw a 27.7 percent increase in the percentage of millennials, making #6 on the list. It’s less true in Fort Worth, where the 76117 zip code, encompassing the more residential Haltom City, was the biggest gainer. That means that only half of the top ten list in Texas actually reflects the national trend toward urban zip codes—and three of those are in Houston (Dallas’s 75219 and Austin’s 78756 make up the other two).

Looking further afield, we can track a few interesting trends among the top 40 zip codes. In Texas, there are only five neighborhoods with populations at least half comprised of millennials: 77007 in Houston, Fort Worth’s 76155 (near the DFW Airport), Dallas’s heart-of-downtown zip code 75201, East-Central Austin’s 78722, and the Uptown and Old East Dallas zip code of 75204.

Looking at the numbers in Dallas, it’s clear what’s driving the push. The city has been working to reurbanize its downtown as a livable neighborhood, and the people buying into that are younger folks. The DFW metroplex has long been booming, but the demographics of who’s driving that boom in the suburbs is different from who’s driving it in downtown Dallas.

One city that doesn’t have a hot zip code for millennials is San Antonio. Of the top 40 zip codes in the state of Texas, only one in San Antonio (78216, a slice of the city’s north side that includes both the airport and North Star Mall) places on the list, at #24, with a population that’s 37 percent millennials. However, that doesn’t mean that the Alamo City isn’t popular among young adults—it just means that, unlike in Dallas or Houston, that population is diffuse rather than concentrated. (Looking at the broader data set of who moved to each city, San Antonio’s millennial population jumped by 10 percent from 2011 to 2016, a higher increase than in Houston or Dallas.)

In fact, the data suggests a broad correlation: the three Texas cities with the largest boom in their millennial populations are Austin (14 percent), Fort Worth (11 percent), and San Antonio (10 percent). Between the three of them, only fourteen zip codes place within the top 40 list (with nine in Austin). Dallas and Houston, meanwhile, are growing more slowly among millennials, each seeing an 8 percent rise in the five years covered by the RentCafe data. Between the two of them, though, they make up an entire half of the top 40 zip codes. That suggests that while Austin, Fort Worth, and San Antonio have successfully made themselves appealing places for young adults to live, Houston and Dallas have done a good job of creating specific parts of the city that cater to their interests.

The numbers point to some other broad conclusions as well. The most popular city in Texas among millennials is Austin, where specific neighborhoods don’t have to cater to them because the relatively geographically compact city already does. San Antonio and Fort Worth are rapidly growing their millennial populations based, most likely, on a combination of access to decent jobs and a more affordable cost-of-living than many of Texas’s other large cities. Dallas and Houston are growing more slowly than the other cities on the list, but have built neighborhoods (perhaps even including establishments with avocado toast) that young adults want to live in, and those folks seem to have found them.