If you want to get a vocal response from readers, forget topics like politics or the Dallas Cowboys—that’s child’s play. All you have to do is put two words together: “beans” and “chili.” More to the point, you need to put the beans in the chili. That’s what David Courtney found out in his December Texanist column, “Cook Like a Texanist.” David is as authentic as they come: Temple native, UT-Austin grad, lover of Willie and barbecue and West Texas sunsets. But he dared to do the one thing that Temple natives, UT-Austin grads, and lovers of Willie and barbecue and West Texas sunsets have been trained not to do since childhood: cook a pot of chili with beans. The feedback, as you will see below, was fierce. But don’t worry, if you decide to try it too, he’ll never tell. And if you ask nicely, as one valiant reader did, he may even share his recipe.

Can’t wait to try the grilling tips on my next ribeye [“Knives Out”]! The oyster deal is a little too exotic for me, and I don’t live close enough to the coast. But the skillet-seasoning and chicken-frying ideas look very doable. Great lifestyle writing as usual from TM.
Robert Owens, via texasmonthly.com

This is a great article. Definitely goes in the saved pile.
Cary Cheshire, via Facebook

Shame on you. You darn sure made me hungry again! And I just had dinner too.
Brook Lynn, via texasmonthly.com

Miss Evelyn Lyles embodies the meaning of generosity, kindness, and helpfulness [“Lost and Found”]. She is an example to us all, and the city of Amarillo is lucky to have her, as are the refugees she devotes her time and efforts to. As a Christian, she is a role model of acceptance and grace. There’s plenty of money in Texas, and I hope some of it finds its way to her and the teachers at the elementary school so that they can put it to good use with translators, tutors, and other life-skills courses that would support the transition to life in America for the refugees. God bless you, Miss Evelyn!
Sandra Sugarbaker, via texasmonthly.com

I saw Ken Paxton’s pathetic TV interviews following the Dallas police shooting [“The Televangelism of Ken Paxton”]. He provided absolutely no new information or insight in the interviews, and it was clear that his appearances were purely PR to try and bolster his horrible (and well-deserved) reputation. I wish I could say that he’s risen to his own level of incompetence and will surely be gone soon, but this is Texas, and the voters here have a tendency to reelect idiots as long as they thump their Bibles and have an “R” after their name.
Karenw729, via texasmonthly.com

The best thing for Ted Cruz to do would be to actually do his job as a senator and show that he is engaged and interested in that position and demonstrate to the people of Texas that he’s actually interested in representing their interests as a whole in addition to his more-partisan priorities [“How Ted Can Get His Cruz Back”]. He appears to have given lip service to the job he was elected to, but he was clearly aiming for the presidency from the outset and let that effort divert his attention from his day job. One of his greatest skills has always been to fire up the base and to make fiery speeches before groups that already agree with him, with the notable exception of his speech at the Republican National Convention. He’s been lackluster or lackadaisical in doing anything else related to his senatorial duties.
Pwt7925, via texasmonthly.com

Yet another reason I envy Texas: having politicians of Cruz’s caliber is a rare thing.
Bob, via texasmonthly.com

Thank you for your election postmortem [“Where Do We Go From Here?”]. For those of us who are anti-Democrat, it hearteningly reaffirms y’all’s continued failure to understand the political mind-set of both Texans and the American people. That factor alone will ensure that the Republican juggernaut continues.
Jeff Goodson, Wimberley

A very delusional postmortem of the presidential campaign. No one is going to buy the writer’s alternative reality.
Lgeubank, via texasmonthly.com

I think Texas Monthly needs to consider exploring outside its protective lefty bubble and find smarter writers who utilize facts, reason, analysis, and evidence in their pieces. Just something to consider. It just might help circulation.
Mickeymat, via texasmonthly.com

Brian D. Sweany hits it on the head with the observation regarding the current Republicans simply trying to out-Republican one another in front of their base.

If our state government would concern itself with things that would actually improve conditions for Texans, it would be different. Instead, the big concerns are practically nonexistent voter fraud and where we pee. Outstanding.
David Alan, via texasmonthly.com

Bean There, Done That

Blasphemer! Heretic! Philistine [“Cook Like a Texanist”]! If you would like to make a nice meaty, zesty vegetable soup, feel free, but DO NOT CALL IT CHILI! Read my lips: NO BEANS EVER! What’s next? Donald Trump as champion of the common man and POTUS?
Lin Sellman, via texasmonthly.com

Okay, so now you are ready to really take a walk on the wild side and throw in a cinnamon stick or two! Make your tongue slap your brains out.
Mark Wilson, via Facebook

Glad you enjoyed whatever that was, but we all know it wasn’t Texas chili.
Ashley Dickson Johnson, via Facebook

Hey, Texanist: You eat off of your plate, and I’ll eat off of mine. Understood?
Steve Rich, via Facebook

I’m curious: If you crush and roast your own cumin, why would you use canned beans? I make a pot of beans almost every week and haven’t used the canned variety for years. Check out ranchogordo.com for a great selection, including pintos. And you don’t have to worry about seaweed.
Michael, via texasmonthly.com

This argument is way out of whack. The line about chili dogs, chili rice, and chili pie says it all. People have always adulterated their “chili,” and I use that word loosely, because in my opinion many of these additions are fine. Except saltines. I converted to tortilla chips ages ago.
Scott Campbell, via texasmonthly.com

I must say that I was conceived, born, and raised in Texas by like Texans. There are over 250,000 square miles in Texas, and to say that making chili with beans is un-Texan is plumb ridiculous. Just because you don’t see beans in an old recipe means nothing. I’m in my mid-sixties, and we all put pinto (there is no other) beans into our winter supper.

This notion of no beans was started by a bunch of yahoos down in what’s barely Texas: Terlingua. Maybe competition chili is sans lentils, but Texas chili can, and in many instances does, have the complementary pinto. And besides, it makes it more fun!
AustinBBQ, via texasmonthly.com 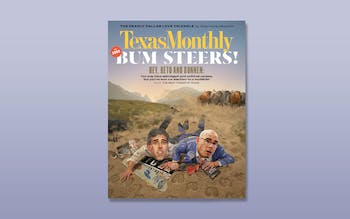