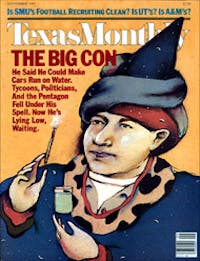 Caprock is a cliff of red and tan rock, fifty to one hundred feet high—a geological formation that runs in a 175-mile line through West Texas. The Caprock, like its younger and weaker world-famous imitator, the Great Wall of China, separates a higher level of civilization from a lower one.

Millions of years ago the Rockies eroded eastward, creating the Great Plains. Near the southern end of the plains, a dry, rock-hard ocean bed rose fifty feet above ground level: the Caprock, a formation that divides even the opinions of geologists. Some of them say it is “a superficial fan formation composed of waste material washed from the Rocky Mountains” (a not very complimentary assessment). Others say it is “a high plateau of survival between two zones of topographical degradation.” One of the degraded zones is at the Caprock’s western edge, out of the scope of our concern, in New Mexico. The other is anywhere south of 32 degrees north latitude and east of 101 degrees west longitude, including, most likely, the place where you live.

Drive out Highway 180 east from Lamesa, go north at the little town of Gail, then northeast from Post to Spur, then north up Highway 70 to Matador, Turkey, and Clarendon. Along most of the route, in front and to the left of you, you’ll see the Caprock’s rise, forming a one-sided canyon. At Post, if you detour a few miles northwest on Highway 84, you can see the Caprock’s sternest, most imposing face. Stop on the Caprock’s crest. Look back over your shoulder: you’ll see the world at the Caprock’s feet. It’s a land of tiny tractors and dryland farming, an area where there’s been no vigor in business affairs since the days, nearly a century ago, when it was a supply house for Caprock pioneers.

Above the Caprock, in the High Plains, nature and life are different. Flatness and the sky appear to the eye—and overwhelm it. Only upon the ocean is the sky more encompassing. Cottonwoods and willows grow above the Caprock, but their stands are so sparse that owls live underground in holes, like rabbits and prairie dogs.

Comanches and buffalo held the Caprock against all takers until the mid-1870’s, when the region became, briefly, the stomping grounds not of stockmen but of real, raw pioneers. Even the railroads—and with them, farmers—didn’t show up on the Caprock until about the turn of the century. Above the Caprock, the Panhandle’s settlers became insular, ornery, and individualistic: Texas in the mold of myth.

Their highly mechanized, irrigated—and subsidized—family farms, plus a few oil and natural gas discoveries, made the region the most prosperous and stable in the state. Per capita income above the Caprock became the highest in Texas. So what if the plains were the site of dust storms and blizzards? So what if its homes were made of stucco? So what if you can’t buy a Rolls-Royce in Amarillo and the region’s newspapers are unreadable? The exodus that has brought thousands of ungraceful Yankees to Texas has hardly touched the Caprock cities. Take that, Houston!

There are gaps in the Caprock, however, and because of them, the region is changing faster than most natives like. Lubbock and Amarillo have become real cities, and in the rural-to-the-bone Hereford, most people now call the midday meal “lunch” and say they’ll be coming home from work at “five o’clock,” not “sundown.” Since the Dust Bowl years, even lakes have appeared on the arid Caprock. The Caprock’s prosperity may also be faltering. Farming has run onto hard times, and the Ogallala Aquifer, a geological formation beneath the Caprock, is going dry from years of exploitation by irrigators. Unemployment, crime, and ethnic diversity—signs and sources of urban trouble—are on the increase. Like the Chinese two thousand years ago, the people of the Caprock have entered an age in which even a Great Wall won’t hold back the discomforts of the future.