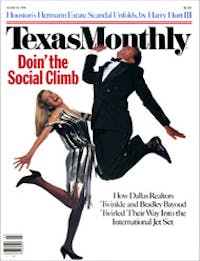 The signs are unmistakable: The eyes burn and turn fiery red; the nose runs; the insides of the ears itch. Incessant sneezing—up to two or three hundred times a day—leaves some victims exhausted. On top of this, an insidious malaise sets in, making it hard to do anything but stare vacantly at the wall, while at the same time a nagging little voice says, “Get up. It’s just an allergy.” 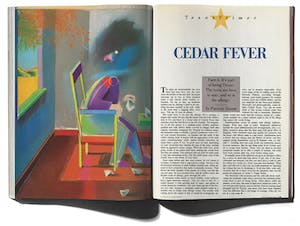 But cedar fever is not just any allergy. It’s a scourge, a plague that smites the just and the unjust who have the misfortune to live anywhere in a broad strip of Central Texas that stretches from the Red River to the Rio Grande. The progenitor of all this misery is a medium-sized, frankly undistinguished tree with sinewy limbs covered in shaggy bark that vaguely resembles orangutan fur. Despite its common name, the mountain cedar is actually a juniper (Juniperus ashei). Every year around December, we blunder into the midst of the cedar’s mating ritual. It begins with the appearance of the male cones—embarrassingly small, amber-colored structures no larger than a grain of rice. In good years (or bad, depending on your viewpoint) they blanket the tops of the trees, turning them an aggressive tawny orange. When the wind rises, great gritty clouds of the pollen drift aloft, making the woods look like they are aflame. This airborne milt can waft for miles until it runs into something sticky, like the small green cone of the female tree or the inside of your nose.

Once cedar pollen gets into your system, its evil nature is revealed. Compared with it, ragweed is a wimp. The key is the biochemical structure of cedar pollen’s protein coat, which appears to have properties that make it unusually noxious. Then there’s the sheer quantity of the grains. In a rainy year like the one just past, the trees produce tons, and the pollen count, the Richter scale of allergy, goes through the roof.

If mountain cedar causes so much trouble, some sufferers have raged (between sneezes), why not clear it out? It’s a health hazard, it robs grazing land of water, and unlike its cousin Juniperus communis, you can’t make gin out of the berries (too bad, because a mountain cedar martini could be a surefire way to forget your allergy woes). The trouble with cutting down the cedars is that it would be ecologically unwise, not to mention impossible. They cover many of the 24 million acres of the Edwards Plateau, providing drought-tolerant, year-round greenery for erosion control, stock and wildlife shelter, and the raw materials for the fence-post industry. Physically and philosophically, cedar defines Central Texas. You can no more think of that terrain without cedar than without live oak or limestone. Sentimentalists would also insist that the resinous aroma of a cedarwood campfire on a starry autumn night is one of the things that makes life worth living.

Sentimentalism scores no points with allergy sufferers, though. What they want is relief. Temporary palliatives include the usual antihistamines and decongestants, plus a sodium cromolyn spray that has been used with good effect in England. Truly wretched cases may qualify for cortisone, but the drug’s side effects make it a last resort. Nutritionists have a theory that any allergy fans the flames of stress, and they suggest taking pantothenic acid (a B vitamin), zinc, or vitamin C. Omitting beef and yeast foods can ameliorate attacks in some instances. But the one thing cedar fever victims can’t do is escape their destiny. Those who are fated to develop symptoms usually do so after a couple of seasons, but some have been smitten after ten, even twenty smug years.

Eventually most of the afflicted end up at an allergist’s office for a series of shots that help about 75 percent of the time. Allergists can reassure you that you don’t have a cold (it runs its course in a week) or a fever (you just feel flushed). What they can’t tell you is why you can build an immunity by injecting the irritant but not by breathing it. If all else fails, your only recourse may be to leave town for the duration; that was the preferred treatment of writer J. Frank Dobie.

The obsession with nostrums and the wild talk about eradicating the mountain cedar miss a perverse but essential point: Cedar fever is part of being Texan. Other places suffer the malady, to be sure, but none of them have Juniperus ashei. It’s our own personal poison, part of Mother Nature’s hazing ritual designed just for Texans, and those who have been initiated wear the addiction like a red badge of courage. After all, we are in a war zone.