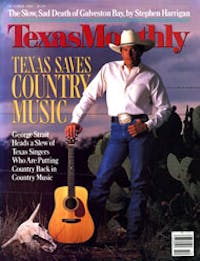 Blame it all on an Aggie named Pinky Downs. A 1906 Texas A&M graduate, Downs was a member of the shcool’s board of regents from 1923 to 1933. He was the kind of Aggie who wore a maroon tie every day and who prodded the school into spending an extra $10,000 so that its new swimming pool would be longer than the one at the University of Texas. When the Aggies had a yell practice before the 1930 TCU game, Downs naturally was there. “What are we going to do the those Horned Frogs?” he shouted. His muse did not fail him. “Gig ‘em, Aggies!” he improvised, appropriating a term form frog hunting. For emphasis, he made a fist with his thumb extended straight up. The Southwest Conference had its first hand sign.

The primordial image of sticking frogs with a spear captured the essence of Aggieness—a good ol’ farm boy who was not so much unsophisticated as anti-sophisticated. When other schools later developed their own hand signs, the signals likewise started out as visual representations of school mascots. But they soon evolved into more. All those horns (long and frog), claws (bear and cougar), and the rest have become totems, symbols of belonging to a tribe. Or a sect: They are, to borrow a phrase from The Book of Common Prayer, “an outward and visible sign of an inward and spiritual grace.” In Texas it still matters what school you went to and who won the last game. That is why the Southwest Conference, defiled though its reputation may be, remains the best habitat for hand signals since charades. Of the nine SWC schools, more have hand signs (seven) than NCAA investigations (six). For that matter, one school, SMU, has more hand signs than football teams.

For a quarter of a century after Pinky Downs’s moment of inspiration, the Aggies had a monopoly on official gestures. But by 1955 archrival UT had fallen on hard times, made harder by a corresponding rise in the fortunes of A&M. A UT cheerleader named Harley Clark syllogized: (1) A&M has a hand sign, (2) A&M is winning, (3) UT has no hand sign, therefore (4) UT is losing. (Such reasoning prowess would later lead Clark, as an Austin judge in 1987, to conclude that the state’s system of financing public schools was unconstitutional.) At a pep rally before the TCU game, Clark held up his right hand in a peculiar way. The index and little fingers were sticking up, while the thumb held down the two interior digits—the head of a Longhorn, Clark said. The creation proved not to be the immediate answer to UT’s football plight, however, as signless TCU won the next day, 47-20.

Once A&M and UT had hand signs, everyone else wanted one. Even before 1955, SMU students had been raising their index and middle fingers in a generic V for victory. By the late fifties, Mustang rooters had changed the meaning to … pony ears. Baylor was next. In 1960 cheerleader Bobby Schrade came up with the idea of holding the hand aloft with all five fingers curved to suggest a bear claw. Only alcohol had a harder time getting accepted on the Baptist campus. For twelve years students and administrators argued whether the sign was sufficiently dignified before it was formally blessed in 1972.

When the University of Houston was seeking admission to the conference in 1972, cheerleaders decided that U of H needed a hand sign, too. The result—the UT sign with the middle finger added—officially represents a cougar claw; unofficially, it indicates the students’ attitude toward UT. At Texas Tech, members of a spirit organization called the Saddle Tramps decided in 1971 that the Red Raiders were getting left behind. Emulating Raider Red, the costumed mascot who discharges a brace of large pistols after each Tech score, the Saddle Tramps began brandishing thumb-and-forefinger pistols of their own. TCU cheerleaders began experimenting with hand signs in 1980 on the way to a cheerleading camp in Tennessee. To represent Horned Frogs, they first tried the UT sign with the outer fingers bent at the knuckles. No good: it could be seen as an admission that TCU was only half as good as UT. So they switched to bent index and middle fingers.

Even Rice students occasionally use a sign, but it is not pictured here because university officials, suspecting that a middle finger poked outward has a meaning other than “peck ‘em, Owls,” have declined to sanction it. Not surprisingly, the only conference school without a sign is Arkansas, whose adherents have a state all to themselves and thus have no need to proclaim in sign language that they Belong.