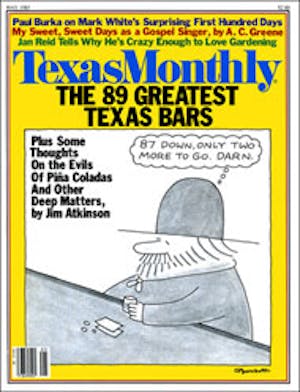 I was probably ten before I realized that the primary function of a water tower was to hold water. As the first thing a traveler spotted on the highway horizon, it took on a special significance, like a rustic Statue of Liberty alerting all comers that just ahead was civilization—or at least a Dairy Queen. The town name blazoned on the tank reflected, even in the dreariest little burgs, a certain pride of self; the iron legs braced against the earth seemed to symbolize the victory of man over West Texas. And the tower meant water, too—a commodity no native Texan can hold too dear—so its lofty perch was somehow only fitting.

The practical reason water towers are towers, though—particularly in dead-flat terrain like that of the Panhandle—is that they can use the pull of gravity to keep the mains full and the pressure high. Since every town has periods of peak demand for water, such as early in the morning when everyone wants to shower at once, the extra thousands of gallons in a water tower ensure that no one is left low and dry. Usually the tower is placed either in the middle of the peak-demand area (the center of town in most small towns) or opposite the municipal pumping station, with the heavy-use area in between. When demand slacks off, the station quickly pumps the tower full again in preparation for the next crunch.

The industry name for a water tower is “elevated tank.” The granddaddy of elevated-tank makers, and the company that has built by far the majority of Texas’ thousands of water towers, is Chicago Bridge & Iron. CBI began building water towers here in 1902, first using riveted steel and later welding the tanks. CBI’s Houston plant—temporarily shut down because of the recession—rolls steel for new towers in the state and directs a traveling team of workers who specialize in the risky business of erecting and painting the tanks. (High winds frequently cause them to settle claims for paint-spattered cars.) Water towers range from one hundred to three hundred feet tall, hold from fifteen thousand to three million gallons, and cost roughly $1 per gallon to build. Amazingly solid, they can withstand northers, dust storms, and even tornadoes. Most last a good fifty years; a city usually outgrows its water tower before the tower itself wears out.

CBI has built water towers in all shapes and sizes—a peach, a roll of toilet paper, a milk bottle, and the Earth, for example—but not in Texas. Texans take water too seriously to gaudy up their tanks. Today most Texas cities have water globes—rounded tanks perched on columns, like giant golf balls on tees, or huge many-legged ones that look like fat-bodied spiders. But the Texas classic is the small-town water tower that resembles the Tin Woodman’s head, cylindrical with a jaunty conical hat. The traditional colors are silver with black lettering. Occasionally a town picks the local school colors instead (Hutto’s is orange) or adds its slogan (“Amarillo: Tall in Texas”) or team name (“Elsa Yellow Jackets”), but most towns just use their names.

That’s the official paint job. Few water towers escape the yard-high graffiti scrawled across them by the bolder members of a recent graduating class (“We’re #1! Srs. ’82”) or the gutsier half of a smitten couple (“Duane Loves Sherry”). Nowadays most small towns fence in their towers to avoid the cost of repainting, as well as the risk to life and limb, that might result from a prom-night spree, and modern tanks have internal ladders and no catwalks, thus foiling stunt-minded city kids. But water towers don’t mean much to city kids, anyway. Water towers are a symbol of the prairie and the plains. Beer-aided and peer-abetted, country kids will readily tackle the hundred-foot climb, armed with only a can of spray paint. It’s a stupid action but an understandable one—a sort of rural Russian roulette. Because when you’re seventeen and trapped in the middle of nowhere, climbing a water tower isn’t just something to do; it’s a way of flouting the land and defying the sky.