Anthony Lloyd Carter, an innocent man, sits on death row in Texas State Prison in Huntsville, when someone claiming to be a federal agent offers him a deal: partake in an experimental government medical program, and instead of facing lethal injection Carter can live out his days in the mountains of Colorado.

It’s a no-brainer, right? Well, not so fast. In the post-apocalyptic world of The Passage (premiering January 14 on Fox), Project NOAH—the program carried out by a shadowy crew of renegade scientists—paves the way for the end of life on Earth as we know it. Following a deadly torn-from-headlines outbreak of bird flu, the hoped-for cure transforms test subjects into blood-sucking, telepathic ghouls who are fatally sensitive to sunlight.

“You keep calling them virals,” says FBI special agent Brad Wolgast (played by Mark-Paul Gosselaar) in the third episode. “But they drink blood and turn to dust in the sun. Why not call them vampires?”

“Because we’re scientists,” responds Dr. Jonas Lear, whose best friend has been infected by the virus. “There’s no such thing as vampires.”

That line directs a knowing wink at readers of author and Rice University professor Justin Cronin’s best-selling trilogy, which serves as the show’s source material. Back in 2010, when his first Passage novel published, he broke from the Twilight crowd by refusing to deem his very vampire-like creatures as the monsters du jour.

Even today, discussing the long and winding road that carried these characters from the page to the new, heavily publicized Fox series, Cronin does not take the matter lying down. “They are a little more vampire-y in the show than they were in the book, but really that’s about television,” Cronin tells the Texas Monthly. “In the book, any time somebody uses the term ‘vampire,’ it’s with an eye roll. ‘As if.’ And that was something of a guiding philosophy for me, because in literature, vampires are these gothic, romantic creatures. They come from Eastern European folktales. They’re magic! They don’t correspond to the biological or physical world.”

But for the show, Cronin admits, there was another crucial consideration. “My creatures are not even recognizably human, and actors don’t like that.”

In the earliest episodes of The Passage, the sci-fi vampires never fully overshadow the human drama that ensues. Wolgast’s misgivings about his shady assignment lead him to go AWOL. That leaves the brooding agent at odds with the mercenary thugs who have drawn the doomed Carter and other accused criminals into a clandestine program to try and save the world. It’s that kind of drama writer and executive producer Liz Heldens, well known for her role on the writing staff of the heralded small-town Texas drama Friday Night Lights, navigates with ease. In December, Heldens signed a three-year development deal, according to the Hollywood Reporter, “in the eight figure range.”

“It was important to us that however they look, that you can see the human being that was once there,” Heldens says. “The thesis statement, if you want to call it that, is no matter how bad the situation, there is redemption in human connections.”

In an echo of the ancient myths of shape-shifting vampires, The Passage indelibly altered Cronin’s career long before the show was a lock. When he arrived at Rice in 2003, at the age of 44, Cronin had authored two well-received books, a short story collection Mary and O’Neil (which secured him a PEN/Hemingway Award) and the novel The Summer Guest, but he remained far from a household name. From the get-go, however, The Passage emerged as a different sort of literary creature. In 2007, an early draft secured Cronin a three-book deal worth over $3.5 million with director and producer Ridley Scott (Blade Runner) snatching up film rights. When the series’ conclusion, The City of Mirrors, hit shelves in 2016, the king of horror Stephen King called the book “a thrilling finale to a trilogy that will stand as one of the great achievements in American fantasy fiction.”

In the books, which each run some 700 pages or more, Cronin employs an engaging hybrid of brainy and brawny prose that covers a century worth of action in The Passage trilogy. Cronin’s dystopian vision includes a Gulf of Mexico forever covered in an oily sheen, desiccated Las Vegas landmarks housing armies of viral creatures, and some moderate comic relief with a literary cameo by Jenna Bush as president. Against this backdrop, characters embarks on quests worthy of JRR Tolkien’s Lord of Rings, told with Cronin’s artful flourishes and daunting descriptions that occasionally echo the steely chords of Cormac McCarthy.

Cronin still teaches every other semester at Rice, but he and his family spend several months a year—including Houston’s sweltering summers—on Cape Cod, where they purchased a home soon after he sold The Passage and its screen rights. Since he finished writing the trilogy three years ago, the author has helped shepherd the first volume from the offices of Hollywood screenwriter John Logan (Gladiator, I Am Legend), a frequent Ridley Scott collaborator, to the television studios. Cronin picked up a production credit for the show, which wrapped shooting its first season last month.

Beyond recognizing that no actor could play the viral vampires as first envisioned, Cronin has had a crash course in the television business. The original pilot—already a departure from what’s found in his books—was retooled heavily by Heldens before the network bought the show. And though he acknowledges trilogy die-hards will lament how the TV people transformed his novels, Cronin is ready to defend those choices.

Indeed, last year social media gripes surfaced after Cronin posted pictures celebrating the casting of ten-year-old actress Saniyaa Sidney, who is black, as the young heroine Amy Bellafonte, upon whom the fate of humanity rests. In his novel, Cronin originally described Amy as a six-year-old white girl. Other characters have been redrawn, even eliminated from the narrative, and plenty of action rearranged. “It’s just a totally different medium that comes with a totally different toolbox, so we had to zig and zag a bit to get to the same place” he says. “To the readers who complain that the book has been changed, I like to point out the book is still there.”

The most notable shift in The Passage from page to screen is primarily in tone, at least through the first three episodes. The book features a hodgepodge of voices, found emails, shifting perspectives and diary entries to establish a believable chronicle of survivorship in a world already lost to scientific hubris and marked by environmental devastation. It’s haunting and mournful, taking place over many decades. The show smartly jettisons some of Cronin’s more literary flourishes, accentuating elements of humor and romance, finding a pace suited to prime time.

In the meantime, keen-eyed fans of network television will find plenty to sink their teeth into with The Passage’s Fox interpretation. The show has a pulpy vibe, and it’s easy to invest in the relationship between spunky young Sidney and glowering, paternal Gosselaar, whose action-hero moves may surprise viewers more familiar with the actor as Zack from Saved by the Bell. The show also drops a few horror and sci-fi Easter eggs: one character has a poster for the latter-day zombie flick 28 Days Later on her wall; and when we first encounter Sidney in the role of Amy, she totes a copy of A Wrinkle in Time—a classic of children’s literature which was remade earlier this year with a black actress in the central role of Meg (stirring consternation similar to Sidney’s casting).

“I actually came to this material as a fan of the books,” says Heldens. “I read City of Mirrors just as I found out that Fox had the property and it was available to make the TV show. So it was really exciting for me to actually get my hands on it.”

“At the end of the day, Justin Cronin set out to do a vampire show based in reality, you know, ‘what if vampires really existed?” she adds. “I just think it’s okay to say ‘vampire,’ and have a little bit of fun with that. Those little touches are fun.”

Provided enough people tune in to let the first season avoid an untimely demise, audiences will learn the fate of not just Amy and Wolgast, but the prisoner Carter and the patients, doctors, and mercenaries of Project NOAH. Without giving too much away, watchers in the Lone Star state may be disappointed to find that despite Cronin and Heldens strong Texas bona fides, filming so far has been entirely in Georgia, even the scenes set in Huntsville State Prison.

The Passage on Fox does take some time to find its rhythm. The sets and script don’t quite reach the highs of celebrated prestige projects from latter-day streaming services, but credit is due Heldens for finding appealing leads and setting up cliffhangers that suggest the end product will be a binge-worthy. And if some chunks of exposition fall flat, it’s worth keeping in mind that telepathic mutant bloodsuckers demand more explanation than the world of high-school football

“Friday Night Lights is like one of my top five shows of all time,” says Cronin, “When Liz’s name floated to the top of the list, I didn’t have any say in that, it was perhaps counterintuitive to some, but it was not counterintuitive to me. Friday Night Lights is not a show about football any more than The Passage is a novel about these, sort of, quasi vampires that I deployed in the book. In a sense, it’s a feature of setting, which gets your characters to move, and gives you dramatic set pieces. The best television now is really about people operating in a specific context or culture, and going into it very deeply to explore human behavior.”

And if the show is a flop? Cronin is already back at his writing desk with a fresh four-book contract with Random House, and getting ready to teach at Rice.

As they say in the business, stay tuned. 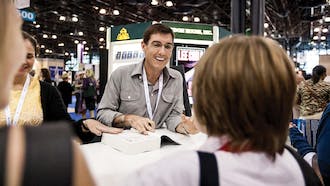 Interview With a Vampire Writer