Q: While driving around a friend’s ranch, my usually stoic buddy flipped down his visor and found that a red wasp had hitched a ride with us. All of a sudden he’s like Janis Joplin being electrocuted. When the dust settled, I had been stung on the forehead and my friend had his foot stuck behind the steering wheel. So, just how should a proper Texan handle himself in the presence of a small stinging insect? Also, what is the statute of limitations on razzing him about his behavior?
Name Withheld, Fort Worth

A: Unflinching stoicism in the face of terrifying obstacles is one of the most enduring characteristics of the mythic Texan. Think John Wayne at “the Alamo,” or Captains Call and McCrae out on the wild trail, where danger lurked behind every sage bush; or the Texanist’s plucky missus after the Texanist, while out on the town, has pushed the boundaries of his Mexican martini consumption well past the point of public acceptability. As you see, the taming of this harsh land we call home often involved scrapes with dangerous and unsavory characters, and indeed, it still does. The red wasp is included among such risks, along with hornets, yellow jackets, bees, horseflies, and Mexican martinis. But while these red menaces of the porch eaves—known officially and somewhat less ominously as paper wasps—will typically attack only when they feel that their nest is in danger, the mere threat of the mighty(ish) wallop that is their sting is enough to send most folks into a state of discomposure, and then, depending on the closeness of the encounter, possibly into the spasmodic throes of a full-blown conniption fit, like the one you witnessed your friend have in the cab of the truck that day. His reaction, though, while perhaps a smidge melodramatic, was not really all that unusual for the circumstance. In fact, it is precisely this sort of wild thrashing and high-pitched childlike screaming that has kept many a Texan from getting stung by red wasps, which, if the Texanist recalls correctly, is exactly the opposite of what happened to you, on your forehead, as you calmly sat there like a slack-jawed lump on a log. As for an expiration date on ridiculing your friend, the Texanist advises caution in stirring this proverbial hornet’s nest. The chance of suffering another welt on the forehead does exist.

Q: My thirteen-year-old son went to stay with my parents in Arkansas for a week earlier this summer, and my father “introduced” him to dipping tobacco. I really let my dad have it, but he still sees nothing wrong with what he did. Can you please help me explain to him the error of his country-boy ways?
Ellen P., Abilene

A: Tales of intergenerational familial bonding always put a smile on the Texanist’s face. And the benefits of such occasions, as studies have shown, are many. Times like these are best spent endeavoring in a sort of apprenticeship of fun pastimes and useful skills, such as proper rock-skipping and stick-whittling techniques. Under your own father’s tutelage, your son would be fortunate to learn how to tie a good honda knot, drive an old truck, or bait a hook. He could even gain an appreciation for the wonders of the natural world from your dad, with lessons that might range from scat identification to the birds and the bees—perhaps via colorful stories from his time in the service. These are the sorts of things a young man won’t learn playing games on a smartphone or hanging at the mall. There are certain bits of time-tested knowledge that should be bequeathed by experienced old-timers to their grandchildren, but over the decades, dipping snuff, which was once thought of as harmless and enjoyable, has been reclassified as a bad and unsafe habit. Your father was in the wrong on this one, and you were right to admonish him. Besides, making poor choices is something a young man needs to learn to do on his own, and the boy’s granddad really ought to have known this.

Q: Can I run the red light in my one-stoplight town if it’s late at night and nobody’s around? Sitting there until the light changes seems a little silly.
Name Withheld

A: The Texanist cannot advocate for lawbreaking, but at the same time he is an ardent booster of common sense. The stoplight was installed with safety and the orderly flow of traffic in mind, and both of these objectives are nullified when you are the sole citizen out motoring about your tiny town. So while the Texanist is legally barred from green-lighting the running of red lights, he will stop short of doing that and just point out that since towns of this size are usually sparse on patrol officers, the only real consequence to consider has to do with the clearness of your own conscience. The Texanist advises putting your good judgment in gear and proceeding (wink) with caution.

Q: I was out with some friends and our kids on a hike near Waco when one of the mothers applied bug spray extra thoroughly to herself and her family, including to her kids’ chonies. It seemed a little over the top, but the rest of us got horrible bites. And then, while visiting another friend’s creek-side property in Wimberley, we were told to spray down while our host mumbled something about the chiggers this year. Are the chiggers worse this year because of all the rain? I don’t remember it being so extreme as a kid. Could you tell us more about chiggers and how best to handle them?
Ledia Carroll, Austin

A: First red wasps and now chiggers? Did somebody change the wording on the Texanist’s shingle so that it now reads “Fine Entomological Advice Since 2007”? Regardless, your note doesn’t bug the Texanist in the least, and actually, he is happy that you want to learn more about these pernicious pests, as most of the chigger-related mail he receives is concerned only with bite relief. A chigger, it turns out, is the parasitic larval stage of a common mite. And you’ll be interested to know, as the Texanist was, that according to actual experts, in this case the good folks at Texas A&M Agrilife Extension Service and a book, The Field Guide to Common Texas Insects, the bite isn’t really a bite in the classic sense. Rather, the larva “injects a digestive fluid that disintegrates the skin cells and forms a feeding tube (stylastome) into the skin,” which then “swells around the chigger, making the chigger appear to be burrowing into the skin.” Further, the intense itching is caused by that “injection of digestive enzymes,” which, they say, may last for several days after the chigger has had its fill and dislodged itself. (Speaking of having one’s fill and one’s subsequent dislodgement, these feeding tactics, as horrifying as they are, remind the Texanist of the time he inadvertently mistook the Big Bar-B-Q Sampler at Underwood’s Cafeteria, in Brownwood, as an entrée item for an individual rather than a meal intended for the purpose of satisfying a family of six.) This year’s chiggers have indeed benefited from the abundant late-spring and early-summer rains, and this is why you’ve witnessed more of your friends dousing with bug spray. The experts recommend using one that contains DEET, the active ingredient in repellents that will actually repel the likes of a chigger.

The Texanist’s Little-Known Fact of the Month: Everybody remembers the sensation that was the Houston Oilers’ “Luv Ya Blue” period, but few know that the movement was born on November 20, 1978, as the team, led by rookie Earl Campbell’s 4-touchdown, 199-yard steamroll, bested the Miami Dolphins 35–30 in the Astrodome during a Monday Night Football game and the 50,290 pompom-shaking fans in attendance—and legions more watching at home—fell wildly in luv with their team.

So What’s the Truth About Dan Morales and Tobacco? 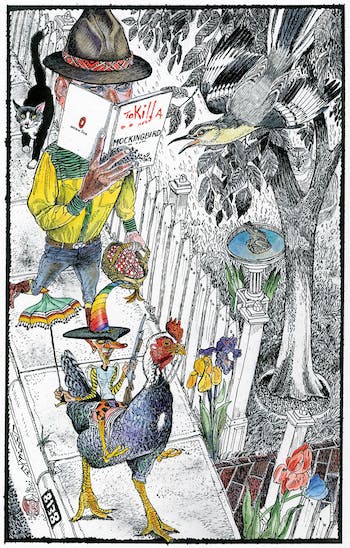 So What’s the Truth About Dan Morales and Tobacco? 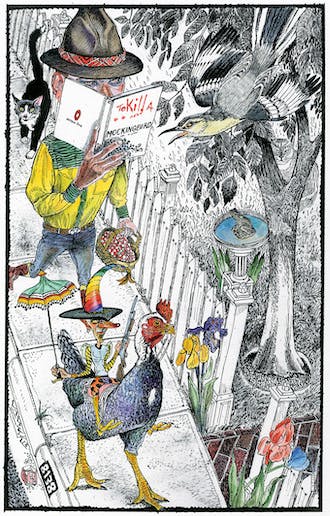