“Again, I’d—that would be bad. And I would have to consider it.”

—State Representative Blake Farenthold to MSNBC’s Chris Hayes, according to the Dallas Morning News. The Corpus Christi politician was responding to Hayes’s question about whether Farenthold would continue to support Donald Trump if a tape came out in which Trump was recorded saying, “I really like to rape women.” The hypothetical scenario was apparently not an automatic deal-breaker for Farenthold. He later apologized for saying he might still back a presidential candidate who would theoretically admit such a thing. 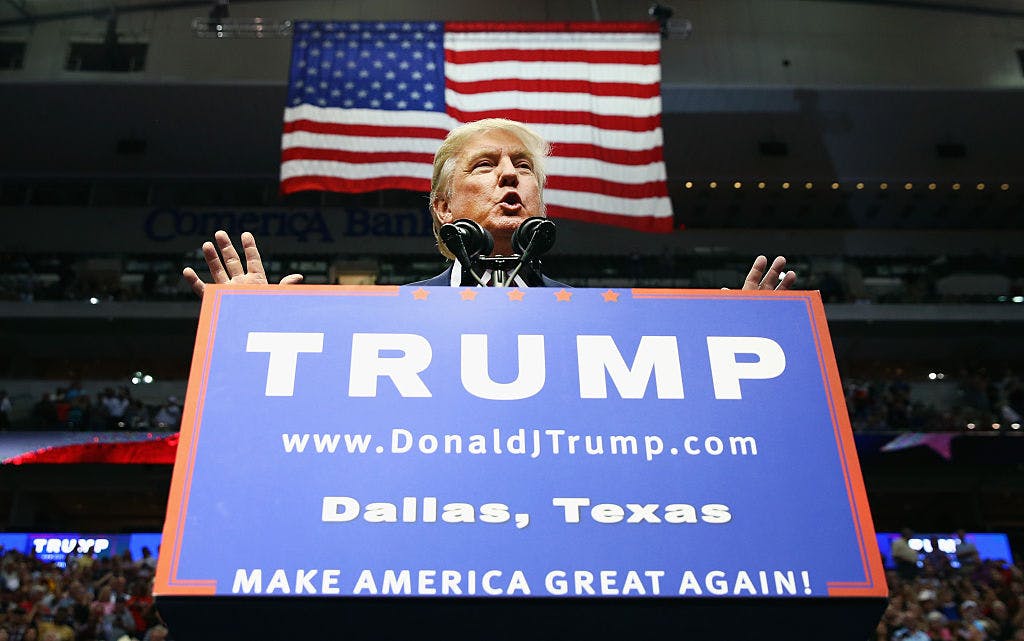 Texas Trumped
Donald Trump returned to Texas yet again, this time to attend fundraising events in San Antonio and Dallas. As to be expected whenever the Republican presidential candidate appears in public, a few of his comments here made headlines everywhere. In San Antonio, Trump attacked his own party and turned on U.S. House Speaker Paul Ryan in particular, accusing him of having “total disloyalty to the party,” according to the Texas Tribune. And in Dallas later on Tuesday, Trump proclaimed to donors that the loss of support from a handful of Republican leaders after the release of a tape recording of him bragging about sexual assault in 2005 allowed him to escape the “shackles” of the GOP, according to the Dallas Morning News. Although he was met by protesters in San Antonio, his lewd comments didn’t seem to have much of an impact on his donors or other supporters who came out during Trump’s latest Texas swing. Lieutenant Governor Dan Patrick posted on Facebook that Trump had raised a cool $5 million by the end of the day. U.S. Representative Michael Burgess, from Lewisville, who attended Trump’s fundraising events in Dallas, told the Morning News that the Trump tape wasn’t important. “We’re not electing a choirboy,” Burgess said. “We’re electing a president to solve problems.” More than a dozen San Antonio police officers who escorted Trump’s motorcade to and from the airport apparently also weren’t worried about the candidate’s decade-old remarks. The officers wore red “Make America Great Again” hats to support Trump. According to the San Antonio Express-News, it’s a violation of city policy for cops to participate in political activity like that while on duty.

SCOTUS Shooting Case
The U.S. Supreme Court will hear a case about a fifteen-year-old Mexican boy who was shot and killed by a U.S. Border Patrol agent in 2010. According to the El Paso Times, the court will examine whether the boy’s family in Mexico can sue the U.S. federal government and the agent who killed their son. The agent, Jose Mesa Jr., was firing his weapon from the U.S. side of the border near El Paso over to the Mexican side near Juárez, where the boy was struck by the bullet and killed. Border Patrol has maintained that the unarmed teen’s shooting was justified because he was throwing rocks at the agent, but witnesses dispute that claim and say his death was the result of an unnecessary use of lethal force. Before SCOTUS agreed to take their latest appeal, the family’s lawsuit had previously been halted by two lower courts who ruled that that they couldn’t sue because the boy was both a Mexican national and on the Mexican side of the border when he was shot.

Balmorhea Blues
Residents and nature-lovers were understandably concerned about the fate of the beloved Balmorhea springs after Apache Corp. announced a major oil discovery surrounding the site in September, but they were immediately assured that the springs would be unaffected: Apache said it wouldn’t drill in the state park, and officials from the Texas Parks and Wildlife Department said there was “no evidence to indicate concern.” As the Houston Chronicle reported on Tuesday, however, the state’s confident reassurance was apparently just a clever way of saying that they don’t have any research on the subject whatsoever. The Parks Department was suspiciously mum about the topic after making that statement in September, so the Chronicle went ahead and forced the agency’s hand by filing an open records request to see their research into the effects of oil and gas drilling on Balmorhea. The department responded by saying that they had no such research to show. Apparently they’re working on it now, though. “We are ramping up efforts to gather information,” a department spokesman told the Chronicle. Better late than never?

Grave Matters
President George W. Bush and his wife Laura chose a burial site on Tuesday, deciding that they’d like to spend all of eternity peacefully resting in Austin’s Texas State Cemetery, according to the Austin American-Statesman. There was really no doubt the Bushes would be “Texas forever,” but there were a few other options the Bushes could have picked, like being entombed at his library at Southern Methodist University in Dallas, or at his ranch in Midland or his ranch outside Austin, or even in the Arlington National Cemetery, though the Statesman astutely pointed out that Arlington is probably “too Washington” for Bush. Every deceased president since John F. Kennedy—except Lyndon Johnson, who’s buried at his Texas ranch—is resting at their own presidential libraries. By bucking the library trend, Bush will also become the first president buried at the Texas State Cemetery. “They never want to leave the home state they love,” family spokesman Freddy Ford told the Statesman. “President Bush would just like to point out one thing: This doesn’t mean he already has one foot in the grave.”

South Texas was once home to “bear dogs”? Science Magazine