On March 12, the tyranny of daylight saving time begins anew. Clocks across the country will “spring forward” an hour for the summer months (defined now as “mid-March to early November”), causing Americans to lose an hour of sleep. The only hope lies in anticipation of November 5, when that hour returns. There are benefits, of course, for the common Texan—it means extended daylight hours during generally pleasant to be outside. But ask a farmer: daylight saving time is a nuisance.

Or you can ask State Representative Jason Isaac or state Senator Jose Menendez, who’ve filed bills in both chambers of the legislature that would end the practice of springing forward every March throughout the state of Texas. “There’s really no good reason why we should spring our clocks forward an hour,” Isaac told KXAN, sagely noting that “it doesn’t change the amount of daylight, it doesn’t change the amount of daytime, it just leaves us at the same time.”

That is true. The practice of setting our clocks forward is an illusion, a reminder of the fact that ultimately our understanding of time is similarly illusory, and any attempts to master it are, in the end, futile gestures that do nothing to slow the inexorable march toward death that begins for all of us from the moment we first draw breath. Time, as Representative Isaac or Matthew McConaughey might say, is a flat circle.

Ending the practice of seasonally adjusting our clocks has its appeal. Isaac and Menendez both note that traffic accidents go up the week after the switch, as tired motorists who miss that hour of sleep are more prone to collision. Also, farmers and others whose work depends on rising early really do hate it.

However—and this is a big “however”—for the state of Texas to opt out of daylight saving time carries with it its own burdens, and they’re not insubstantial. Choosing not to participate means that Texas would occupy a nebulous time zone status compared to the rest of the U.S. Most of the state sits in the Central Time Zone, so when it’s six in the evening in Dallas, it’s seven in the evening in New York. If Texas opts out of daylight saving time, though, then that’ll be true in the winter, but as New York springs ahead, the bulk of the state will by default fall back to Mountain Time. (“What’s the big deal?” El Pasoans and other West Texans who live in Mountain Time year-round, might say—but they’ll end up syncing up with California for eight months of the year.)

Practically speaking, it means that for the first half of the NFL season, the Cowboys and the Texans daytime games would kick off at noon, while for the second half, it’d happen at eleven in the morning. If you work remotely from El Paso, your conference calls at nine in the morning in New York will start at six a.m. instead of seven.

That may seem like a small price to pay—sure, your favorite shows come on an hour later after one crazy Sunday goes by, and you have to track time zones when making calls to friends who don’t enjoy the good fortune of calling Texas home—but at least you don’t have to adjust your watch twice a year. But Indiana was a holdout on daylight saving time for years—and in 2005, gubernatorial candidate Mitch Daniels ran a successful campaign for office on a platform that included bringing the state to modernity by embracing the time change. Reports from the state at the time are wild, as people are shocked and confused by the notion that they’d have to start changing their clocks. Daniels, attempting to quell concerns once in office, told his constituents that “nothing will ever be more confusing than the world we’re leaving behind,” while Hoosiers behaved like the town hall meetings on Parks & Recreation were a documentary. The Indianapolis Star published panicked essays in the days that followed the switch lamenting the complexity of living the way that the rest of America lives.

Hawaii—isolated from the rest of the U.S. by more than just how often it changes its clocks—is among the two states that still holds out against daylight saving time. Arizona, also famously stubborn in how it chooses to interact with the rest of the country, is the only other holdout. And while it’s a part of the state’s stubborn identity, the holdout is controversial there, as well.

The goal of ending daylight saving time might well be noble, even if the debate about whether to side with the eight months a year in which it occurs, or to hold the four months of “standard” time as the default would almost certainly prove contentious. But checking out of it as an outlier state brings with it a lot of headaches that nobody’s going to enjoy. If Isaac and Menendez want the practice to end, they should probably start lobbying their counterparts in the U.S. Congress to push toward a uniform ending. Otherwise, things are gonna get pretty confusing here in Texas. 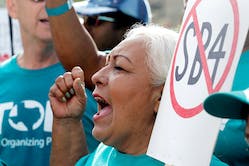 As Senate Bill 4 is Halted, Opponents of the Sanctuary City Law Celebrate

Two U.S. Senators Urged SXSW to Move Out of Texas to Protest SB 4