On a sunny early March afternoon, Beaumont artist Kimberly Brown put the final touches on her latest public artwork: a mural at Pour Brothers Brewery, a popular downtown drinking spot and home to Beaumont’s Boomtown Market, a monthly gathering of local artisans and vendors. Despite delays due to the February ice storm, Brown wrapped up the project in time for the city’s third annual restaurant week, which was set to culminate with the March 14 market. Coming on the heels of the devastating winter storm and another week of rain in southeast Texas, the painting project turned into a sort of spontaneous celebration as locals gathered to watch Brown work. “Tons of people stopped by—other artists, friends, our local candidate for mayor, an old grade-school teacher,” said Brown, who grew up in Beaumont. The moment seemed to sum up the purpose of public art—to connect with people as they go about their daily lives. One of the best parts, Brown added: “I got to try a few new beers I’d never had, for free!”

For the past several years, Beaumont, the sleepy southeast Texas city of roughly 120,000 people near the Louisiana border, has been quietly boosting its public art scene, while also striving to remain an affordable place for artists to live and work. “We thought we would kick off a mural project to support our local artists,” said Dean Conwell, the executive director of the Beaumont Convention and Visitors Bureau, who said he was inspired by public art in Houston and New Orleans and wanted to bring some of the same energy to his city. Plus, he added, “the architecture of downtown Beaumont is incredible. There are a lot of older buildings we wanted to dress up.”

Since its inception in 2017, the Downtown Mural Project has brought about a dozen murals to the city, mostly in the historic downtown area. When the project began, local artists were invited to submit proposals, and business owners who were open to having murals painted on their buildings were paired with artists—all of it funded by the visitors bureau. Greg Busceme, executive director of Beaumont’s nonprofit The Art Studio Inc., helped out in the early stages, connecting artists like Brown with available downtown walls. Along with her Pour Brothers mural, Brown created three of the program’s most visible murals: a stunning portrait of Frida Kahlo, a retro tribute to the Pig Stand diner, and the eye-catchingly abstract Geometric Beaumont, a much-photographed mural that was removed when 1701 Barbecue bought the empty building it was painted on late last year. (The new owners hired Brown to repurpose the old mural to incorporate the restaurant’s name, and to paint other murals and signage.)

The owners of 1701 weren’t the first to hire a local artist to jazz up their restaurant: Ines Alvidres, another Beaumont artist whose “friendly abstract” style has made her something of a local celebrity, was hired by both Tacos La Bamba and Crazy Cajun to paint murals on their walls. That idea caught on with other restaurants and artists, and the visitors bureau incorporated the project into an Instagram campaign called #eatbmt to raise awareness of Beaumont’s dining scene and promote its restaurant week. The community response has been positive and the project is still going strong, even during the pandemic. “The murals have kind of served as an economic development driver,” said Jes Prince, president of the Downtown Beaumont Cultural Arts District’s (DBCAD) board of directors. “With so few things to do inside, people are coming downtown to see them . . . and they hopefully end up spending money.” The murals also likely helped DBCAD get formal recognition in 2019 as a cultural district from the Texas Commission on the Arts, a distinction that gives the city’s museums and artists a higher profile and opens the doors for state grant money. “We got a bunch of artists on the walls and money in their pockets, and that’s a good thing,” said Busceme. Conwell told me that the visitors bureau hopes to add five or six new murals to the Beaumont landscape each year.

Though it often flies under the radar, southeast Texas has a long tradition of producing acclaimed artists: renowned sculptor David Cargill and photographer Keith Carter both live in Beaumont, and abstract painter Robert Rauschenberg was born in Port Arthur. The Dishman Art Museum at Lamar University and the Art Museum of Southeast Texas have strong collections rivaling those of wealthier institutions in bigger cities, but Beaumont isn’t often thought of as a center for the arts. Locals want to change that tired perception. “According to the rest of the world, we’re just refineries and oil gushers,” Brown told me.

Prince, who’s lived in Beaumont all her life, is excited about the murals, and about an in-the-works project with Artspace, a nonprofit that builds affordable live-work spaces for artists, with extra units for non-artist residents. If all goes according to plan, a new building will be constructed in downtown Beaumont’s cultural arts district in the next few years. With Beaumont’s proximity to Lamar University and the city’s median age of 34, Prince feels confident people will be willing to move back downtown. “I’d live there,” she told me over the phone, having just finished a lunch meeting at Stir It Up Bistro, a soul-food cafe with a photogenic mural diners can see while they sit on the outdoor patio. As we chatted, Prince texted me photos of the mural and of the smoked turkey leg and mac ‘n’ cheese she’d had for lunch. “Do you want to see more?” she asked. “My dream job is walking around downtown taking photos.” Her enthusiasm was contagious, and I answered with an emphatic yes.

Where to See Beaumont’s Murals

The city’s compact, architecturally rich downtown and its murals are easily seen on foot (or by bike). Beau Cycles, a downtown bike share, is set to launch this spring. With COVID-19 still a threat, it’s best to check with local businesses to confirm hours and individual pandemic protocols before you go, but most of the murals listed are outdoors. Here’s a guide to where you can see public art (in downtown and beyond) and grab a bite or a beer to take home or enjoy outside. 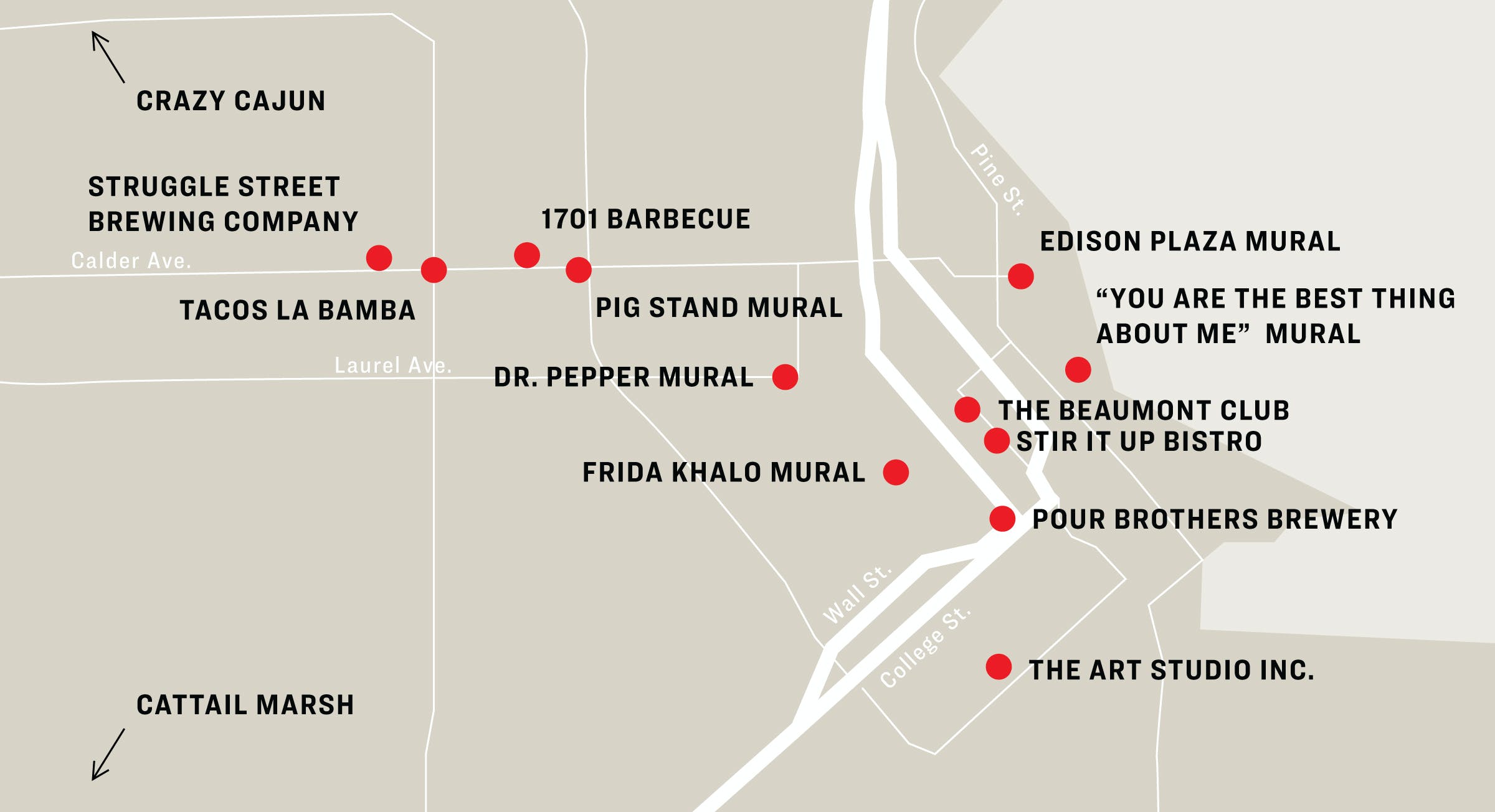 More than seventy vibrantly painted traffic boxes are scattered around town—many of them within a walkable distance. One of the first outreach efforts in the city’s public art campaign, this ongoing project is open to professional artists (Ines Alvidres and Kimberly Brown have painted some) as well as amateurs.

Murals and graffiti by various artists cover the walls of two industrial buildings that make up this arts nonprofit. Cofounded by Greg Busceme in 1983 to support the local arts community, the studio offers work spaces, classes, a gallery, and a pottery studio.

Chris Presley’s “Bourgeois Bayou” mural on the exterior of The Beaumont Club celebrates great blue herons as well as the art deco history of the building, which opened in 1921. With its location on both the Central and Mississippi Flyways, the Beaumont area is home (for at least part of the year) to hundreds of species of migratory birds, making them a favorite subject for local artists.

This sprawling, scenic wetland preserve has walking trails and boardwalks for birdwatching and spotting the resident alligator. It’s also rich in public art. Pick up lunch to enjoy on one of Ines Alvidres’s painted picnic tables, or sign up for a Saturday-morning outdoor yoga class. Be sure to check out Kimberly Brown’s mural of birds and cattails on the pump house on the way into the preserve.

Enjoy a po’boy or a crawfish boil (in season) on the patio of this local favorite, and check out Alvidres’s mural of a larger-than-life crawfish playing an accordion—a cheeky nod to Beaumont’s Cajun heritage.

With work set to begin sometime this spring, Kimberly Brown’s next mural will be a nostalgic tribute to Texas’s favorite cola—with Beaumont landmarks such as the Neches River lift bridge forming the backdrop.

Alvidres recently graced Beaumont’s tallest building, the seventeen-story Edison Plaza, with one of her favorite creatures—a majestic great blue heron. The ten-foot-tall bird (named Divina) is inside the Current cafe, but you can see it when you order at the counter. Outside seating is available.

Three Instagrammable murals cover the outside of this mid-century brick warehouse: Brown’s gorgeous Frida Kahlo is the highlight, but a sensuous mermaid by Micky Mitchell and Betty Smith’s whimsical-yet-detailed dragonfly are also delightful crowd pleasers.

Brown’s homage to the Pig Stand No. 41 barbecue drive-in, a Beaumont hotspot for 65 years, was painted in 2018 on the side of the convenience store that replaced the iconic round building. Brown, who grew up going to the Pig Stand, told me that the painting has prompted many residents to share their own memories of the beloved diner. This one is probably the most popular mural in town.

Grab a table in the large biergarten of Beaumont’s first craft brewery and try a Gladys City Black Gold Anniversary stout, named in honor of the Spindletop oil gusher (just four miles from the brewery), which celebrates its 120th birthday this year.

Brown’s mural, which she describes as a “flowchart of the brewing process, with a Beaumont backdrop,” is on the other side of the wall from the biergarten, next to where Boomtown Market is held. This family-friendly, dog-friendly gathering of local artisans started in 2020 and takes place the second Sunday of every month. The next event is planned for April 11.

Brown painted the blue Zavala Texas flag and a striking black-and-white sign over what was originally her Geometric Beaumont mural for this Central Texas–influenced barbecue place, housed in a former 1940s service station. 1701 cooks only on live fire and serves 44 Farms brisket and ribs (and house-made sides) from 11 a.m. till 2 p.m. (or until sold out). Outdoor seating available.

Stir It Up Bistro

Before this popular Old Town craft brewery opened in 2019, the owners had artist Kaitlyn King paint an inside mural of their logo and golden barley hops against a simple black background. Try one of the constantly rotating flavors, like Elvis Has Left the Building (a peanut-butter-and-banana stout), on the expansive patio.

Alvidres’s striking Mexico Lindo y Querido mural brightens the inside of this popular video store turned taqueria in Old Town, part of the #eatbmt campaign. Grab some quesabirria tacos to go, or find a table on the patio.

“You Are the Best Thing About Me”  Mural

Painted on the side of the civic center and directly next to the entrance to the Beaumont Children’s Museum, this punchy mural, painted by Summer Lydick, was among the first of the downtown murals. Inspired by U2 lyrics, it was created as a place for visitors and residents to snap photos and to promote Beaumont as a tourist destination.