Politics aside, no presidential candidate has ever presented a stranger (and demonstrably false) “personal belief” than Ben Carson’s theory about the pyramids being a grain silo for the biblical Joseph. The memes about his grand ideas have been floating around and, as should be expected, they finally got a Texas tinge to them. 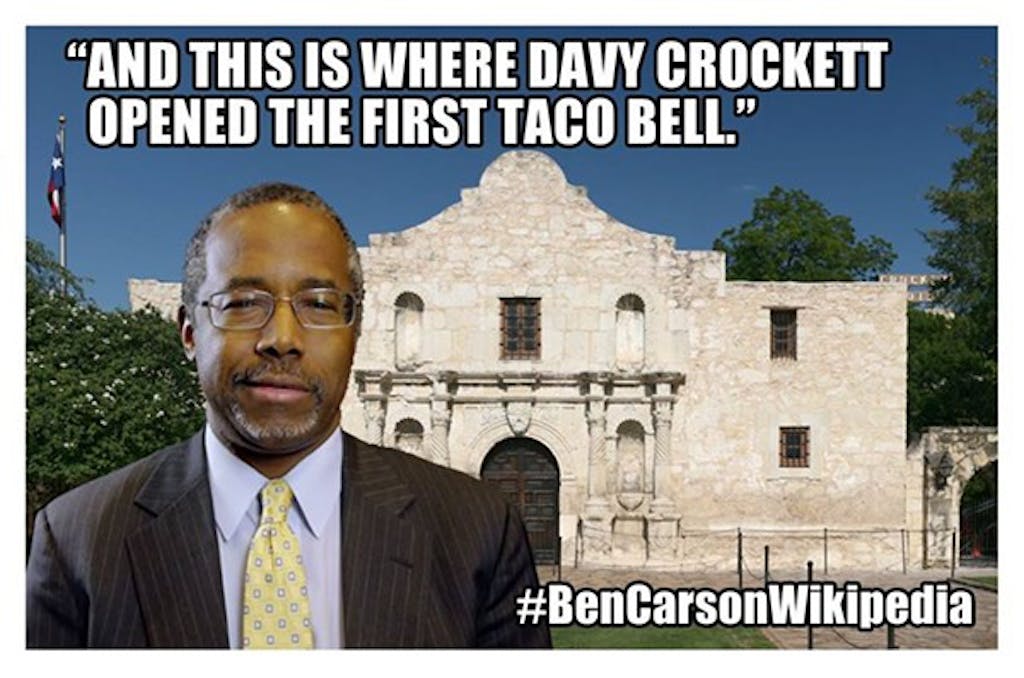 Jaywalking — Keep watch on this story because it’s starting to garner serious attention. On Friday, more than a dozen Austin police swooped in to arrest three people. The crime, according to the affidavit? Jaywalking. In the city’s party district. The incident was captured on camera and it’s uncomfortable to watch, to say the least. Now, one of the men who was arrested, Matthew Wallace, has announced that he will challenge the charge. The arrest affidavit “is accurate,” he told the Austin American-Statesman. “However, ‘I think the video evidence explains it much better than the affidavit does,'” he said. Apart from the jaywalking charge, Wallace was also charged with resisting arrest, which Wallace disputes, arguing that he was compliant with the officer. Wallace seems to be taking the arrest in stride, saying the jaywalking “was worthy of a ticket,” but that “the night should’ve been no more than us being put up against the wall, and me being bummed out that I got a ticket downtown on Sixth Street. … We should’ve walked away with no more than a ticket, maybe some sass from cops. Not sore and in jail.”

Seeking Judgement — It sounds like something out of a movie, but authorities are serious about finding out who attempted to assassinate a federal judge. As Fox News explains, “State Judge Julie Kocurek was shot and wounded late Friday as she returned to her home in an upscale area of Austin. She was last listed in stable condition at an Austin hospital with injuries that are not believed to be life-threatening.” Since the shooting, authorities have detained a “person of interest” who has “some sort of connection” with Kocurek, according to CNN. “The incident is sending shock waves through the law enforcement community,” writes CBS News. “‘In my 30 years with the U.S. Marshals Service this is the first instance in my career where a member of the judiciary was attacked,’ said Hector Gomez, supervisory deputy with the U.S. Marshals. ‘That is something that is very uneasy, unsettling to me.'” Kocurek has been involved in some high-profile political cases over the years, including ones dealing with U.S. House Majority Leader Tom DeLay and Rick Perry.

Stocking Up — They might not like guns, but that doesn’t mean a bunch of professors aren’t going to return fire. In anticipation for next year’s law allowing guns on campus, an anti-gun group is stocking up on legal ammo, namely lawyers. “The group of faculty, staff and students known as Gun Free UT has retained the help of the National Lawyers Guild, and said it will ‘evaluate its legal options’ once President Greg Fenves issues his guidelines to the system, which will happen early next year,” according to the Houston Chronicle. “The group has previously said it would be open to suing the university if its leaders did not take their concerns over the new law seriously. Joan Neuberger, a history professor and one of Gun Free UT’s other de facto leaders, in October said, ‘We would like to challenge the law in court on the basis of its infringement of our rights.'” The group is holding a rally on campus Tuesday, though based on the description, it doesn’t sound nearly as interesting as the sex toy-filled #CocksNotGlocks rally planned for next year.

Star Wars Fan Who Got His Dying Wish Goes to That Galaxy Far, Far Away

The Kind of Cat House No One Wants to Visit

How Far Will UT Students Go To Keep the Campus Gun Free?