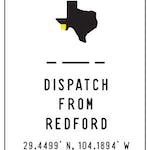 This hilltop in Redford is a humble place to die. Bees nuzzle the globe mallow in bloom. Broken beer bottles and busted bedsprings neighbor the creosote. Abandoned tires recline in the gravel. A cock crows, a goat bleats. A few hundred yards away, tucked out of sight by the salt cedar along its banks, the Rio Grande lazes past, green and slow moving.

Esequiel Hernández Jr. died here twenty years ago, splayed across the top of an old, disused well. He was killed May 20, 1997, by a member of a four-person team of Marines that was in the area on a secret counter-drug mission in conjunction with the Border Patrol. A high school sophomore, he’d taken his goats to graze on the scrappy hillsides by his house that afternoon after school, armed with an antique .22 plinking rifle as a defense against dogs that might bother the herd. When he popped off a round or two, the Marine team some two hundred yards away believed they were the intended targets. In actuality, Esequiel did not realize that the four Marines were even out there, heavily camouflaged in ghillie suits and hunkered with M16s against the desert floor. None of Redford’s residents, in fact, knew that Marines were camped among them, hiding by day in holes and by night monitoring their movements and calling in suspicious river crossings and activities to the Border Patrol. The Marines had been told that many of the people they’d see were affiliated with the drug trade and potentially dangerous. The staff sergeant who’d briefed them before they deployed had noted that Redford, a hamlet of about one hundred people, was “not a friendly town.” A pre-mission memo cautioned that drug smugglers were an organized enemy, capable of personal threat. “These gangs are extremely dangerous and will also use force,” it read. “These situations make operations dangerous for the unprepared.”

The soldiers stalked Esequiel for twenty minutes while he meandered toward home with the goats. The Marines did not announce their presence. And when one Marine thought he saw Esequiel pause and take a bead on them, he fired.

It was all a terrible mistake. Esequiel was no drug dealer, no killer. The angle of the wound he received indicated that he had not aimed his weapon at the team. The majority of people in Redford were neither hostile nor engaged in the drug trade. A third of the tiny burg’s population were children. He was a boy who liked horses and goats and his folkloric dance class at school. He was a kid who’d just turned eighteen years old.

I don’t pass through Redford often, but when I do, I always visit the well where he died. A scrolled white cross is placed at the well and bears his name hand-painted in black. From this vantage point, you can see the church where his funeral was held, his family’s house, and, on a rise a quarter mile away, the cemetery where he now lies. How is it possible that the scope of one’s life can be summarized in a single vista? Farmers’ green fields in Mexico stretch prettily toward Mexican mountains. The wild Big Bend landscape toes the edge of Redford. How could a world so vast and open become distilled to a few hundred yards on either side of this gravel hilltop?

The river has shallow spots at Redford, and consequently people have lived here and crossed the river in this area for the past eight hundred years or more. For most of that very long span of time, the river and even the political boundary it came to represent hardly hindered those who waded over to graze horses, work crops, visit a grandmother, or buy a few groceries. Boulders were placed at the crossing in 2001, as a response to 9/11, and thus the flow of people who drifted easily from one side to another for untold generations pretty well ceased.

The Rio Grande crossing at Redford is called El Polvo. Not far from the river, an American flag stirs in the breeze above a rooftop near the Hernández family compound. Another flag is affixed to the cross that marks where Esequiel died. Still another is wired to the gate of the Redford Cemetery, where he is buried. Here, just a matter of feet from the river that defines the reach of our country and its laws, sensibilities, flaws, and strengths, and despite the unjust and brutal act they have had to endure, the residents of Redford proclaim their Americanness. Three flags within a few hundred yards of each other. Maybe they’re displayed as a symbol of pride. Maybe they fly as a show of identity: This is America. On this side, we are Americans. Or maybe the presence of the flags is more like someone who holds up his hands to the police as an act of supplication or surrender: I pose no danger. I’m not a threat. Don’t shoot. Don’t shoot.

Earlier this spring, I sat in a windowless room in El Paso, holding a tiny American flag and thinking of Esequiel. Our son, Huck, who is now fifteen, was born in Guatemala. His international adoption required an impressive amount of vetting, DNA testing, and lots of paperwork filed in triplicate with fancy gold seals. We brought him home to Texas when he was six months old. He became a United States citizen at the time of his adoption, but we carefully went through extra measures to ensure that the adoption and his citizenship were solid in every respect. We had the district court formally recognize the adoption and his name change; we got Huck a Social Security card and made sure Social Security categorized him as a citizen and not an alien; we ordered a Texas birth certificate and secured a passport.

Last summer, however, unsettled by some of the anti-immigrant mumblings nationally, I was moved to do a final step. While the passport is an indication of citizenship, it expires and has to be renewed. In the event he someday might have to prove his citizenship and we’re not around to help with that, I sent a pile of paperwork and $550 to the Department of Homeland Security for a Certificate of Citizenship. The COC is the citizenship gold standard. It never expires; it’s irrefutable proof that the U.S. is one’s homeland.

Six months after we applied, a letter arrived that called for Huck to be present at a DHS appointment in El Paso, three hours from our home, in Marfa. We had thought that the certificate would simply arrive in the mail one day, like a passport, but the summons had a specific date and time, so we went. Our first indication that this was not a solo appointment was the number of people in the parking lot smoothing the hair of small children and tucking shirts into waistbands.

Inside, the current of energy was like a graduation. This, it turns out, was a full-on oath of citizenship ceremony, and Huck, although already an American, gamely took his seat among twenty others who were about to become Americans too: a grandmotherly type clutching a hanky; a first-grade girl in a flounced dress; several thirty-something women; a handsome soldier in his dress blues whose supporters, also in their dress blues, sat joshing toward the back. The room was pleasantly jammed with family and friends, a rainbow of ethnicities. America, the beautiful.

A DHS staffer dimmed the lights and started a video on a television screen. Against a score of stirring music, the video showed images of people in native costumes, the new Freedom Tower, old black and white photos of immigrants excitedly peering over the rails of ships. The lights came up, and after a short speech and the Pledge of Allegiance, the immigrants raised their right hands for the administration of the oath of citizenship. Then, it was done. Selfies abounded. The soldiers backslapped their friend. Shy teenagers hugged their mothers. Family members crowded around to examine and admire the citizenship certificates. There were tears.

Outside, it was a regular Wednesday afternoon. Inside, lives were changing, had changed. It was intensely moving to see the depth of happiness expressed by these people and to share in the ceremony that granted the privilege of a nationality that I’ve enjoyed solely from the dumb luck of my birth. We had pursued the certificate of citizenship so that Huck could never be troubled by being sent back to Guatemala. We were trying to make sure that he’d never be on the edge, but rather on hard bedrock in terms of his rights, his freedom, and his future. Esequiel, I thought, ostensibly had all that too, but those protections weren’t enough for him. Maybe they’ll be enough for Huck, and for the people in this room, waving souvenir flags they’d dug out from their citizenship packets.

My motivation for seeking the COC, I realized, sprang from fear that my own government could take a life away from me. My son is in the same grade as Esequiel was when he died. My son frequently and joyfully explores our family friends’ borderland ranch, accompanied by their boys and a plinking rifle. He’s copper-colored and sweet-natured, a teenager who likes horses and sleek cars. Don’t shoot. Don’t send him away.

The government made changes after Esequiel died, temporarily banning the military’s presence on the border. When they did return, some months later, the Marines built roads instead of conducting surveillance. A comprehensive Marine Corps investigation after the incident found that the shooter had acted within reason but condemned the mission’s training as thoroughly inadequate and decried the team’s failure to render medical aid when Esequiel lay dying before them. A death like this, born from rash decisions and poor forethought, should never happen again. We should never let it happen again.

Our son is nearly sixteen years old, at the edge of manhood and independence. There are no troops on our local border now, at least as far as I know. There is talk of a wall, though, and while I grant that the bad guys and drugs that slip over the border pose genuine dangers, I’m not sure a wall is the answer. I’m less afraid of what the wall keeps out and more troubled by the decision-making and attitudes in our homeland. Huck is sheltered, for now, as a brown-skinned kid in what is mostly a brown-skinned town, a tolerant and loving place where everyone knows his name. Unlike acquaintances elsewhere, he has, to my knowledge, never suffered a mutter of racism nor has he ever been cast an ugly look. This may not always be the case. When the boundaries of parenthood loosen and he goes out alone, to college and beyond, some jerk could mouth off to him and tell him to go back to where he came from. Huck will, I hope, have the grit and wits to reply, Stranger, I am home.

We drove south recently, past Chinati’s great domed peak, through Presidio and down the river road, with its hip-high bluebonnets, to Redford. A rectangular border of concrete girds Esequiel’s grave, poured on the fifteenth anniversary of his death. Scratched into it is the date “5/20/12” and “15 years,” along with a row of handprints carefully placed in the concrete. Some of the handprints are quite small, made by children who were born long after Esequiel died. They never knew him, but the connection is there. I also never knew him, and he is not my family, but I kneel in front of the grave and methodically press my hand into the prints, one by one. It does not take long until I find one that fits.