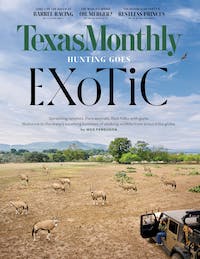 When I first met Wes Ferguson two years ago, over beers outside an Austin sandwich shop, our conversation quickly turned to hunting and fishing. We had both grown up in small towns and working-class families where chasing bass and birds and bucks was a treasured way to enjoy the outdoors with relatives and friends while putting food on the table.

At the time, Wes was the managing editor of Texas Highways, a magazine I admire, especially for its coverage of our state’s wild beauty. He had also authored excellent books on the Blanco and Sabine rivers and had written about everything from backyard wrestling to bigfoot sightings. And before becoming a full-time ink-stained wretch, he worked as an oil field hand in East Texas and a ski instructor in Australia.

It took a bit of wooing, but we were able to lure Wes to Texas Monthly, where, as a senior editor, he has delighted readers with his writing, including on field sports (see especially last May’s “The Great Texas Fishing Safari”) and quirky characters in our history, such as the legendary cedar choppers of the Hill Country. His feature revisiting Kilgore College’s staging of the play Angels in America: A Gay Fantasia on National Themes, which took place in 1999, when he was editor of the school’s student newspaper, was nominated last year for a National Magazine Award—the Oscars of our profession—and was recently optioned by Hollywood producers for a TV series.

Some months ago, Wes and I discussed the growing number and variety of exotic creatures—emus, zebras, Asian antelope—that we were seeing behind tall fences on big ranches as each of us drove across the state to hunt and fish. Wes began looking into it, and his findings became the subject of this month’s cover story.

Hunting is, of course, a controversial topic that often divides urban Texans from those who maintain roots and traditions in rural areas. The importation, breeding, and hunting of exotic species on private ranches is even more controversial. The cost of such sport is beyond the reach of most hunters, and many question whether it’s a sport at all, given that many of the animals grow fairly tame in captivity. Proponents of exotic hunting, however, note that about 90 percent of three antelope varieties that are critically endangered or extinct in their native lands now live on ranches in Texas—and some ranches have sent animals bred here to reestablish herds in Chad. The hunting of exotics has also become a big business and has bolstered the struggling economies of some of our rural counties.

Whatever your views on exotic hunting, or hunting in general, I think you’ll find Wes a clear-eyed guide to this timely topic.

Wes got a strong assist from his editor, the aptly named Forrest Wilder, who handles many of our stories on outdoor activities, when he isn’t busy directing our political coverage. Forrest is less interested in hunting than in fishing and kayaking and rock climbing, and many weekends he flees beyond the reach of my phone calls and texts to magnificent landscapes in Texas and northern Mexico.

Although traveling safely to such locations has become more difficult during the pandemic, we’re hoping things open up quickly in the coming months, and we plan to bring you more coverage of all the ways that Texans can enjoy the natural beauty of our state and its neighbors.