Featured in the Houston City Guide

Discover the best things to eat, drink, and do in Houston with our expertly curated city guides. Explore the Houston City Guide

In Houston the other day, children outfitted with virtual reality goggles were careering through the universe when an elderly man stopped to admire the world’s largest pallasite, a type of meteorite. He was decked out in a blue NASA flight suit, which suggested that he might have been a retired astronaut rubbing shoulders with some of the million or so annual pilgrims to Space Center Houston, the massive shrine to the past and future of human space flight. After all, astronauts regularly swing by from NASA’s Johnson Space Center, situated right across the street, to give public presentations or have lunch with guests who pay for the privilege.

But you don’t have to be an astronaut, retired or otherwise, to sport your very own NASA flight suit. The blue onesie goes for $99.99 in the well-stocked gift shop at Space Center Houston, where the boundaries between NASA engineers, aerospace aficionados, and seekers of space-age spectacle collapse like old stars across distant galaxies.

The complex is filled with more than four hundred space artifacts, including shuttles, lunar modules, and an array of vintage space suits. The center also boasts a Lunar Samples Vault, which contains the world’s largest publicly viewable collection of moon rocks. You can even touch one of the rocks brought to Earth by the crew of Apollo 17 and later polished smooth by the oil from millions of human fingertips. “The oil and the Houston humidity turned it soft and silky,” explains Space Center spokesperson Meridyth Moore.

Space Center Houston offers public access to the Johnson Space Center, where NASA conducts astronaut training, research, and flight control. Trams take visitors to NASA’s facilities, where one might stop first at the Apollo Mission Control Center, which, though inactive, was restored earlier this summer to its original moon-landing-era appearance, complete with cigarette butts in the ashtrays.

From mission control, the tram heads to NASA’s Space Vehicle Mockup Facility. There, scientists develop next-generation spacecraft and high-tech apparatuses like “Robonauts,” humanoid robots that are so dexterous they can sense and match the firmness of a person’s grip when shaking hands. Anticipating questions about NASA’s much ballyhooed zero-gravity chamber, a tour guide announced that, contrary to popular belief, it is “completely science fiction.” To simulate weightlessness, astronauts here train underwater.

On its way back to the visitor center, the tram makes a final stop at Rocket Park, home of a number of spacecraft, including a Saturn V, the launch vehicle used on the Apollo missions. At thirty stories tall, the massive spaceship is stored on its side in a building constructed around it. Stepping off the tram on a recent afternoon, a tiny girl with a pink bow in her hair took her mother’s hand and said, “I wanna see the rocket.” She stopped in front of one of the other projectiles, which towered above her and everyone else. “That rocket,” she whispered, gazing upward. “That rocket flies.” 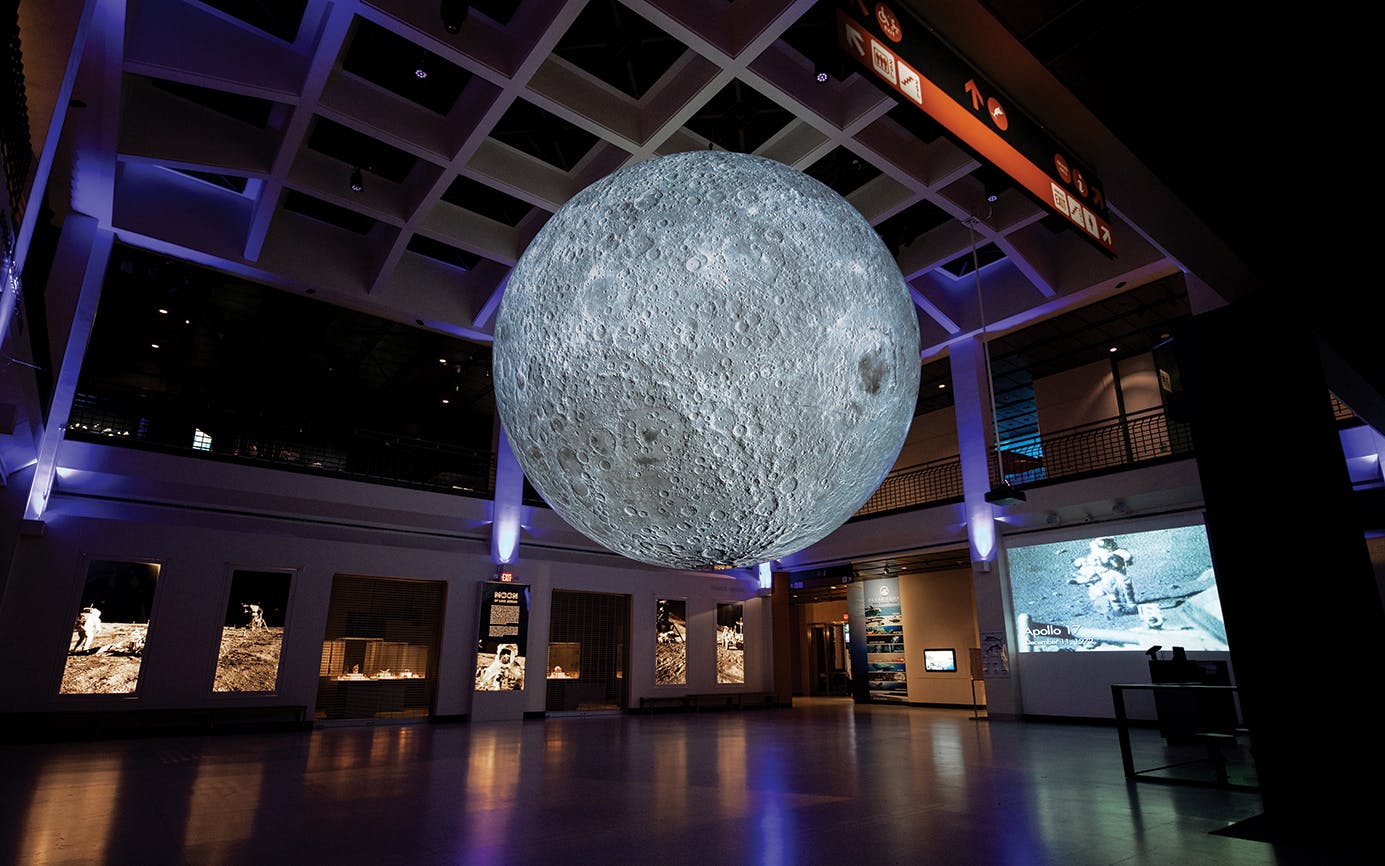 Whether you want to experience a space shuttle mission, gaze at the Apollo 7 spacecraft, or smell the moon, Texas is the place to be.

British artist Luke Jerram’s hyperrealistic sculpture Moon, a whopping 23 feet in diameter, hangs from a ceiling in the Houston Museum of Natural Science through the end of the year. The museum further celebrates the fiftieth anniversary of the moon landing with a new planetarium show, “To Defy Gravity,” and journeys to the moon via spacecraft simulator.

Ever wonder what the moon smells like? Just press a button and sniff at Beyond Planet Earth: The Future of Space Exploration, which will be at the Bullock Texas State History Museum, in Austin, September 21 through January 12. The traveling exhibit presents an ambitious vision for “humanity’s next steps into our solar system and beyond.” Check out models of space planes that might soon fly tourists beyond Earth’s atmosphere, try your hand at terraforming Mars, and explore an ocean below the icy surface of Europa, a moon of Jupiter.

Compare the sizes of planets, learn how scientists use light to study distant galaxies, and participate in other hands-on activities for all ages at Expanding Universe Hall, part of the Perot Museum of Nature and Science, in Dallas.

The Exploration Space Initiative, a section of the Frontiers of Flight Museum, next to Dallas Love Field, displays the Apollo 7, the
first Apollo mission to carry a crew into space.

This article originally appeared in the September 2019 issue of Texas Monthly with the headline “Astronaut for a Day.” Subscribe today.

More in the Houston City Guide

By Will Bostwick
Food & Drink

The Best New Texas Restaurants in 2022

Dear Austinites, You Have Permission to Move to an Affordable, Weird City: Houston