With the exception of a few hidden oxbows, Texas is home to a single naturally formed freshwater lake, Caddo Lake, along the Louisiana border. But given the need for flood control and demands for water across our increasingly urban landscape, Texas has created nearly two hundred impoundments. Decades of stocking, meanwhile, have transformed these waters into an angler’s paradise—with bass the most popular game fish. In addition to Lake Fork, try casting your luck at these lakes.

In 2018 Bassmaster magazine named Big Sam the top bass lake in America based on its recent hot streak of producing double-digit bass. Built on the Angelina River, north of Jasper, Rayburn is second only to Lake Fork in the number of recorded trophy catches. This is also a great lake for crappie and catfish.

At a mere 250 acres of surface area, this is by far the smallest lake on this list, but the Fort Worth impoundment has already produced the first monster bass of the year, a 14.57-pounder caught in January. Work the vegetative shorelines, say the experts, and get ready to land a whopper. For keep-and-eat anglers, crappie remain another popular target.

Along the U.S.-Mexico border, some forty miles southeast of Laredo, this huge impoundment is a magnet not just for trophy chasers but also for anglers wanting to take advantage of the proliferation of four- to six-pounders that make it one of the state’s leading bass fisheries. Hiring a guide can help you unlock the secrets of this massive lake on the Rio Grande.

Partly located in Sam Houston National Forest, this 20,000-acre reservoir draws a lot of jet-skiers and pleasure boaters from the Houston area. Still, the fishing is excellent; more than two million fingerling Florida-strain largemouth have been stocked in Conroe since 2010. Launch from the lake’s north end to avoid the worst of the boat traffic.

The Highland Lakes, including LBJ and Lake Austin, promise largemouth lovers a variety of options, but it was Travis that was in the spotlight last year when the 65-mile-long reservoir hosted the Bassmaster Elite Texas Fest. If you can’t land a largemouth, try targeting striped bass, white bass, perch, or catfish. 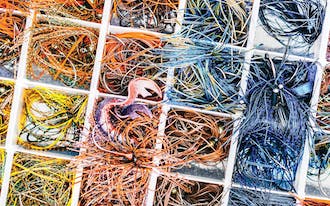 Dreams of Landing the Big One at Lake Fork