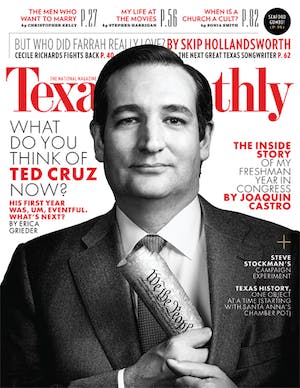 The first time I saw the Eiffel Tower, I thought it looked like an oil derrick. I loitered at dusk on a bitter-cold day waiting for the mythical monument to light up like a Christmas tree. As the lavender sky blackened, a computerized choreography of red, blue, and green lights danced up and down the dark steel. The effect was more akin to something you’d find at Disney World than in the center of the most glamorous city in France. A truckload of teenage boys in camouflage rumbled by behind me, fresh mud up to their windows, as my phone buzzed with an incoming text: “Make it to Paris?” I replied with a quick snap of the tower, making sure to get the shiny red cowboy hat atop its spindle into the frame. Yes, I’d made it to Paris, Texas.

No city in this state would be mistaken for Paris, France, least of all this one on the western edge of the Piney Woods, with a population of 25,000 and a median income of $32,000. And yet every time someone mentions Paris, Texas, the synapses in our brains simultaneously fire up thoughts of the City of Light, which may or may not be this town’s namesake. We can likely credit George Washington Wright—a Tennessean with one helluva aspirational moniker himself—for naming Paris. After fighting in the Texas Revolution, Wright settled in the area, opening a store, serving as the local coroner and justice of the peace, and holding court (literally) in his home. By the time he donated fifty of his thousand or so ridgetop acres to officially establish the Lamar County seat, in 1844, the community’s name had already crystallized.

So why “Paris”? No one knows for sure, but everyone has a favorite theory. At the Lamar County Historical Museum (1015 W. Kaufman, 903-783-0064), a red-brick repository near the restored Union Station Railroad Depot, I happened to meet local historian Skipper Steely, a prolific self-publisher (forty books and counting) who, as Wright’s great-great-grandson, was basically born to be a town booster. As we walked through rooms of artifacts tracing Paris’s highs (the cotton and railroad heyday of the late 1800’s) and lows (the 1893 lynching of Henry Smith), I got a primer on the various hypotheses: That some bored men sitting around Wright’s store plucked an item off the shelf, saw it was made in Paris, France, and declared that the town’s name. That a local girl (whose legal guardian happened to be Wright) got to pick the name after winning a children’s beauty pageant. That Wright employed a fellow by the name of Poteet, who lobbied to call the place Paris in honor of his supposed French ancestors and because he thought it was dignified. (That’s the theory favored by the Handbook of Texas, for what it’s worth.)

I asked Steely which story he subscribed to. As it turns out, he believes the name’s not a nod to the French at all but rather to Greek mythology, which was likely featured in the lesson books sold to homeschooling pioneer mothers. Paris was the handsome, if cowardly, Trojan prince who got the girl but started a war. If indeed the town’s namesake, you see the PR challenge he would have presented, even in the nineteenth century.

PLAN A WEEKEND in Paris using the Wanderer’s curated trip guide, with tips on where to stay, what to eat, and what to do.

A name has suggestive effects on one’s behavior, character, and even chosen profession, to say nothing of others’ perceptions of you. (Just ask any boy named Sue.) It’s a psychological truth that Paris, Texas, has embraced and played to its advantage. The inexact 65-foot replica of the Eiffel Tower, on the southeast side of town, is just the most obvious homage. Walking into the shops around the historic square, I encountered many more mini Eiffels: in blingy rhinestones on a T-shirt, as a pair of bookends, even on a bottle of Paris, Texas, Eau de Parfum.

But no matter how persistently the French connection is played up, the real allure of “the second-largest Paris in the world” is simply its Texanness. In 1984 German director Wim Wenders and playwright-actor Sam Shepard made a moody movie about a Texas drifter and called it Paris, Texas. The town—low-grade spoiler alert—is featured in name only. After being mistaken for that other Paris, it’s the destination that the protagonist never quite reaches. Even so, the citizens of Paris made a good time of it, hosting a fancy premiere in the town’s 1937 Grand Theater. Glen Gambill, the president of the Lamar County Historical Society, who has lived all but two and a half of his 78 years in the area, remembers breaking out a new pair of jeans and a shiny gold tuxedo jacket for the occasion. “The wife and I got all dressed up, and my best friend, who had a double-cab dually, chauffeured us over,” he told me. The movie “went over like a lead balloon,” said Gambill. “But apparently they loved it in Europe.”

Though the Eiffel Tower is hard to miss, the town’s biggest draw is its historic downtown plaza. Ringed with WWI-era storefronts, the square isn’t anchored by a courthouse, as in so many small Texas towns, but by an Italian-marble fountain built to commemorate the city’s rebirth—and refusal of government assistance—after a devastating fire in 1916. The 1868 Sam Bell Maxey House (812 S. Church, 903-785-5716) and the six-mile Trail de Paris more than merit a side trip, and the plethora of antiques shops and good cooking demand a full-blown weekend getaway. I happily ate not once but twice at both Bois d’Arc (208 S. Main, 903-785-2525), a white-tablecloth establishment serving gussied-up comfort food, and the Paris Bakery (102 N. Main, 903-784-1331), where I wolfed down fresh-made pastries with my morning coffee and then returned for the hand-stretched pizzas made on Saturday nights. After a lunch of Frito pie at Crawford’s Hole in the Wall Cafe (203 3rd, 903-737-9025)—I managed to snag the last open table)—I trekked into the expansive Evergreen Cemetery to see the famous headstone with a cross-hugging, cowboy boot–wearing Jesus.

Back on the square, not far from a formal-wear outlet with Dreamsicle-orange quinceañera dresses and camo tuxedos in its windows, I slipped into Monique’s Antiques (24 W. Plaza, 903-784-5030), which sells tastefully rustic French farmhouse furniture. I overheard the proprietress, Monique Crook, a trim older woman with neatly coiffed brown hair, talking to a couple of ladies about layaway. Or “lay-wu-ay,” as she pronounced it, in her elongated, not-from-around-here accent. Could she be . . . French? “Oui,” she said. Born in Paris, France, she’s the widow of a rancher with deep East Texas ties and has lived in Paris, Texas, for the past two decades.

Though she didn’t seem impressed by this coincidence, she became decidedly more animated when telling me about her annual trip back to her homeland. “My friend I stay with in Paris, France, every summer, she gives a party,” she began. “One year, she calls me and says, ‘Guess what the theme is? It’s Western!’ She was going shopping for cowboy boots and country music, and she was pulling out the Texas belt buckle I’d had made for her husband. She was going to have barbecue!” She shrugged her shoulders as if to say, “C’est la vie.”

PLAN A WEEKEND in Paris using the Wanderer’s curated trip guide, with tips on where to stay, what to eat, and what to do.