If I quit now, I’d have made it a quarter of my trip around the state of Texas, 782 miles. That’s pretty good, but there is no way I can quit now. I have so much more to see. While spending this past week in East Texas, I must’ve passed about five million pine trees—and I appreciated every single one. The only thing I found nicer than the trees in East Texas were the people I met along the way, especially those who reached out to offer me a place to stay or a wheel to ride behind. 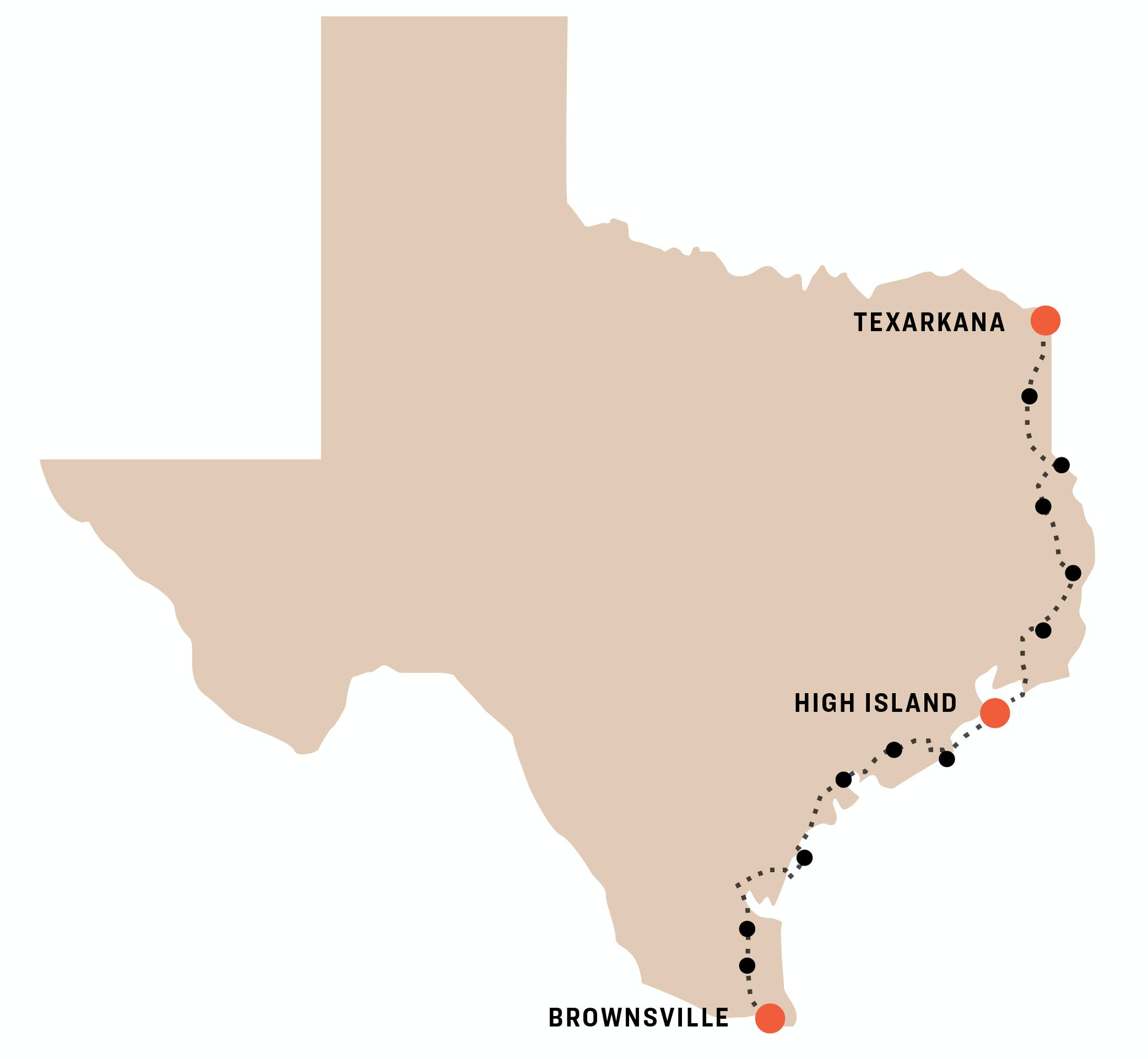 As I was packing my things in the morning, the skies opened up over High Island RV Park and rain poured down for a good fifteen minutes. I could have slowed down my departure, but I had a schedule to stick to. I was riding, no matter what. Luckily, the rain slowed to a drizzle as I was pulling away from the RV park. Riding away from the coast through marshy landscapes, I spotted a few dead alligators along the road. This was the first time I had seen gators in Texas, alive or dead. I grew up in Florida, where gator sightings are common. Only senior citizens outnumber alligators there. It made me momentarily homesick, but then I remembered the whole hanging chads thing. And Limp Bizkit, how could I forget? I felt happy to be in Texas, home of Willie Nelson.

I grabbed a breakfast burrito and a Mexican coke at Burrito Express in Winnie, twenty miles into the day. The place doesn’t look like much from the outside; I would’ve ridden right past it if Jacey Deloney hadn’t sent me a tip on Twitter. Good thing he did, because the burrito was delicious and quite hefty. I then headed toward Lumberton, which wasn’t on my original itinerary. I’d planned to go to Port Arthur to spend my day off, but I couldn’t find any hotel rooms available in the aftermath of Hurricane Laura. Beaumont and Orange were also fully booked. Lumberton was the closest I could find. So my ride took me almost directly north into East Texas’s Pine Curtain, where I would be for the rest of the week.

This was my first day off of the trip, and I think I did it right. I cleaned my clothes and my bike. I also found time to lie around watching movies, like Donnie Brasco and The Joker, and enjoying some cool beer. That was about it.

When planning where to stay in Newton, I had called a couple local churches to see if I could pitch a tent on their grounds. The second church I called, First Baptist Church Newton, was receptive to my request. I spoke to Pastor Ian Angelo. He told me he needed to talk to the deacons of the church and he would get back to me. When he called back, he told me he had found me an RV park to stay at just outside town, Whispering Creek Lodging & RV Park. Knowing where you are going to stay in advance is a big stress reliever that lets you enjoy the ride. And that’s just what I was doing. I was moving fast through the pines, passing swamps and getting constantly buzzed by huge lumber trucks. It was invigorating. I even made time for lunch at Jenny’s Fried Chicken in Kirbyville. With a stomach full of chicken and sweet tea, I jumped back on the road for the twenty more miles to Newton, when my perfect ride was interrupted by a soft back tire. I seemed to have a slow leak. So I pumped it up and kept going. I repeated this step every ten minutes all the way to Newton. I could have changed it on the road, but I just wanted to get to Whispering Creek and do the maintenance there. I made it without too much effort. After a quick tube patch, a mediocre shrimp po’boy, and a couple beers, I hit the hay.

After a quick breakfast of donuts, I was on the road for another day among the pines. This was my first day with any substantial hills. Most of the day was spent on U.S. Highway 96, skirting along Sam Rayburn Reservoir. I took an extended lunch stop at Ol Miller’s outside Jasper, where I loaded up on liquids and scarfed down a chopped beef sandwich. The stop was extended, because that sandwich did not sit too well, so I zoned out on the bench out front for a while until I felt well enough to continue riding.

Once in town, I checked into my room and went to look for beer and food. While buying beer at John’s Package Store, I asked the clerk for a good recommendation for something close by. She pointed me across the street to Watts & Watts BBQ and told me to get a loaded baked potato. Seemed like a smart option to me. Unfortunately, they had just sold their last potato for the night, so I opted for the “poorboy,” a massive chopped beef and sausage link sandwich. I had a hunch this one would make up for the one I had at lunch. I was right: it was a chopped beef redemption. Make time for Watt & Watt if you ever find yourself in San Augustine.

Rolling hills took me through some particularly beautiful piney landscapes as I made my way to the Texas state line. I planned to cross the border into Louisiana, as I would for the four other states that border Texas. Once I got to Logansport, I stopped at Big Zach’s Place for a shrimp po’boy. It hit the spot, and two servers, Cansas Prudhome and Kirsti Jernigan, were very nice and curious about my trip. I still had a lot of time till the sun went down, so I decided to wash some clothes at the laundromat down the street. I went next door to the service station to get some change and took a glance at the beer coolers. Well, there actually were none. Turns out Logansport is a dry town.

I crossed back into Texas to stay the night at Geronimo Village RV Park in Joaquin. They let me set up my tent in the field next to the office. After making camp, I went to the gas station across the road to grab dinner and some brews. Dinner, sure, but it turns out Joaquin is dry too. I couldn’t believe it, so I asked an elderly man who was smoking out front. He was not sure, but when his wife came out he asked her and then they started bickering about it back and forth. I quietly backed away and made my way back to my tent.

I woke up a little later than planned and packed up as fast as possible, but the process still took almost an hour. I need to get faster at this.

The first half of the day took me to Carthage via some rugged yet beautiful roads. My favorite was County Road 430, which took me up and down and left and right, past farms tucked away in the pine forests. Traveling this road reminded me of walking the Camino de Santiago in Spain, even down to the occasional waft of fermenting hay. The road took me to Old Center, which seemed to consist of only a church and an old cemetery. There, I took a fifteen-minute breather to watch the few churchgoers trickle in across the street. Before reaching Carthage, I passed a farm with a few friendly horses that I was able to coax over to the fence, but they seemed perturbed that I just wanted to say hello and had nothing to feed them. I apologized in the best way I could, by talking to them like I talk to my dog, and jumped back on my bike.

Closing in on Marshall, I was famished. I found a Waffle House on the map and for the next five miles I daydreamed of a double order of hash browns, smothered and covered. My hopes were dashed when I rolled up to find the place temporarily closed. Luckily I found El Taco, just down the hill, where I devoured a gigantic burrito, a margarita, and a coke on the empty patio. I was stuffed, but had to ride a few more miles, all uphill to my hosts’ home. Fellow cyclist David Hollowell had been following my rides on Strava and reached out to see if I needed a place to stay while in Marshall. He and his wife, Christine, live in historic downtown Marshall and set me up in their retro pop-up camper. They even fed me and had beer. I need to ride around the state more often.

After a quick coffee with David, I hit the road. It was going to be a long day of riding, and I had to be in Jefferson by 9 a.m. to meet my riding partners for the day. I stopped four miles out of town for a quick pizza breakfast and to fill up my water bottles. As I was pulling out of the gas station, I almost pulled a full Pete Rose slide off my bike, but quickly unclipped my foot and caught myself before doing damage to my bike or myself. I had a flat. I flipped over my bike and checked my tire, but couldn’t find anything. I pumped it up and set a five-minute timer. When the timer went off, the tire still felt good. If anything, the leak was slow. I pushed on toward Jefferson, with the paranoid thought that my tire might quickly deflate at any moment.

Jefferson is fifteen miles north of Marshall and is one of those picturesque Texas small towns. In the mid-1800s, it was Texas’s sixth-biggest city, a bustling steamboat port along the Red River. I met up with David Huber and Gary Ford, both from Longview, at the Jefferson General Store. After a quick meet and greet, we were on our way. We had sixty miles ahead of us. Around twenty miles in, close to Bivins, I noticed my front tire getting squishy. I was hoping I could fill it up again and continue on with the slow leak. No luck this time. With an assist from Gary, we got the new tube in and were back at it in record time. Then before we hit Atlanta, David’s tire blew out. Gary had the sneaking suspicion that he was next. After Atlanta we were on U.S. 59 with fast traffic; we hunkered down and sped into Texarkana. David and Gary had ridden this route before and knew to bring me up to State Line Avenue toward the post office that straddles the boundary between Texas and Arkansas. After a quick photo op, they escorted me to my hotel, where they’d parked a truck the night before so they could drive back to Longview after our ride. I thanked them for pulling me all the way to Texarkana and we said our goodbyes. I felt a bit guilty for instantly crashing in my room as they began the drive back home. But those are the little gifts one gets for taking an epic two-month journey around the state.