For those of us born decades after Apollo 11 returned from its mission, the imprint of astronaut boots on the lunar surface has always been historical fact. We can’t conjure personal memories of that voyage, of families huddled around the TV or radio, anxiously waiting for news of that one small step, that impossibly giant leap. And yet that journey—the ambition, bravery, intellect, and imagination it demanded—continues to inspire us fifty years later.

Robert Ellis was born nearly two decades after Neil Armstrong made “Houston” the first word spoken on the moon. He grew up in Lake Jackson, some fifty miles from NASA’s Apollo Mission Control Center. The legacy of the Apollo program and the iconography of space were all around him: the Astros, Rockets, AstroWorld, and “Space City.” “It’s a part of our identity,” Ellis says, “I got sort of obsessed with how mind-blowingly cool it is that people decided to go to space, and that where I’m from was such a part of it.”

The same year that Apollo 11 made its lunar debut, Nina Simone released her studio album Nina Simone and Piano! The fourth track is a cover of “Everyone’s Gone to the Moon.” Composed by the English songwriter Jonathan King in 1965, the original song is pure Brit-pop cheese, but with Simone at the keys, the song is transfigured, layered with the emotional depth of her vocal delivery and avant-garde arrangement. It was this version that captivated Ellis, just as the space program had.

To commemorate the 50th anniversary of Apollo 11’s  launch, Ellis recorded his own take on “Everyone’s Gone to the Moon.” The video to accompany the tune was directed by his partner, Erica Alexandria Silverman, and features the Texas Piano Man in one of his signature garments: a rhinestone space suit handmade by Union Western. The sequined rockets and astronauts glint on the deep blue blazer like stars in the night sky. Ellis, solo on the piano like Simone, sings in an almost elegiac tone before his voice lifts off in the final refrain. It serves as a fitting soundtrack for contemplating this milestone and considering what giant leaps we have yet to make.

“I’m continually inspired and in awe of NASA and the Apollo 11 space mission,” Ellis said. “This is a tribute to them, and to Nina.” 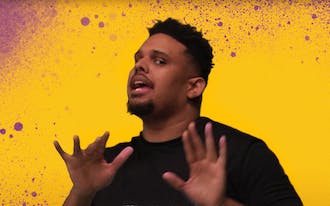