Hammer, who played the Winklevii twins in The Social Network and recently appeared alongside Leonardo DiCaprio in J. Edgar, is arguably the least famous of the celebrities recently (allegedly) caught with drugs at the checkpoint: Willie Nelson was arrested on his tour bus in November 2010 with six ounces of marijuana and Snoop Dogg was nabbed earlier this month when a drug dog sniffed out .13 pounds of marijuana on his tour bus. Hammer’s relatively low profile may have helped his November 30 arrest only come to light on Wednesday.

Hammer’s alleged tastes tend toward the pot-laced baked goods. The Associated Press reported he had “0.02 ounces of marijuana, three medicinal marijuana cookies and one brownie” in his car when he was stopped. Armie paid his $1,000 bond after spending a day behind bars.

TMZ, which released Hammer’s mugshot, declared Hammer to be “the most clean cut criminal of all-time.”

To mark Hammer’s arrest, E! Online rounded up five other “famous Texas tokers” arrested in the state, including Matthew McConaughey, Chace Crawford, Paul Wall, and Baby Bash. (How the state’s most famous toker of all was left off the list is beyond us.) 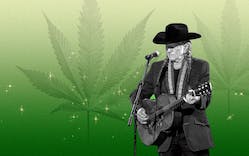