This issue of Texas Monthly marks the last time that T. J. Tucker will appear on our masthead as creative director. Tucker, who joined the magazine in 2003 and ascended to the top design gig in 2006, is leaving us to open his own firm, Tucker Creative Co., with his wife, Lindsay.

Before he walked out our doors, the Baird native and Texas Tech grad agreed to share with us the stories behind what he regards as the best and worst covers he designed for the magazine. 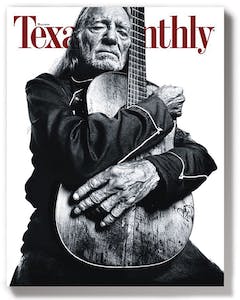 Everything worked out with this one. I got to collaborate with the photographer of my dreams, Platon, and Willie understood the idea right away and ran with it. What I’m proudest of is that Evan [Smith, then the editor of the magazine] had the cojones to say, “We’re not going to run any cover lines on this one.” Evan and I walked the mockup of the cover around the office to see what people thought, and there were people who said, “He looks dead!” Or “Why are his hands so huge?” But that cover has gotten more attention than any other cover I’ve done. We’ve gotten tons of requests to do it as a poster or a print. A bar made a mural out of it on their restroom’s wall. Our former art assistant, Nicki Longoria, brought a guy up to the office once who had the image tattooed on his calf.

The newsstand version actually had some type on it: “Willie at 75, by Michael Hall.” But getting this image, with no type, out to our subscribers? That felt like a huge win. 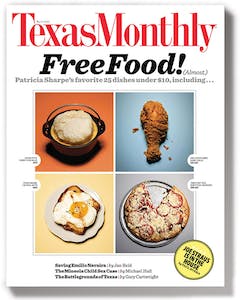 Everybody and their dog was doing a “Cheap Eats” cover in those days, and we wanted to do one too. But we didn’t want to call it “Cheap Eats,” so we came up with “Free Food.” Which sounded kind of, well, cheap, you know? From a design standpoint, it was hard to get excited about. We mocked up I don’t know how many versions, and I convinced myself that what we eventually went with was fine.  And then the finished issues arrived. Usually there’s this magical thing that happens when you pull the new issue out of the box, but this time I took one look at it and I was like, “What in the hell were we thinking?” Food photographed on pastel colors just doesn’t work. It feels very un-Texan. If you want people in Texas to pick up your magazine, you’ve got to have a hint of Texas. It can’t just be, say, a fancy burger on a square plate. It’s got to be rustic-looking or something. This just didn’t feel like a Texas Monthly cover.

One Question for Tom Foster

Foster, an Arizona native and a graduate of Trinity University, in San Antonio, has lived in Austin for the past three years, after spending most of his adult life in New York City where, among other things, he served as editor of Men’s Journal.

What makes Texas a great place to be a journalist?

Men’s Journal is all about adventure—characters with big dreams, sometimes dangerous dreams, which makes for perfect narratives. When I started writing about entrepreneurs I learned that it’s pretty much the same—strong personalities with big visions putting a lot on the line. What interests me about business isn’t business, it’s people pursuing dreams. And where better than Texas, the land of the wildcatters, to plant those kinds of characters? That’s just a huge part of what Texas is.

By Jack Herrera
Being Texan