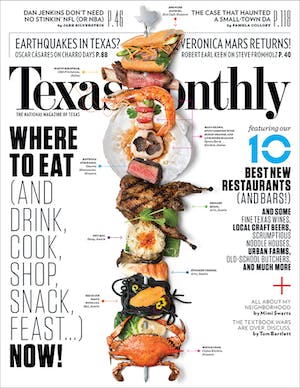 To understand why that’s so requires reading a book few of us actually will—even though it may well be the most important book about Texas published in years. Changing Texas: Implications of Addressing or Ignoring the Texas Challenge (Texas A&M University Press) is the third demographic wake-up call issued by Steve H. Murdock, whose previous books, The Texas Challenge (1997) and The New Texas Challenge (2003), established him as the prophet of the coming Hispanic majority and a heavy hitter in political and business circles. In 2001 Rick Perry appointed him the first official state demographer; seven years later, George W. Bush nominated him as director of the U.S. Bureau of the Census, a post he held until 2009.

Murdock is now at Rice University’s Hobby Center for the Study of Texas, and, aided by a team of co-authors and researchers, he’s had an opportunity to crunch the 2010 decennial census. The new data have expanded the reach and scope of his forecasting and provided his latest book with something of an interactive ending—at least in the sense that readers are offered a choice between enjoying future prosperity and plunging off an economic precipice. Just don’t expect a cliffhanger; with more than a hundred detailed statistical tables, Changing Texas is Fifty Shades of Grey for spreadsheet addicts. But at a time when so much that is written about Texas, both fiction and nonfiction, seems as hazily mythopoeic and overheated as the smoke from a barbecue pit, the cold, hard numbers have a riveting realism.

Most of us have at least a passing awareness that within a generation our state will have an outright Hispanic majority. Changing Texas statistically models that future in what amounts to an ideological clean room: The demographers don’t dwell on the historical discrimination suffered by Texas blacks and Hispanics. Nor do they consider the moral issues raised by the current disparities, in everything from educational achievement to incarceration rates, between non-Hispanic whites (NHWs) and Texas minorities (except Asians, most of whom arrived in Texas recently enough to escape systemic oppression). Instead, this carefully apolitical study zeroes in on how those disparities will affect our vaunted economic competitiveness over the next generation. And it’s this bottom-line analysis that puts Changing Texas squarely in the category of dystopian nonfiction.

As Murdock and his team make evident, what’s under way here isn’t just a racial changing of the guard but also a generational change. In a state where the average NHW woman is already on the fertility exit ramp and the average Hispanic woman has more than a decade of potential childbearing ahead of her (and is already likely to have more children than her NHW counterpart as it is), NHWs will provide no more than 2 percent of our overall population growth over the next generation, while Hispanics will account for 70 percent. That means that if Texas is to continue its present prosperity, we’ll increasingly depend on younger Hispanics to replace aging NHWs, both as earners and spenders.

And on our current course, we’re headed for what might be called Demogeddon. In today’s Texas workplace, NHWs dominate the managerial and professional ranks, partly because they make up almost two thirds of all Texas workers with bachelor’s degrees or higher. But as NHWs age out of the labor market, there aren’t nearly enough Hispanics earning such degrees to take up the slack. By 2050, the demographers project, Hispanic workers will outnumber NHW workers almost three to one, and the median income of Texas workers will actually decline, because Hispanics will remain concentrated in low-wage jobs. “In the absence of change,” the authors conclude, “the Texas labor force as a whole will be less well-educated, work in lower-status occupations, and have lower incomes in 2050 than 2010.”

Those declining wages won’t just affect Hispanics, they’ll put a lid on the high-powered consumer spending that Texas businesses currently enjoy. By 2050, Hispanic households will outnumber NHW households two to one, but they won’t have the income or accumulated wealth to spend like today’s NHWs on consumer-economy staples such as new cars and homes; instead, future Texas families “will be poorer, with less income, higher poverty rates, lower net worth, and fewer assets and will have housing that is of lower value . . . when compared to 2010.” In fact, NHWs, who currently possess 82 percent of total household equity, will continue to hold well over half of it a generation from now, when they’ll make up about a fourth of the population. But NHWs may need that extra cushion in their old age, because the tax base required to pay their benefits will erode alongside wages and consumer spending.

Of course, the almost legalistic clause that qualifies these gloomy forecasts is “in the absence of change.” And here in Texas, home of the nation’s most dynamic, unfettered economy, it may be reasonable to assume we’re already high-flying ourselves out of this downward-mobility death spiral. But the real news in this book is that according to the data, the booming Texas economy has only increased the disparity. In 1980 Hispanic per capita income was 46 percent of NHWs’, but by 2010 it had declined to an even more dismal 41 percent. Overall, considerably more Texans—including Hispanics—are now employed in managerial and professional jobs than in 1980, but the percentage of Hispanics employed in those high-paying occupations has declined. The rate of economic “closure”—that is, progress toward parity—between NHWs and Hispanics peaked in the nineties and dropped dramatically in the go-go first decade of this century.

But the demographers also tell us that their work “does not assume that demography is destiny.” Offering readers a chance to rewrite the final chapter of their dystopian saga, Murdock and his colleagues project the economic bonanza Texas could reap if we could bring about full closure. Instead of becoming “poorer and less competitive” over the next generation, we’d add eight million more high-paying professional positions, per capita income would rise $27,000, and Texas consumers would spend an additional $900 billion annually.

Murdock and his team avoid recommending specific policies that might close the gap. But they do cite studies and statistics showing that education has a major impact on individual economic outcomes across racial groups—and that right now, funding for public education at every level is another Texas trend headed in the wrong direction. On the other hand, Murdock notes, if Texas could muster the resources to successfully educate its minority population, “it could have a younger and more competitive workforce than the nation as a whole”—a nation that will also be facing the problem of aging NHW workers. But don’t hold your breath; a big boost in education spending—or any sort of helping hand for the working poor—is a tough sell in a state that is currently far more concerned about the national debt than the declining economy its children are due to inherit.

Changing Texas is unlikely to change the minds of rank-and-file Texas voters, who aren’t going to read it anyway. The more salient question is whether the political and business elite to whom this ideologically circumspect treatise is clearly addressed—and whose ear Murdock clearly has—will listen to its oracle. For a generation now, our entire state has in effect thrown a high-growth party with low-wage Hispanic labor—and with very little reciprocal thought for the welfare of those workers and their children. After all, they were always “them.” Now that “them” are about to become “us,” Changing Texas should be the catalyst for some serious thinking.