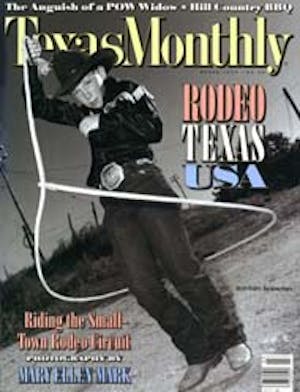 VISITORS TO LA VILLITA, SAN ANTONIO’S popular attraction saluting the city’s Hispanic heritage, will soon notice construction crews putting up a two-story octagonal building across the street at the previously moribund HemisFair. No, La Villita is not expanding. The vaguely Victorian brick pavilion, which is designed to fit in with the surrounding historic buildings, will honor San Antonio’s unheralded German heritage instead.

The new building is a key element in German Heritage Park, an ambitious scheme hatched three years ago by William Dielmann III, the former president of San Antonio Liederkranz, a century-old men’s singing club. Dielmann wanted to find the club a permanent home in congenial surroundings by its 100th birthday this year. No site seemed more appropriate than the block of buildings constructed by German immigrants in the nineteenth century, standing empty on the city-owned HemisFair grounds. The committee formed for the project envisioned a restaurant and beer garden with space upstairs for club activities. But the project would take careful planning, and no one knew if the city was ready to celebrate its German past in the way it has its Hispanic heritage.

For a while last fall, it seemed that German Heritage Park might not be easily approved, judging from the plight of another German club. A few blocks away from the proposed project, the 125-year-old Beethoven Maennerchor (“Men’s Chorus”) was engaged in a desperate struggle with the King William Neighborhood Association. In a dispute over zoning for a property that the Beethoven club had acquired, the powerful neighborhood group had made it clear that it considered the old-fashioned ethnic social club a nuisance. Pointing to long-standing noise and parking problems as a result of the club’s rental practices, the neighborhood association strongly opposed any expansion and demanded restrictions on club activities. In a series of preliminary zoning hearings, the city had sided with the neighborhood association every time.

Both the Liederkranz and the Maennerchor draw their support from the thousands of San Antonians of German descent, the legacy of a massive nineteenth-century immigration that transformed San Antonio into a trilingual culture before the turn of the century. At that time, as many San Antonians spoke German as English. Several men’s choral groups provided a familiar social outlet for the new Texans, and a few of the organizations survived the two wars fought against their Old World relatives.

Founded in 1892 at the landmark St. Joseph’s Catholic Church, the Liederkranz practiced in St. Joseph’s Hall almost from the beginning until 1966, when the building was condemned to make room for HemisFair. Meanwhile, the church connection has sustained the club—the Liederkranz sings mass at St. Joseph’s once a month. Many of the singers attended Central Catholic High School, and club members include such well-placed businessmen as Al Notzon, the chairman of the Alamo Area Council of Governments, and Manny Berriozabal, the husband of former council member and recent mayoral candidate Maria Berriozabal.

But the German Heritage Park board—made up entirely of Liederkranz members—did not rely on such connections. The Heritage Park board located German businesses interested in opening a branch in the buildings—a pastry shop, a newsstand and bookstore, porcelain and crystal manufacturers, a coffeehouse and deli, a spa, a German clothing boutique, and a wine shop. The board members logged hundreds of hours with civic and neighborhood groups, emphasizing expected economic benefits and pitching German Heritage Park as a major tourist attraction that would complement rather than compete with La Villita. By the middle of 1991, they had gathered $2.95 million in pledges, all tied to city approval.

The only significant opposition to the park, as it turned out, came from grande dame Margie Kilpatrick and her husband, former San Antonio Express-News publisher Charles Kilpatrick. Mrs. Kilpatrick, who had helped to establish a children’s playground on the HemisFair grounds, saw the beer garden as a potential threat. She insisted on a public hearing. But by the time of the November meeting, she felt that the plans were so far along that further opposition was pointless. Only two citizens spoke against the plan; Margie and Charles Kilpatrick did not attend.

The subsequent presentation by the German Heritage Park board to the city council turned into a German-American love fest as the council voted 10—0 for approval of a 25-year lease on a four-acre chunk of HemisFair with seven historic buildings, including Beethoven Hall, the old concert theater preserved at HemisFair. The Liederkranz members sang their traditional “Saengergruss” (“Singers’ Greeting”) and waved miniature German and American flags. Mayor Nelson Wolff, of German descent himself, had particular reason to be pleased—one of the buildings to be included in the park had been home to the family of his Sun Harvest Farms business partners Ron and Don Herrmann until HemisFair forced the last elderly relative out. The large residence, which has stood empty for about twelve years, will house a crystal, china, and wood-carving shop.

Some of the good feeling must have carried over, for later that same December day the city council also resolved the zoning dispute between the Beethoven Maennerchor and the King William Neighborhood Association. No further parking would be added to the new property, and the dilapidated house would be restored and possibly turned into a museum, creating a buffer between the club and the neighborhood. In return, the Beethoven Maennerchor could add more beer-garden seating. It was a great day for San Antonio’s German-American singing clubs.

Liederkranz bass Bernard Buecker, who also serves as an attorney for the German consulate, says that the economic fringe benefits of German Heritage Park have already begun to appear: In late January, after years of effort, the Towers at the Majestic complex surrounding the restored Majestic Theater finally found a lender. The project had long been heralded as crucial for downtown revitalization but had been stalled for lack of financial backing. The investor turned out to be a German businessman who chose the San Antonio development—instead of possibilities in Houston—after visiting the incipient German Heritage Park.