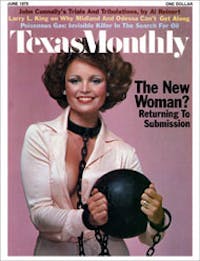 Someone called it Disaster Chic. We see it in our movies; we hear it in our music. Instead of writing out a check to our local Red Cross as granddad might have done, we savor the latest catas­trophe (real or imagined) and wonder what’s coming next.

Americans seem to be developing an appetite for doom. For the gourmands of apocalypse among us, then, we here­with serve up three homegrown, de­lectable disasters.

A soft drizzle is falling, etching billboards and severing tree limbs from their trunks. On parking lots and freeways, autos quietly dissolve to hissing heaps of steel; the edges of distinguished public buildings begin to melt away. Another rainy night in Corpus. Goodbye, Corpus.

On the Texas Gulf Coast, the world may end not with a bang but a fizz if the worst expectations of atmospheric scientists prove true. One type of serious pollution that has been mercifully rare in Texas—until now—is sulfur dioxide (SO2), a pungent, colorless gas produced by combustion of sulfur-laden fuel oils. It combines easily with water vapor and oxygen to become sulfuric acid (H2SO4), a substance so corrosive that even a high school chemist knows to handle it with care. Put enough sulfur dioxide in the air and, a few chemical reactions later, you’ve left behind a fine mist, an ambient acid mist, capable of etching not only billboards but also softer things like lungs.

Medical authorities shudder at the thought. Sulfuric acid is widely regarded as just about the most unhealthy kind of air pollution possible; one specialist in environmental medicine says flatly, “Sulfuric acid at just about any level is harmful.”

In the past, the industrial Gulf Coast has escaped this particular scourge be­cause the vast petrochemical industry has used natural gas as its principal source of fuel. But gas shortages are forcing a conversion to fuel oil—and even the cleanest fuel oil has ten times more sulfur content than gas. Within the next decade, the Texas Air Con­trol Board (TACB) estimates that 90 per cent of the major industrial fur­naces that now use gas will convert to fuel oil.

The resulting emissions, says the TACB, “will have an enormous impact in the highly industrialized areas of Texas.” A staff member currently grappling with the problem predicts “the whole coastal area from Beaumont to Corpus Christi will be badly affected. As a matter of fact, it’s already so seri­ous in Corpus that some hard decisions will have to be made about allowing any further industrial growth there at all.”

Not altogether by chance, the switch to fuel oil coincides with a period of phenomenal growth and expansion in petrochemical plants along the coast. Exxon at Baytown, Arco at Channelview, Champlin at Corpus—all are in­creasing their capacity dramatically. In the next eighteen months, coastal resi­dents will begin to suffer the effects.

Lest the rest of the state feel smug about the Gulf Coast’s plight, there is ample evidence that sulfuric acid pollution will soon be with us all. Nearly 200 gas-fired utility company boilers will convert to fuel oil by 1985, pumping at least 500,000 tons of SO2 gas into the air annually before the end of that decade. And then there is the matter of the catalytic converter. This Naderesque device—required equip­ment on all cars beginning with 1975 models—was intended to purify auto exhaust of hazardous carbon monoxide, a job it does well. Trouble is, it fills up the air with sulfuric acid instead.

Does the grim forecast for the Gulf Coast include the effects of this newest culprit? “Nope,” says a TACB lawyer. “We haven’t even plugged in the data on the catalytic converter yet.”

As if fire ants weren’t enough, the Brazilian Bee is coming.

Consider a bee that attacks and kills animals and human beings with the slightest provocation; a bee that eagerly adapts to the wild, forming colonies as uncontrollable and as menacing as packs of wild dogs; a bee that wages war on good-tempered domestic honeybees as ruthlessly as a Mongol horde; a bee so prolific that as many as 200 nests per square mile have frequently been found; a bee so restlessly on the move that it has been discovered swarming on boats six miles from the nearest land.

Twenty years ago there was no such thing as a Brazilian Bee. But in 1957 a visiting beekeeper accidentally released several queens from a fierce African strain that had been brought to Rio Claro, Brazil, for experimental pur­poses. The laws of genetics had their way, and within a few years most of Brazil’s domestic honeybees had disap­peared, replaced by an aggressive “Af­ricanized” hybrid that wrought havoc on the countryside.

The Brazilian Bee has been moving steadily northward through the tropics at the rate of 200 miles per year. It has also moved south from Rio Claro, prov­ing its ability to survive in cooler lati­tudes equivalent to those of Abilene and Tyler. Currently infesting Colombia, the bee is expected to reach Panama within two to four years, and Texas eight to ten years after that. Scientists believe conventional countermeasures—quaran­tines, trap hives, artificially induced dis­eases—can do little more than tempo­rarily slow its northward sweep.

The sting of a single Brazilian Bee is no worse than that of a domestic hon­eybee; the danger results from the Brazilians’ aggressiveness. A disturb­ance that might not even prompt a do­mestic bee to attack can instigate a frenzy of repeated stinging by hundreds of Brazilians. In one test reported by BioScience magazine, a piece of leather one inch square was jiggled on a string outside a Brazilian hive. The bees stung it 92 times in five seconds, and chased the heavily protected experimenter for more than a thousand yards.

The bees now kill about 300 human beings and thousands of animals each year.

When the Brazilian Bee reaches the United States, geography guarantees that Texans will be the first to know. The impact on honey production will be ob­vious—many beekeepers in Brazil went out of business, and honey production declined drastically. Agricultural pur­suits that now use bees for pollination will have to devise new techniques: the new bees are just not safe company for animals or people. But even more far-reaching is the question of just how safe the out-of-doors will be with these fear­less—even lethal—wild bees on the ram­page. In comparison, fire ants don’t seem so bad: at least they have to walk, so you can always outrun them.

Last September 21, a railroad car at Southern Pacific’s Englewood Yard in Houston exploded, touching off an eight-alarm fire that lasted for a week and did $13 million damage to other freight shipments, neighboring homes, and the yard itself. To the amazement of fire­men, no one was killed.

The Englewood disaster was caused by butadiene, one of the more than 1200 “hazardous substances” that can be—and regularly are—legally shipped by rail in the United States. Once a car carrying butadiene is punctured, the least spark can cause it to ignite. Its companions on the hazardous substance list—explosives, flammable compressed gases, poisons, acids, radioactive materi­als—are equally menacing if the usual precautions break down. That means the railroad tracks had better be in tip­top shape. They aren’t.

A disproportionate quantity of haz­ardous materials passes through Texas, much of it originating in the huge petro­chemical complexes near Houston, Beaumont, and Odessa. Military ord­nance is manufactured at Longview. Since the Englewood disaster, the Houston Fire Department has assigned one investigator to work full time on rail­road problems, which are particularly acute in the local yards. “That’s just a time bomb out there waiting to go off,” he says, adding dryly, “of course, that’s just our opinion.” The danger, he says, lies in “the whole operation, especially the condition of the tracks.”

Too many miles of Texas track are in pitiful shape, a fact which the Federal Railroad Administration readily ac­knowledges. But with a shortage of track inspectors (only one in the Hous­ton area office, for example), there is not much they can do about it. “God knows he’s got more than he can say grace over,” laments a Houston FRA official. A Texas legislative aide who recently rode around Houston with the engineer of a Southern Pacific switch engine reported seeing rails move sev­eral inches as freight cars rocked over them.

The track problem is not confined to Houston, either. Conditions are bad in all parts of the state—and many tracks run smack through the middle of residential areas. Hazardous cargoes are not routed around the cities. Trainmen recall the 1973 Roseville, California, disaster (where a trainload of antiper­sonnel bombs exploded) and worry grimly that it could happen here.

Specially designed cars carrying liquefied ethylene—which ignites when exposed to temperatures hotter than minus 213 degrees Fahrenheit—broke open three years ago near Dallas. Sure enough, as luck would have it, the Metroplex was warmer than that that day, and the ethylene turned into a gaseous cloud of flame. Since ethylene is lighter than air (unlike most flamma­ble gases, which hover along the ground) it promptly set ablaze the second stories of nearby homes.

Houston Representative Senfronia Thompson has proposed an interim leg­islative study committee to identify the worst danger spots: right now state offi­cials are not even sure where they are. She also sought an appropriation for state matching funds to bolster track inspections; at press time, her chances of getting the money seemed infinitesi­mal. Meanwhile, day and night, hazard­ous cargoes totter across rickety rails through residential neighborhoods.