Stories of disembodied spirits still clinging to their former lives—some out for revenge, some merely too stubborn to cross over—are so intertwined with Texas history that they’ve become part of our culture. Who hasn’t been to San Antonio and kept an eye out for the boy who appears in the Alamo’s gift shop? Or visited El Paso’s Concordia Cemetery in the middle of the night to hear laughing coming from the children’s section? Given our state’s vast number of bloody revolutions and natural disasters (an untimely end being a customary reason to linger), as well as our love of fantastic yarns, it’s little wonder that Texas is rife with paranormal manifestations. Unfortunately, some of our best-known haunts—like San Antonio’s Menger Hotel—have become so touristy that their fear factor has been nullified. So I sifted through dozens of accounts from around the state to single out the scariest locales. Spookiness may be subjective, but these eight sites claim particularly unsettling happenings that aren’t easily explained. A word of caution: Many allegedly haunted spots are on private property. A ghost might only scare you away, but an irate property owner might have you arrested—or worse.

Once a lavish getaway for wealthy Texans, this fourteen-story hotel now sits in disrepair. But in its heyday, the Baker, which opened in 1929, was known for its grand ballrooms and restorative mineral baths. It also became a haven for ghosts, and when the hotel closed, in 1972, the spirits that roamed its hallways remained. The most infamous is the hotel builder’s mistress, who inhabits a suite on the seventh floor. After committing suicide, she began leaving a red lipstick mark on unused glasses. Another specter is thought to be Douglas Moore, a bellboy who was crushed in an elevator accident in 1948. A few years ago a visitor on a tour began taunting Moore’s ghost. Tour guide Kira Connally wrote about what happened next: “As soon as the words left his mouth, the coldest air I’ve ever felt went whooshing past me, and it brought the woman next to me to her knees, as if she had literally been punched in the stomach.”

In the town of Calvert, about 35 miles northwest of College Station, numerous graves are clustered near the local high school. But if you keep walking past those plots and wander into the wooded area behind them, you’ll see it: the vault for D.A. Orviss and his wife, Louisa. Built in the late 1800’s, the crypt has been badly vandalized over the years, and the Orvisses’ remains were stolen long ago. “Hauntings tend to increase when there’s desecration,” says Casey Unger, a paranormal expert. She has encountered shadowy figures and unexplained cold spots, but her audio recordings of disembodied voices are the most disturbing evidence. On one tape, Unger can be heard saying, “I’m speaking to the spirits of the children who are here.” A breathy voice replies, “The children left.” Though there’s no record that the couple had a family, two child-size coffins sit alongside the Orvisses’. No one knows who the children were. Like those of D.A. and Louisa, their bodies have also disappeared.

The twenty-foot redbrick bulwarks that surround the Huntsville Unit are no impediment for the ghostly convicts who haunt Texas’s oldest prison, which opened in 1849. The South Building—home to the state’s first death row—is vacant now, but its former residents continue to let their presence be known: One Halloween, a prison official used a voice-activated tape recorder to capture the sound of cell-block doors clanging shut as well as someone calling out, “Hey, captain. Hey, captain.” Guards once searched the old prison hospital after spotting a man walking inside. It was the same building from which Satanta, a Kiowa chief serving a life sentence, jumped to his death in 1878. But the most spine-tingling activity seems to occur in the unoccupied East Building. Correctional officers tell tales of confronting prisoners who disappear through walls. Others have reported hearing disturbing cries—perhaps from one of the 361 men who were put to death by Old Sparky.

Nestled among mesquite trees not far from the Rio Grande, this austere sandstone chapel was built in 1899 on land set aside “for the propagation of the faith among the barbarians,” but rumors about the unspeakable acts committed here continue to swirl. The horrific tale centers on a few priests and nuns who broke their vows of chastity with one another—then killed their babies to cover up their sins. The infants were buried on the property, but residents discovered the secret and stormed the church, brutally murdering two of the clergymen. Ghost hunters who’ve stayed in the chapel at night have picked up strange drops in temperature and claimed to have had run-ins with creepy robed figures.

The Galveston Historical Foundation would love to discuss the opulent Italianate architecture of this antebellum home. Unfortunately, visitors are more interested in the legend of the mansion’s most famous resident, Rebecca Ashton Brown. Born in 1855, Miss Bettie, as she was known, was a free spirit who loved entertaining, but she raised eyebrows for never marrying. And some ninety years after her death, she continues to surprise: To this day she’s been known to appear before guests on her staircase, decked out in a turquoise evening gown. In the most widely circulated tale, a groundskeeper stumbled upon Miss Bettie in a heated argument with a former suitor. Although the beautiful eccentric died from natural causes in her mid-sixties, Dash Beardsley, who runs Ghost Tours of Galveston, thinks there’s a reason Miss Bettie never left the building. “Any haunting is based on unfinished business,” he says. “She’s dead, but she might not know it.” And in one particularly bone-chilling photograph, a faceless nun appears in the doorway, where she is deep in prayer—and levitating several feet off the ground.

Shortly after Mitchel and Tami Whitington moved into this quaint house in March 2002, inexplicable things began to happen: They felt the sheets being pulled off their bed at night, the dead bolt on the kitchen door locked by itself, and a mirror in the dining room filled with condensation. Built in 1861, the Grove was the longtime residence of freed slaves Charlie and Daphne Young. In 1907 the Youngs’ son hanged himself on the back porch; in 1955 Daphne’s funeral was held on the front porch. “A friend stayed on our couch one night and saw a man walking around the room,” says Mitchel. “I dug up a photo of Charlie Young, and she said, ‘That’s the guy.’” And once, during a tour of the house, a woman held out a tape recorder and said, “If there’s someone here who has something to say, say it now.” There was no reply—but when the tape was played back, an old man’s voice could be heard saying, “I miss my family.”

Built of hand-hewn limestone by Norwegian settlers in 1886, this historic Lutheran church sits atop a pastoral slope just outside Cranfills Gap, about fifty miles northwest of Waco. Also known as the Rock Church, it has only been in sporadic use since the forties. But the high-ceilinged sanctuary has retained its splendor and, as the legend goes, its original congregants, many of whom are buried outside. Though some locals vehemently deny that St. Olaf’s is haunted, the stories persist: Muffled voices grow louder when you sing hymns, and ethereal orbs appear to be “sitting” in the pews. Jon McConal, a retired columnist for the Fort Worth Star-Telegram, remembers visiting one night and hearing footsteps “that sounded like they were made by a man with a peg leg” coming from the choir chamber on the second floor. He rushed upstairs, only to find an empty room.

The Devil’s Backbone near Wimberley

One of the most scenic drives in Texas is a five-mile stretch along Ranch Road 32 between Wimberley and Blanco. Known as the Devil’s Backbone, the narrow ridge has an elevation of 1,225 feet and offers an unparalleled view of miles of rolling ranchland. In fact, the Comanche and Kiowa used the spot to monitor settlers who were moving into their territory. The Indians’ ghosts are said to still roam the area, with hikers and hunters frequently reporting an unseen presence following them. Bert M. Wall, who has lived on the Devil’s Backbone for nearly 35 years, had heard stories about a wolf spirit that would possess people, but he didn’t believe them until his son went exploring with friends nearly twenty years ago. That’s when one of the boys, John Villa­rreal, saw a vision of a wolf that caused him to slip into a trance. “He was totally out of it, ranting in a language that sounded like a mix of Spanish and Apache,” says Wall, who suspects that the Indians were seeking vengeance for having been forced off their land. He’s also seen a Spanish monk on his porch and mysterious lights when he’s been out working cattle. “I’m convinced that old cowboys are checking up on us to see if we’re doing things right.” 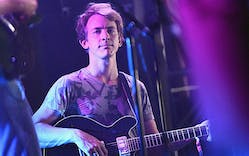