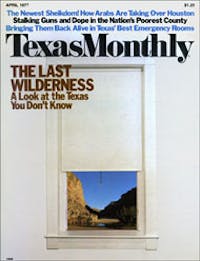 The last really obsessed treasure hunter in our area died two or three years ago at a reasonably advanced age, never having found any of what he was looking for as far as I have heard but having apparently enjoyed the quest all the way. I hardly knew him, for I’m not a native and obsessed people are hard to approach from outside the framework that produced them. He came around once, alighting from a lopsided old black pickup and announcing without much preamble that the Spanish had dug long galleries in a soft stratum of my hills across the creek and after filling them with silver bullion had plugged the entries and gone away never to return.

I said, “I didn’t think there were ever many Spanish around here, this is far north. The Comanches…”

“Hell, yes, the Comanches,” he said. “That’s why they left, them Spaniards. Couldn’t stick around here, and later on they couldn’t come back. Hit weren’t only the Indians but the Meskin Revolution too.”

“Well, how did you find out about it?”

Small dark eyes gone darker with secrecy: “I know lots of things they don’t nobody else know.”

I, with diplomacy that seemed to be needed: “I bet you do.”

“Crap, I know where they’s a great big old slab of rock, weighs maybe two ton, never been moved. And on the bottom side, they’s stuff carved in that rock. They’s an owl, and they’s a wolf, and they’s a woman. And she’s blonde and she’s got square titties.”

“If it’s never been moved, how did you ever…”

But I had overstepped, and the secrecy and suspicion moved over the whole thin, seamed face. “Yeah,” he said, and with a grumble got back in the pickup and drove off.

Other landowners seized his drift with more faith, though, and documents exist attesting to agreements to split treasure found on such and such premises at a rate of fifty-fifty betwixt owner of said premises and finder of said treasure. There is a very noble hole a few miles from my place, six feet in diameter and fifteen deep through solid limestone, with a tunnel taking off horizontally from the bottom God knows how far, which he and an aging farmer totally hooked on his visions dug with picks and crowbars and dynamite, intending to intersect some other chamber stuffed full of precious metals.

Spanish galleries aside, our hilly neighborhood southwest of Fort Worth is an improbable sort of place to be looking for such loot. In the first place its geology is sedimentary, with nearly level layers of limestone lying on top of one another down to considerable depths, interrupted here and there by flat beds of shale and clay and watersand and with no trace of the sort of volcanic activity that forces ores precious or otherwise up within greedy men’s reach. Hence, with little chance of lost mines and bullion of the kind that Frank Dobie chronicled, most legends and lore about treasure are likely to tell of human boardings squirreled away somewhere for posterity to find. But here we confront the cold-water fact that human wealth has never been very probable around these parts, either. Though the country itself was much more productive when virgin a century and more ago, it wasn’t even then the sort of land where surplus riches abounded to the point of often requiring canny concealment. Nor in the millennia before white settlement were there any inhabitants equivalent to rich Aztecs and Incas or to those fierce Scythian tribesmen of the Old World who buried kings and potentates with dozens of gold figurines and ornaments. There were only Tonkawas and other tough, impoverished, hunting-and-gathering Indians, eking out a living on berries and roots and game and decorating themselves alive or dead, if at all, with bits of shell and bones and animal fangs.

Certainly an occasional jar of silver dollars or paper money must have been secreted in a posthole or mortared beneath some limestone hearth after a good cotton crop or a small inheritance or the sale of a herd of cattle. I suppose it is on such events, rumored and exaggerated in families and clans, that most of such lore as we have had is based.  It is fading now as the old natives die off and their progeny move away to seek another sort of treasure at Brown and Root construction projects and auto assembly plants. Nor was it ever bruited widely, since those who knew it generally had hope of unearthing the trove themselves. But it existed, and if you spent any time nosing about in abandoned country houses, as I used to, you would sometimes find traces of somebody else’s search.

I once wrote about a land deal in which the seller reserved ownership of an old shack where a dead bachelor uncle of his had once lived. It wasn’t much of a structure, but the land’s buyer, a friend of mine, thought that maybe it had sentimental value for the old fellow and he was going to move it elsewhere. Not bloody likely. He camped there and dismantled it plank by plank and stone by stone, and when he was done he went away and left the whole mess lying on the ground. He had been looking for something whose existence was vouched for in family talk, though what it was and whether he found it, none of us ever learned.

Another legend attached to the premises occupied by a pair of spinster sisters up until the time of their deaths in the forties. They were all that was left of a family that had earlier been rich in the region’s terms, with ten or twelve sections of land, but that had all been squandered by their fathers and brothers, and the old ladies finished out their lives on a small barren corner of those once extensive holdings. One was paralyzed in the legs and the other maneuvered the invalid from bed to chair or table or elsewhere by grasping her around the waist from behind and dragging he about the house; the heels of her shoes, it is said, were worn quite round by this process.  Neighbors worked on the pair’s little rocky fields and the spinsters managed to live on their share of that, and were supposed to have thousands of ancestral dollars hidden away somewhere. The house was blown to pieces by a tornado not long after they died within a few months of each other, but people used to go there and dig, some of the later searchers bringing metal detectors and such paraphernalia. One difficulty with taking it seriously lay in the notable fact, commented on by a neighbor, that if they’d had any money at all, “you know damn well they’d a dug out enough to buy a wheelchair. Nobody’s all that tight.”

I guess it’s not really a paradox, though, that treasure legends seem to have flourished so well in poor or desert places, for the people in such places need more acutely than anyone else to believe in the possibility of things like treasure—in sudden and drastic alleviation of their lot. Thus the champion treasure believers of our continent are probably northern Mexicans and the rural Latins of Texas and the rest of the Southwest who are descended from them. And their lore in this as in other things tends to be much richer than its Anglo equivalent.

I knew an old Mexican lady living in a little Hill Country town who had second sight and who liked to tell stories of such matters with waving, carving hands and with flashings, squintings, and widenings of her very blue eyes. (And those eyes are another story: the Spanish father shot by revolutionists and the ranch-hand husband whom she married at fifteen because he said he would knife her if she didn’t, and the rest …) She and her husband when young had worked for a German rancher, a miser beyond compare. One night—the night of some specific saint’s day—when she went out of their shack for something, she saw beneath a pear tree in the German’s yard, a flickering flame like that of a candle, but blue. When she went closer it disappeared, but when she returned to her doorway and looked back toward the tree, the flame was there again. She mentioned it to the German the next morning, and he paled (she did too when telling of it, somehwow) and said with anger, Nein, nein, it could not be, do not talk about it. And the day after that, there was a big hole under the pear tree, with the imprint still in it of a jug or other round container that had been taken out. Two weeks later, saying there was not enough work to be done even though sheep shearing was coming up, the rancher fired them.

Which led to more tales, as Grandma Elizondo’s stories were wont to do, and I wish I had written them down instead of simply enjoying them and having to rely on hazy recollection now.

Another pear tree story has little to do with treasure, but the story does illustrate the sense of continuing ownership that country people can have about old family places, with or without attached treasure, even after they have been sold into strangers’ hands. The tree in question was a big one and bore juicy sweet fruit, possessing an immunity to the fire blight that attacks nearly all good pear trees in Texas. The place it stood on lay lost back in the cedar of our hills, with no public roads passing by to bring in drifters. An observant city landowner, having bought the land and tacked it onto his adjoining ranch, noticed the tree loaded with green fruit in the summer of his ownership. In autumn when the pears were due to be ripe, he came back and found it already stripped, with only a few culls still hanging from branches or lying on the ground. The next year the same thing happened, so the third year he kept a close watch weekend by weekend, and when most of the fruit was ready he picked it for himself, feeling a certain moral glee in the four or five bushels he got.

And the next fall after that, when he went to look, the tree had been chopped down.