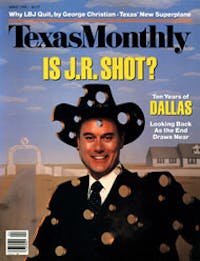 Just outside Austin at a place called Hudson’s on the Bend, chef Jeff Blank serves up solid, savory country fare—sophisticated food that sticks to your ribs.

By this time of year in the Hill Country west of Austin, the white flowers of the wild yucca and the pink-and-white blossoms of the plum trees are blooming in the back yard of Hudson’s on the Bend, Jeff Blank’s ranch house turned restaurant. On a mild spring morning the robust, red-haired Blank, wearing a white chef’s shirt and black-and-white-checked pants, rushes out to gather the edible blossoms. Stumbling over rusty old horseshoes, with no time to take in the peaceful view of the surrounding hills, he roams into the fragrant cedar and juniper bushes beyond the back parking lot to pick the yucca flowers that grow candelabralike from the desert plant.

Blank and his co-chef, Robert Hughes, use the flowers to garnish regional dishes that have won national attention for their homey three-year-old country restaurant. Smoked game, smoked fish, smoked just about anything, and abundant amounts of fresh vegetables and herbs are the trademarks of Blank’s wildly imaginative cuisine, which, appropriately enough for this part of the country, swings from Mexican dishes to German food. In recent months the up-and-coming Blank has garnered notices for his hearty, unpretentious Southwestern cooking in the New York Times and high-style M magazine and has appeared in the PBS series Great Chefs of the West. The publicity has brought the hardworking Blank and his small staff long-distance reservations from both coasts.

Four years ago Blank and his wife, Debby, were looking for a new restaurant concept and a new start. The chef, now 37, got his first taste of restaurant management during high school, when he managed the Beef’n Bun at Austin’s Lakeway Marina and hired his future wife to cook burgers. After attending hotel school at Oklahoma State University, Blank met chef Gert Rausch, a German trained in Europe and the founder of Austin’s Courtyard restaurant. Blank kicked around in various restaurants and eventually teamed up with Rausch and Robert Hughes, an old friend who had worked with Rausch, to open a restaurant in the Colorado ski country. But the snow failed to fall that winter of 1978; the restaurant closed. So Hughes took a sabbatical from the restaurant business (he went to Georgia to sell auto parts), and Blank managed a restaurant chain in Dallas, Houston, and San Antonio.

Then one day in 1984, while Blank was driving down Ranch Road 620 through the summer and retirement communities bordering Lake Travis about fifteen miles outside of Austin, he spied the ranch house near Hudson Bend Road. Blank got a group of investment partners to buy the old place and put in a septic tank, turned the garage into a kitchen, built a small oil-barrel smoker in the backyard, and gradually cultivated an extensive herb garden. He named the place Hudson’s on the Bend after a family that had held a large area of nearby land. Within a short time, Blank had his own nationally famous kitchen.

Looking like a forties roadhouse, the rambling limestone restaurant has a sun porch and a romantic backyard terrace furnished with tables and chairs and pots of flowers and ferns. The herb garden, from which Blank and Hughes borrow liberally, was built in part out of a concrete minnow pond the pervious owners had used for raising bait. The chefs choose from a healthy supply of sage, chives, rosemary, pungent Mexican oregano and Mexican marigold, aromatic lemon verbena and lemon balm, and several different kinds of thyme, mint, and basil. Dill or basil planted alongside the house, when added sparingly to Hughes’s white-wine sauce, help create a delicious accompaniment to fresh redfish or swordfish from the Gulf, as does a fish sauce made from the tart green leaves of sorrel. Later, after summer has arrived, Blank and Hughes will use the plum fruit to make dishes like German plum cake and the peaches from the backyard trees for a duck sauce.

How much a day’s menu at Hudson’s on the Bend leans toward Mexican chile sauces, German schnitzel, or classic beurre blanc (plainspoken Texans Blank and Hughes prefer to call it “white sauce”) depends on the cooks’ moods and the availability of ingredients. Blank’s smoked mallard with champagne-grape sauce might even be served with guacamole, pico de gallo, chips, and hot German potato salad. Or a Belgian white chocolate mole sauce might do for a while until Hughes, who prepares fifteen to twenty fresh sauces daily, gets tired of it or runs out of white chocolate – at which point he might come up with an idea like smoked-turkey-and-venison enchiladas.

Blank describes his and Hughes’ approach as “cooking by the seat of our pants” –they don’t even test a recipe before shooting it onto the menu. “We just sit down a couple of times a week and try to be creative,” he says. They also have a folksy openness to the advice of old-time Texas cooks and the contributions of visiting chefs, frequently German friends of Rausch’s. (Blank attributes his special method for smoking shrimp – he soaks it in sour creams to absorb more flavor in the smokehouse – to Freddy Bauer, a young German chef who spent time in Hudson’s kitchen a couple of years ago.)

“There are very few real chefs in the world – maybe six – who actually create new ideas and new cooking techniques,” Blank says matter-of-factly. “We don’t have any secrets. We’re always happy to give our recipes away. Most of what we’ve done has already been done before. Our ideas come from other people and books.” Blank mentions chefs Dean Fearing of Dallas’ Mansion on Turtle Creek and Robert del Grande of Houston’s Cafe Annie as two prominent sources of inspiration.

While Blank and Hughes’s concepts may occasionally seem off the wall (the duck served with guacamole and German potato salad, for example), their execution generally reveals a light, sensitive hand. Nevertheless, the duo believes in hearty, stick-to-the-ribs food served up in generous portions. No evanescent nouvelle cuisine here. “I think people are moving away from lighter cuisine,” says Blank. “Heavy American foods are coming back.”

Although the spring and summer dishes at Hudson’s do reflect lighter fare – cold smoked trout, smoked tuna, smoked shrimp salad, cold watercress soup, and tossed salad with flowers and herbs – one constant runs through the menus, whatever the season. The emphasis is almost invariably on cuisines and foods indigenous to Texas and the Southwest. “A lot of dishes are created by trying to make the most of our products,” Blank says, “which is the European and south-of-the-border style too.”

It is from that desire to capitalize on regional products that Hughes and Blank developed their Texas-style cuisine. “We got in contact with agriculture commissioner Jim Hightower and started talking about Texas ingredients,” Blank says. Local products – such as game and Dripping Springs goat cheese and white morel mushrooms from the Hill Country – naturally led to ethnic dishes. The restaurant’s shrimp quesadillas, for example, are based on a Yucatán dish. But Blank and Hughes use a pecan-smoked shrimp, slices of avocado, and a mixture of equal parts Monterey Jack and Dripping Springs goat cheese.

The restaurant’s game – boar, antelope, axis, fallow and sika deer, raised pheasant, turkey, quail, and duck – is purchased from the Texas Wild Game Cooperative and R&B Quail Farms. Blank introduced game to his patrons slowly, eventually becoming bolder and more experimental in his menus and meanwhile developing his smoking techniques. The restaurant’s original oil-barrel cooker quickly proved to be inadequate, and Blank built a limestone smokehouse for hot smoking and attached an old Franklin stove to the front for cold smoking. Smoking methods are basically the same the world over, he points out, though the kind of wood used and the additions to it for flavor vary from region to region. Blank favors pecan, a sister of the hickory tree, over oak or mesquite because of its low creosote level and mild flavor. “It’s a much rounder smoke,” he says, “like a dry Chenin Blanc.” Hughes and Blank enjoy smoking foods so much that they have to restrain themselves. “We find ourselves doing it too much,” says Hughes.

Actually, Blank prefers not to cook meat and fish entirely in the smokehouse. The traditional Texas method of smoking meat for days and basting it with thick sauces is designed to mask the taste of inferior meats, he explains. Blank smokes fish and game just until rare, then finishes them up quickly on the open wood-flame grill in the small kitchen, where he and Hughes and a small staff of three or four helpers preside over the preparation and cooking of the evening meals. The staff is small in part because Blank and Hughes do just about everything themselves, except mop the floors and wait on tables. They order the food, stuff sausages, make stocks, take inventory, and plan catered menus – “the whole nine yards,” says Blank.

In another moment the quiet of this Hill Country morning will again be broken as Blank or Hughes bursts out of the kitchen with a bang and runs to check on the game and fish in the smokehouse.

By noon Debby Blank is calling for the menu of the day so she can write it and print it up. Outside, thick clouds of pecan smoke waft over the dry cedar hills toward the city. In the garden aromatic herbs send up their rich scent, and the plum flowers flutter in the breeze. And as always in every season, Jeff Blank and Robert Hughes are in the kitchen, saying, “Hey, let’s try this.”