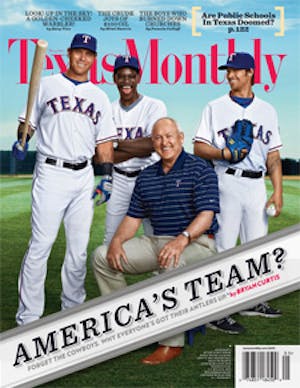 Whether writing about hardscrabble lives, skewering politicians, or playing a reformed drug addict on HBO’s The Wire, Steve Earle has always placed his straight talk under a dark cloud. I’ll Never Get Out of This World Alive (New West)—also, confusingly, the title of Earle’s unrelated new novel—is produced with sonic clarity by T Bone Burnett and his usual stable of session men. But though the record marks a return to Earle’s early country-rock sound, sung in the thick Texas drawl he developed during his Schertz boyhood, it also represents something of a departure. Earle wrote these songs in the wake of his father’s death. That sad event, combined with his happy 2005 marriage to singer Allison Moorer, his recent immersion in the work of his mentor Townes Van Zandt, and his political mellowing since George W. Bush left office, seems to have humbled him. Earle is now more of an objective observer and, as a result, a better storyteller. Not everything here follows that model (enough with the love songs about your wife!), but the New Orleans street grit of “Meet Me in the Alleyway” and the civic defiance of “This City” rank among his most memorable works, as does the lead song, the soaring, autobiographical “Waitin’ on the Sky.” “Didn’t know that I was gonna live this long,” he sings with surprising joy. “Now I’m sittin’ on top of the world.” With his usual lack of optimism, Earle says these songs are about mortality, but they feel much more about life in the here and now.