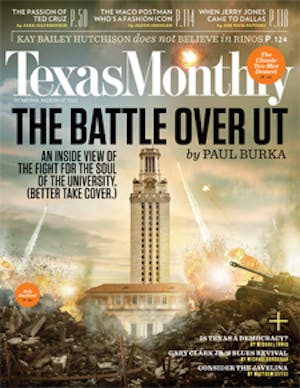 Last month, just as Tim McGraw was about to sit down for his post-set interview in the Austin City Limits studio, his eyes wandered toward a framed photo of George Strait’s first appearance on the PBS concert showcase. The country superstar immediately ran back to his dressing room, grabbed his wife, Faith Hill, and showed her Strait’s baby face, beaming from beneath a tall white cowboy hat.

“The photo was from thirty years ago, our 1982 season, when George was touring his debut record,” said Terry Lickona, executive producer of Austin City Limits, the longest running music show on television. “It’s kind of funny to think the headliner that night was Tompall & The Glaser Brothers. There are definitely times when taking a leap on young, unproven talent works out for everyone.”

Lickona says he has his fingers crossed that a new crop of talent taping the show this year will make ACL’s bookings look just as prescient down the line. Of the twenty acts scheduled for the soon-to-air 38th season of Austin City Limits, only five have taped the show before. This year’s rookies range from the bluesy young upstart Gary Clark Jr. to the hugely popular indie rockers Bon Iver to legends like McGraw.

“New faces and first-time appearances are key to our survival,” Lickona said. “We hear all the time from viewers that might not like a certain show one week, but come back a week or two later and find something new that they fall in love with.”

In advance of this season’s October 6 premiere, we asked Lickona to handicap some of this year’s freshman class.

“It’s just the two of them up there,” Lickona said. “But the power of the music and the chemistry between them overcomes whatever concern somebody might have visually about it being boring television. We knew that close-up, under the scrutiny of our cameras, you’d see that chemistry really come alive. They have a way of drawing you in that’s anything but boring.”

Mavis Staples
As a member of The Staple Singers, Staples is a Rock and Roll Hall of Famer and Grammy Lifetime Achievement Award winner. Her most recent solo album, 2010’s You Are Not Alone, was produced by Wilco’s Jeff Tweedy.

“There are certain artists that by the time they get to do the show I’m riddled with guilt when I meet them,” Lickona said. “But Mavis doesn’t have a bitter bone in her body. And there’s no good reason as to why she’s never been on. The timing just never worked out. We taped her the same night as Bonnie Raitt, and that’s a perfect fit. When Mavis appears in Bonnie’s set it’s really pretty special.”

“Historically, our show is very minimal visually,” Lickona said. “By now, even bands accustomed to huge production leave it boxed up. Radiohead really flew by the seat of their pants and didn’t make a set-list until that afternoon, making a pretty exciting show even more exciting.”

“She told me she almost fainted when I asked her to do the show,” Lickona said. “So we didn’t know if maybe she’d freak out the night of the taping. Then again, the artists that tell us they’re really nervous—like Tim McGraw or Chris Martin of Coldplay—aren’t the ones you’d expect. But she’s spellbinding. The only crowd we’ve seen recently that was close to being as quiet was Randy Newman’s. For Kat, you could hear a pin drop.”

Alabama Shakes
Formed in Athens, Alabama, and led by the powerful soul singer Brittany Howard, this four-piece band brought a lot of buzz to last year’s South By Southwest. Their ATO Records debut, Boys & Girls, was released in April.

“I broke one of my biggest rules by booking them without having seen them live,” Lickona said. “But we taped during SXSW and wanted to capture the spirit of what the festival is about, which is really exciting new acts. If they have the kind of career people think they’re going to have, we have a piece of really great archival footage.”

Tim McGraw
One of the most dependable country music artists, McGraw has sold more than forty million records. He spent his summer touring stadiums with Kenny Chesney.

“There was a time we booked so much country that some Austin musicians referred to us as Nashville City Limits,” Lickona said. “Now, we may do one big country artist a year, like Miranda Lambert last year. The thing about Tim that really appealed to me is the way his live show connects with his fans. Everybody here decided it was the liveliest crowd this year, louder than bands like Arcade Fire or Coldplay had last year. For a high-energy artist, a lively crowd can make for great television. This was that.”