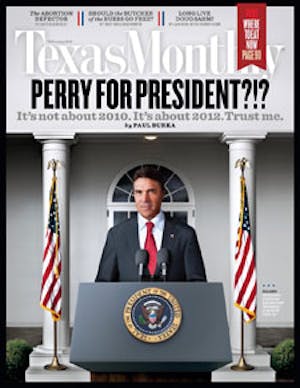 February 3, known in college sports circles as National Signing Day, marks the official end of high school football recruiting season, when senior stars from around the country sign letters of intent to play at the colleges of their choosing. The day used to carry more drama, but recently it’s become a final formality because most of the questions around the recruiting process have been answered by that day. Many players announce their intentions before their final season begins to better relax and enjoy the last year of high school. Others make a showy declaration at one of the nationally televised high school all-star games: They wave their hands like a magician over an array of baseball caps, each with a school’s logo on it, before finally snapping one up and putting it on their head to emphasize their choice.

This year, however, the two top players in Texas waited until the final moments before National Signing Day to choose a school. Lache Seastrunk of Temple High School, a speedy and elusive running back, and Jackson Jeffcoat of Plano West High School, a strong and athletic defensive lineman, were the final two holdouts among the state’s best players. On January 27, one week before signing day, Seastrunk announced he was attending the University of Oregon in a ceremony at his high school gym. Two days later, in a similar setting in Plano, Jeffcoat chose the University of Texas. The paths each took to arrive at a decision, however, were quite different.

Lache Seastrunk always stood out around Temple. It wasn’t just his name (pronounced “lake”), which mom Evelyn chose because she wanted something unique. By age 13, he was one of the city’s top athletes, starring in football, basketball, and track at Travis Middle School. Friends compared him to the Roadrunner cartoon for his ability to go from a standstill to top speed in the blink of an eye. In high school Seastrunk ran for more yards and scored more touchdowns than anyone in the history of Temple High. Highlight reels of his thrilling runs were watched more than 100,000 times on YouTube. And top college football programs from across the country came calling for his services.

But along the way, Seastrunk developed a reputation for being immature and goofy. Early on, he said he had thought of a “super funny” way to handle the ceremony where he announced where he was going to school. And at a gathering of recruits visiting Auburn University, Seastrunk was caught on camera making fun of Nick Saban, head coach of Auburn’s top rival, the University of Alabama. (“Tell Nick Saban he’s SOL!” he yells from the background.) Seastrunk later called Saban and apologized, but critics still pointed to the incident as an indication that Seastrunk wasn’t taking the process seriously and was looking for attention.

None of that is particularly damning, nor is it surprising behavior for an 18-year-old kid dealing with reporters, fans, and coaches from across the country in today’s heated recruiting environment. And it’s not like antics during the recruiting process are anything new. Twenty years ago, Dallas’s Carter High School had one of the top teams in the state, loaded with talented seniors. On signing day, TV cameras rolled as linebacker Jessie Armstead chose the University of Miami at a gathering at Dallas’s swanky Loews Anatole hotel, while across town teammate Derric Evans sat in a hot tub as he signed his national letter of intent with the University of Tennessee.

But the tag stuck to Seastrunk, then a poor set of practices at the U.S. Army All-American Bowl all-star game dropped him down in the rankings of national recruits. Still, when it came time to commit to a college, Seastrunk had several big-time schools to choose from. He passed on offers from University of Southern California, Auburn, LSU, and Memphis to become an Oregon Duck.

“I think this is the best fit for me and will allow me to grow as a person,” Seastrunk said, blowing a toy duck call as friends and family cheered.

While Seastrunk attracted recruiters with his quickness, Jackson Jeffcoat drew their eye with his size and rangy movements. He stands 6 feet, 4 inches tall and weighs 230 pounds, putting him right in the sweet spot of physical characteristics that coaches look for in speed-rushing defensive ends and backboard-crashing power forwards. Jeffcoat fits both of those roles, having played on the varsity football and basketball teams at Plano West since he was a freshman.

If Seastrunk’s recruitment carried an air of silliness, Jeffcoat’s appeared to be all business, marked by measured updates from his family about the latest developments in choosing a school. In the weeks leading up to his final decision, the Jeffcoats announced that Jackson had cancelled a planned visit to the University of Florida, which effectively eliminated the Gators from consideration. Then they passed on USC after head coach Pete Carroll left the school. Arizona State, where Jeffcoat’s father was a star college player, was cut when the list was narrowed to three finalists: Texas, Oklahoma, and Houston.

Jeffcoat benefited along the way from the counsel of his father, Jim, who was heavily recruited himself in the late 1970s as a high school All-American at Matawan Regional High School in New Jersey. Jim later played 12 seasons for the Dallas Cowboys, winning two Super Bowls along the way. He’s now an assistant coach at the University of Houston and his position there kept the Cougars in consideration for Jackson’s services until the end.

Jeffcoat’s commitment to Texas capped a heated recruiting battle between the Longhorns and Sooners that sparked a new rumor almost every day. Some thought Oklahoma had the inside track because his twin sister, Jacqueline, is headed there on a basketball scholarship. Others thought OU might hire Jim Jeffcoat away from Houston, easing the way for Jackson to go to Norman. A few days before Jackson made his NCAA-sanctioned visit to the OU campus, Texas head coach Mack Brown visited the Jeffcoat family at their Plano home. That helped secure Jeffcoat for the Longhorns, whose 2010 recruiting class ranks among the best in the country. Jeffcoat said that after taking his time choosing a school, he felt he had made the right decision.

“I felt most comfortable at Texas,” he said. “It’s not that I didn’t feel comfortable anywhere else; everywhere else was great. That’s why it was such a hard decision and it took so long.”