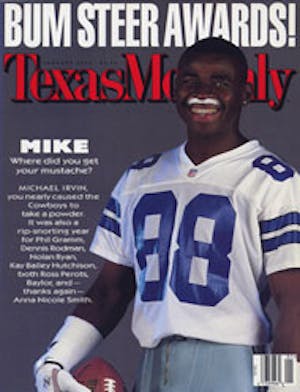 IN NOVEMBER WE PUBLISHED A RANKING of 3,172 public grade schools in Texas, giving each school one of five grades, from four stars (the best) to no stars (the worst). This article provoked an unusual amount of mail. Some of the letters were barely restrained victory whoops from people connected with high-ranking schools. However, unsurprisingly, our mail proved that not everyone agreed with our rankings.

Most of the disagreements criticized our reliance on the Texas Assessment of Academic Skills (TAAS). This test is currently given each spring to students in grades three, four, five, six, seven, eight, and ten. Our ranking awarded stars based on a formula that compared an elementary school’s TAAS scores with those from other elementary schools across the state that had a similar percentage of students from poor households. Few complained about our grouping schools by economic status, but many complained about the TAAS, and their letters were filled with emotion. One of the many impassioned letters came from Donna Trevino, a teacher from Wichita Falls, who wrote, “It’s time we admit that the TAAS is not performing the function it was meant to perform and start to wake up to the fact that the TAAS, an assessment tool for rating teachers, puts undue pressure on our children, who have ‘Ace the TAAS’ beaten into their heads a full eight months of the year, who are bribed with gifts of candy, toys, and field trips to perform well on the test, and who are being taught test-taking skills before or even instead of anything of real value.”

David Cross was more analytical, as befits the chair of the psychology department at Texas Christian University: “First, the tests do nothing for capable students (my children routinely pass all or nearly all of the items—what’s the use?). Second, the tests are representative of nothing children will do when they finish school and, as a result, have no predictive validity. Third, as a parent, I do not know who makes up this test, for what purpose, or using what criteria. Its validity is unknown, yet it is the driving force for education in my children’s schools.”

But the letter that best expressed the most common criticism of the TAAS came from Lea Turner, a teacher in Hico. She wrote, “1. Some schools have cut everything from the curriculum except the TAAS. They no longer teach social studies, science, art, etc. There is no ‘well-rounded’ education. 2. Much time is wasted teaching test-taking skills to third and fourth graders that could be better spent teaching things they really need to know. 3. So much pressure is put on teachers to get their students to pass the TAAS that illegal techniques of helping the students are rampant. . . . As a result, our students look smarter on paper but have less knowledge to show for the time spent in the classroom.”

A selection of other letters is in Roar of the Crowd on page 16. Usually we reply to letters there, but in this case the criticisms were so consistent and the issues they raised so important that it seemed best to break with the usual order of things and answer some of them here. Our rankings depend entirely on the TAAS. If it is critically flawed, then the rankings are critically flawed as well. The main complaints seem to be these three:

Too many schools are teaching only what is on the TAAS to the exclusion of everything else. For all the criticism, often justified, that the Texas Education Agency (TEA) must endure, it has developed a reasonable curriculum for the state’s public schools. It emphasizes reading, writing, and mathematics. These subjects are broken down into a multitude of specific skills, and then each skill is designated to be taught in a certain grade—multiplication at one point, manipulating fractions at another. Each spring, as the end of the school year nears, the TAAS simply determines whether the students have learned the reading, writing, and problem-solving skills they were supposed to learn in that grade that year.

What can appear to be “teaching to the test,” as critics call it, may simply be teaching the curriculum mandated by the TEA. I believe the best way to answer this criticism is to stand it on its head, to say that one of the most beneficial results of the TAAS is the discipline it has imposed on the subjects taught in the classroom. At a district meeting, one teacher of an early grade proudly announced that she had spent much of the past three weeks drilling on Roman numerals. Now, Roman numerals are a good thing to know, but they are not tested on the TAAS because, quaint as they may be, Roman numerals have little or no utility in the modern world. Other knowledge and other skills are more important according to the TEA, the TAAS, and I believe, the great majority of parents. This teacher’s students would have been better served had she done exactly what the critics say and taught to the test.

Certainly, there are important things in life and in school that are not on the test. There’s music; there’s art; there’s that old favorite from everyone’s school days, “getting along with others.” In a normal class the teacher should spend from two thirds to three fourths of class time on the TEA curriculum, so there is time for students to learn much else. But of all the important lessons a student can learn, surely the subjects on the test—reading, writing, and arithmetic—are the most important and should command the better part of each school day.

The TAAS doesn’t test what students really know or what they need to know. I have some sympathy for David Cross, who wonders what exactly is on this test that determines so much of his children’s education. The tests are closely guarded for obvious reasons. But the subjects the test covers are no secret; they’re all in the public, mandated TEA curriculum. The scores on the TAAS are consistent with the scores on national tests. There has been no successful challenge, legal or otherwise, that questions its validity. All the available evidence says the TAAS is a fair and accurate test of the subjects the TEA wants students to learn.

That said, the emphasis on passing the test is a bit misleading because it’s important to know everything on the test, not just 70 percent of it. Comprehending 70 percent of what you read is better than comprehending 0 percent, I suppose, but no one can progress far without knowing 100 percent. The TAAS is not graded on a curve. Every student could make a perfect score. Perhaps someday they will. Scores, while often disappointing, are going up. In 1994, for example, only 45 percent of the sixth-grade students from poor households (“economically disadvantaged” in the language of the education bureaucracy) passed the mathematics section of the TAAS; last spring 66 percent passed. As to those who wonder whether the TAAS tests things students really need to know, I simply throw up my hands. Students shouldn’t know how to solve problems? How to understand what they read?

There is rampant cheating or at least gross manipulation in many schools to improve scores. There is cheating. The question is how much. Rumors of cheating proliferate, but there are certainly many more rumors than actual incidents. The TEA investigates suspiciously high scores, schools that turn in papers with multiple erasures changing wrong answers to right, schools with a large number of absences on test-taking days, and the like. As a result, there are people who used to be principals and are principals no longer. Still, one weakness in the system invites cheating: Teachers give the test to their own classes. If an independent agent were to give the test, this temptation and opportunity to cheat would be eliminated. And, of course, bonuses for individual teachers shouldn’t be tied to the test results. That only adds to the existing temptation.

A school can also cheat by inappropriately excluding students from taking the test. Many students, about 15 percent of the total statewide enrollment, are properly excluded because they don’t speak English, because they are in some form of special education, or for a number of similar reasons. The intent is to test only the students capable of learning the material and of taking the test. A principal, faced with a number of difficult students who might pull down the school’s score, can be tempted to push them into special education or some other exempt category. The TEA has tightened procedures for granting exemptions, and 70,000 more students took the test in 1996 than in 1995. But the problem is with us and may never be completely resolved.

Teachers and principals continue to see the TAAS as a club wielded against them rather than what it is—a tool that can work for them. It can show the current level of their students, where they are weakest and strongest, and by extrapolation, which methods of teaching work and which don’t. Schools like Carl C. Waitz in Mission, which was featured in our story, use the TAAS in exactly this way.

But whether a club or a diagnostic tool, we should be grateful that the TAAS is here to stay. For years people in education knew which school districts and which individual schools were performing poorly, yet nothing changed. The TAAS gave a public and credible rating to each school and each school district. That public information produced pressure from outside the education system to change. It was knowledge revealed by the TAAS that caused the education system to do something it was uncomfortable about doing, and that was change its ways. Low-performing schools, publicly known as such by their dismal scores, suddenly found ways to improve, and the test scores improved too. While only 52 percent of the tenth-grade students who took the test in 1994 passed, 60 percent passed in 1996. That is still unacceptably low, but the dramatic improvement, goaded forward by the TAAS, shows that we should stay the present course.